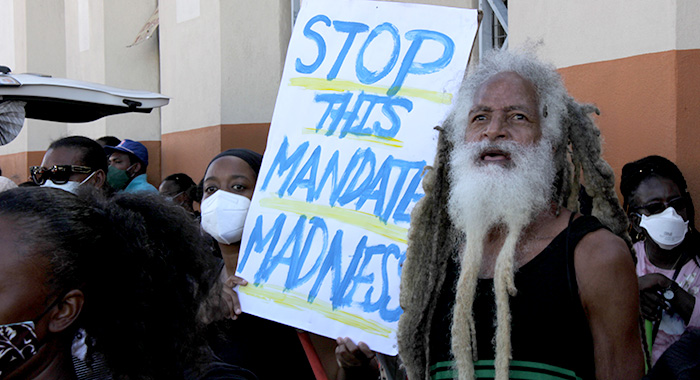 The St. Vincent and the Grenadines Teachers’ Union has called for more protests in Kingstown from 1 p.m. today (Monday) as Parliament meets.

The union continues to highlight its opposition to the government’s mandatory COVID-19 vaccination policy for “frontline” workers, which includes teachers.

A number of teachers are at risk of losing their jobs over the mandate, which came into full effect on Dec. 3, after a 10-day grace period.

Hundreds of people, including vaccinated and unvaccinated teachers, responded to the union’s call to protest in Kingstown on Friday.

President of the union, Oswald Robinson, told iWitness News at Friday’s demonstration that the public’s response to the union’s call was “overwhelming”.

“I am very happy that the parents, the teachers, all workers, the unemployed, everybody who loves teachers came out and showed their love.

“I am excited; I am happy. And we are preparing for the next round. This is just the smoke; the fire is behind. We are waiting until the Parliament is going to meet,” Robinson told iWitness News.

“Because they shifted the Parliament because they know this one was coming. If you run from the jumbie (ghost), you muck up with the coffin.”

The highlight of today’s meeting of Parliament is expected to be the debate on the Estimates of Revenue and Expenditure for 2022.

Robinson told iWitness News that his union is preparing to sue the government should any teacher be fired as a result of their unvaccinated status.

“The legal instruments are being prepared. The lawyers are finetuning it. I should be signing sometime soon to give the final say in terms of what is going forward.

As of Friday, 57,295 doses of COVID-19 vaccines were administered in St. Vincent and the Grenadines.

There are 504 active cases of the illness in the country.