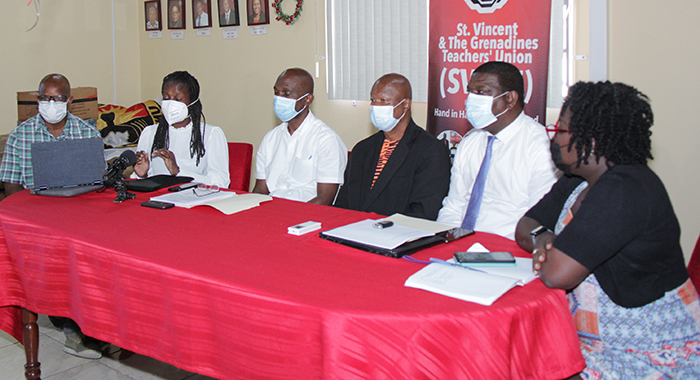 Lawyers representing the St. Vincent and the Grenadines’ Teachers Union, the Public Service Union, and the Police Welfare Association have filed legal challenges to the government’s vaccine mandate.

The mandate has seen some 200 public sector workers terminated from their jobs after they did not take or did not prove to the government that they had taken a COVID-19 vaccine by Dec. 3, as the government mandated by statutory rules and orders (SR&O), a law passed by Cabinet.

“Today is a very important day because today, we filed a notice of application for leave to apply for judicial review of the actions which were taken by certain state authorities,” Jomo Thomas, lead counsel in the matter, told a joint press conference of the unions in Kingstown on Monday.

“We want to make clear as well, that this is a joint application, that while we are applying for judicial review, we are also alerting the court to the fact that we are bringing a constitutional motion, which says that all of the actions which the government has taken, including the declaration of the public health emergency is unconstitutional, illegal and void, because the government did not follow the proper procedure in keeping with the declaration of an emergency,” Thomas said.

He said that the legal team is asking the court to review the decision of the Minister of Health, the PSC, and the Commissioner of Police to terminate Shanile Howe, Novita Roberts, Cavet Thomas, Alfonzo Lyttle, Brenton Smith, and  Sylvorne Olliver.

The application for judicial review says that Howe and Roberts, both of Sion Hill, are primary school teachers; Thomas, of Questelles, is a senior customs officer,  Lyttle, of Paul Over,  is an assistant supervisor employed with the Customs and Excise Department,   Smith, of Brighton, is a Station Sergeant of police, and Olliver, of Clare Valley, is a corporal of police.

Thomas said:  “And we are looking for a review of the decision of the first respondent to make rules under Regulation 5(1), 8(1) and 8(2) of the statutory rules of orders number 28 of 2021, which was cited as Public Health Public Bodies, special measures rule 2021.

“And we are also looking to review the decision of the second and third respondents as well as the first the terminate the employment of the [Shanile Howe, Novita Roberts, Cavet Thomas, Alfonzo Lyttle, Brenton Smith, and  Sylvorne Olliver] by way of letters which they received over a certain period.”

Their are 16 grounds of the application, including that the personally affected or have sufficient interest in the subject matter of this application.

The application says that Howe, Roberts, Thomas, Lyttle, Smith, and Olliver have all been debarred from attending their workplaces for a period of excess of 10 days and by way of letter, the PSC and the Commissioner of Police  terminated their employment without providing them with an opportunity to be heard.

“The application of Regulation 31 among other things has the effect of depriving the applicants of their accrued pension and benefits arising from decades of service pursuant to section 6 of the Pension Act Chapter 272 of the Laws of St. Vincent and the Grenadines.”

The legal team says that to date, six of the applicants and over 150 other public officers have been deemed to have abandoned their jobs.

It says that Section 43(B) (2) of the Public Health Act (Amendment) Chapter 300, on its face, grants the Minister power to implement special measures to mitigate or remedy the health emergency declared under section 43B (1).

“The clear purpose of the measures is that the [the Minister of Health, Wellness and the Environment[ is empowered to make under section 43B (2) aforesaid is to ensure public safety during the period of the Covid-19 Pandemic.

“Further, section 43B envisages that the measures the first Respondent is empowered to make, shall be of temporary duration  and remain in effect until it is declared  that a Public Health emergency has ended pursuant to section 43B (3).

“The rules made under Regulation 8(1) and (2) are outside the statutory mandate in that they touch and concern the consequence on the employment contract where a relevant employee refuses or otherwise fails to take the vaccine.”

The lawyers are arguing that the decision of the Minister of Health, Wellness and the Environment was irrational and unreasonable in so far as no reasonable decision maker would force such a large number of public employees to take the vaccine in circumstances where (i) the efficacy of authorised vaccines has significantly declined; (2) where the long term adverse effect of the vaccines are unknown and possibly dire; (3) the known adverse side effects of the vaccines are serious.

“Further, there is no rational connection between the temporary public health measure under the said SRO and treating an employee who refuses to take the vaccine as having abandoned his or her job and permanently terminated at the instance of the employee.  The SR&O is disproportionate in so far as less intrusive measures could have been taken to achieve the purpose for which the first Respondent was given the power to make rules,” the application says.

The applicants intend to seek, among other thing constitutional reliefs by asking the court to declare  that   section 43B of Chapter 300 of the Public Health Act (Amendment), insofar as it grants power to the Minister of Health to declare a Public Health Emergency, is contrary to section 17 of the Constitution and is therefore null and void.

They are also seeking a declaration that Statutory Rules and Orders No. 38 of 2020 cited as the Public Health Emergency (Declaration) Notice 2020, which was made pursuant to the purported power of the Minister of Health to declare a public health emergency under section 43B, is contrary to section 17 of the Constitution and is therefore null and void.

Finally, they are seeking a declaration that the Statutory Rules and Orders No. 28 of 2021 cited as the Public Health (Public Bodies Special Measures) Rules, 2021 and established pursuant to the purported power of the Minister under section 43B of the Public Health Act Chapter 300 of the Laws of St. Vincent and the Grenadines are unlawful, unconstitutional and void.