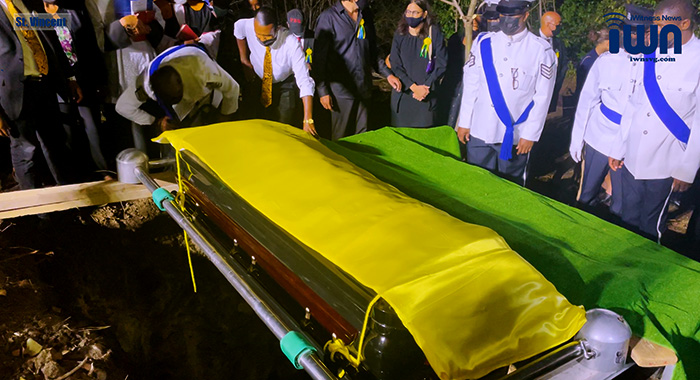 Sir James Mitchell, the second prime minister of St. Vincent and the Grenadines, was buried in his family’s cemetery in Bequia on Saturday, Dec. 18, 2021, with his face towards Isle a Quatre, an island owned by his extended family for generations.

The burial, in keeping with his wishes, means that “Son” Mitchell, as he was affectionately known, was laid to rest with his back towards the grave of his ex-wife, Patricia “Pat” Mitchell, the only other obvious tomb at the family plot.

Unlike many of the nation’s prominent citizens lying in concrete tombs in Kingstown, Sir James’ casket was lowered into a grave dug into rock under the thin topsoil.

Sir James was laid to rest on his home island after a state funeral, part of which took place in Kingstown, where he occupied the seat of political power for the 16 years ending October 27, 2000.

At the harbour in Kingstown, the ferry waiting to take Sir James’ body to Bequia is docked facing a cruise ship bringing visitors and much needed cash to St. Vincent.

Both vessels are berthed at facilities that Sir James’s government constructed.

Sir James’ body was then ferried to Bequia, his home island, where he died on Nov. 23 — 90 years after his birth there.

The announcement, after his birth, that it was “a son” earned Sir James a nickname that he carried for his four scores and 10.

In keeping with Bequia’s sailing tradition, ferries docked in Port Elizabeth blare their horns in a final salute to the man who represented the Grenadines in Parliament for three decades.

The Bequia Youth Sailors took their 28-foot sailboat to Kingstown Saturday morning and sailed back to Bequia, in the wake of the ferry transporting Sir James’ body as well as the nation’s main Coast Guard vessel.

Scores of people, including visitors to Bequia, gathered under The Almond Tree, in Port Elizabeth, where the police band played two songs — in keeping with Sir James’ wishes.

It was a fitting stop as this was the place where Sir James had delivered some of his earliest political speeches on his way to occupying the most powerful political posts in the nation.

Among the hymns sung as the service continued at the St. Mary’s Anglican Church in Port Elizabeth was “We Have An Anchor”. Metaphors about the sea and sailing take on special significance in Bequia — especially at the funeral of a man whose father was lost at sea 80 years earlier.

Sir James’ funeral may long be remembered not only for its length — about 11 hours.

Historians would also note that despite the COVID-19 pandemic, there were in-person tributes from three sitting prime ministers — Ralph Gonsalves, of St. Vincent and the Grenadines, Keith Mitchell, of Grenada, and Mia Motley, of Barbados.

There was a video tribute from Sir Kennedy Simmons, former prime minister of St. Kitts and Nevis — one of Sir James’ contemporaries

The service also heard tributes from Godwin Friday, SVG’s leader of the opposition and president of the New Democratic Party (NDP), which Sir James founded in 1975.

There were also tributes from Sir James’ children and grandchildren as well as other members of his close circle.

More spontaneous tributes came from regular citizens, such as Franklyn Boucher, a taxi driver, who spoke to iWitness News as he waited in his taxi to take mourners from the church to the burial site.

The tributes that formed part of the funeral service were broadcast live. However,  many people were constrained to standing in the street or outside the church as their final mark of respect.

Among them was Darnley Hazell, of Paget Farm, Bequia, which has been heralded the “Rock of Gibraltar” of Sir James’ political support and that of the NDP.

Sir James was buried at a time when Bequia, as with the rest of St. Vincent and the Grenadines and the world, is  battling the economic fallout from the COVID-19 pandemic.

With more people on Bequia than usual, fruit vendor Maguette Cunningham, paid tribute by wearing an NDP t-shirt from the 2020 election campaign and a broach with Sir James’s photo — even as she tried to capitalise on any additional sale.

In the autumn chapter of Sir James’ life, there had been questions about his relationship with the NDP  in light of public squabbling he had had, before 2017, with his successor, Arnhim Eustace.

However, he had spoken of the party in terms that suggested that the party was extremely dear to him — a personal possession, even.

In 2020, he was in vocal support of the NDP, but criticised the party recently for its position against mandatory COVID-19 vaccination.

And, possibly to ensure that there was absolutely no doubt regarding where his heart was politically when he died, a yellow cushion was strapped to the top of his coffin before it was lowered into the grave.

Yellow is the colour of the NDP…

On Saturday, Dec. 18, 2021, about 7:40 p.m. — uncharacteristically late in St. Vincent and the Grenadines — Sir James was crowned with roses, his grave illuminated by floodlights, even as the  full moon held Bequia in its silver embrace.

With the burial of Sir James, St. Vincent and the Grenadines closed a chapter in its history, paying its final respects to the last remaining parliamentarian at the time of Independence, 42 years ago.

One reply on “VIDEO: Symbolic messages at Sir James’ burial”