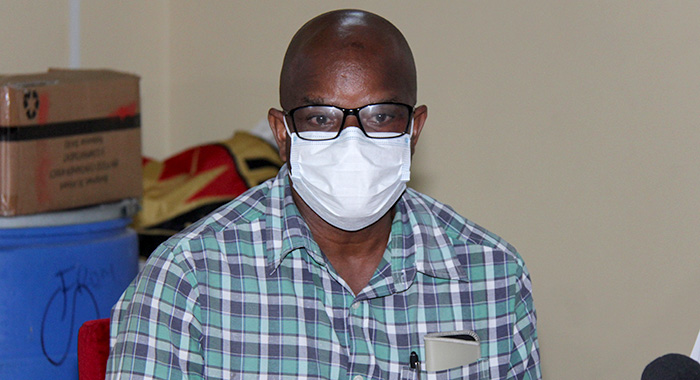 President of the Public Service Union, Elroy Boucher at the press conference on Dec. 20, 2021. (iWN photo)

The Public Service Union says that the EC$500 bonus that Prime Minister Ralph has announced for nurses should be extended to all public sector workers.

Elroy Boucher, the union’s president is questioning whether the payment to nurses only is tantamount to Judas’ 30 pieces of silver for betraying Christ.

Speaking on WE FM on Dec. 19, Gonsalves said that when he returned to Kingstown from Havana four days earlier, he spoke with the Finance Minister, Camillo Gonsalves then authorised the payment of the EC$500 honorarium each to nurse.

At a press conference the following day, Boucher, whose union represents nurses, was asked to comment on the honorarium.

“We actually welcome a bonus or something. In fact, we had proposed — and I’m not sure if that was ever sent —that something be done with respect to the frontline workers. We know they have been going through since 2019, when all of the other governments have found it within their hearts to recognise the hard work by all workers who are on the frontline.”

Boucher said that at that time, it was solely airport employees before the government expanded the list of frontline workers.

“And we know that they … have toiled all during the the beginning of the pandemic, without vaccines, with very little PPEs. And we thought that really, there should have been some sort of reward for that particular service. It’s not just nurses, it is all the persons who had to be out there in the midst of this pandemic. So yeah, but not necessarily for nurses alone, for everybody.”

Boucher, however, said he was not sure that the honorarium “has to do with the reward for them toiling.

“I’m of the view that that is a reward for their decision not to participate in the strike action that was called.”

He noted that nurses had decided, over several meetings, to withdraw their services in September.

“And it is a prime minister who went, when the nurses took the decision, and begged them not to — pleading all kinds of love and all that sorts of stuff — and when many of the nurses heeded his call, which is quite interesting, because it is as if he had a gun pointed at them. And they reacted by saying, ‘Stop, we’re gonna do this.’

“And then when you reach out to them, for whatever reason, many of them change their minds. And they decided they were not going to strike. In other words, he broke what would have been a very effective strike by the healthcare workers by his appeal.”

Boucher said he remembered that Gonsalves spoke on a radio programme after the strike saying that he would recognise the nurses for their dedication.

He further noted that Lanceford Weekes — a retired union leader and activist for the government, who is a host of the radio programme, had told the prime minister that he (Weekes) was negotiating on behalf of the nurse.

“And to me, that is money that is tantamount to Judas betraying Christ. But that’s why we are here today,” he said of the fact that public sector unions have brought a legal challenge against the government’s vaccine mandate.

“Because I firmly believe if nurses — there are two groups of workers that I realise have a lot of power: nurses and teachers. When they shut down, everything shuts down. And if the nurses had stood their ground, we might not have been here engaging our lawyers — very expensive work — and fighting to get back the  work of all of those workers. We would not have been here. I am  very confident of that.”

Speaking at the same press conference, Oswald Robinson, president of the SVG Teachers’ Union, said that he agreed with Boucher.

“This government is on record of the divide and rule strategy. They have done it in 2015. They actually rewarded persons who did not participate in the one-day strike and they feel that is working for them. And that is why we said to our workers, you have to be focused, you have to stay with the organisations who have the voice to speak for you. Whatever comes your way you take it but don’t see it as a bribe.”

Robinson said that people are being rewarded for not supporting their union or the Police Welfare Association.

“That is clear. It is staring us in the face there. In fact, the government had not given retroactive payment for many years for persons who finished university and Teachers’ College. And when we’re planning that recent protest action, all of a sudden, a whole set of our teachers got retroactive payment. It is the quickest in the history of this country that teachers who finished teachers’ college got their appointments.

“So they’re using this divide and rule to more or less diffuse our action, to weaken what we’re doing. So we said to our workers, take whatever is yours, it’s your money, should be yours, but do not do it at the expense of betrayal.”

Robinson said that the prime minister’s back is against the wall and his government “is scraping the bottom of the barrel, the lowest part of the barrel.

“And they cannot put up the kind of fight that they ought to in this time. And so they are doing all sorts of things, monies have been shared away, you have retired teachers going back into the primary school to teach, among those who are untrained and going back to teach.

“So we want everybody to understand that we know these things are happening and he will do anything else because a drowning man would catch at a straw. But let us stay united, let us stay focused. We’re fighting against mandatory vaccination, that is the issue. And once we stay together, we would send that clear message to him that enough is enough.”

He noted that the union’s legal counsel were at the press conference and that the legal challenge had been filed.

“But we are also fighting it at other angles — protests,” he said, adding that the Caribbean Union of Teachers has written to the government but was yet to get a response.

“So yes, teachers deserve benefits, too, but you see the state owed even principals. they have robbed $90 since 2010, and government has not paid up,” Robinson said.

2 replies on “Unions want bonus for all public sector workers”