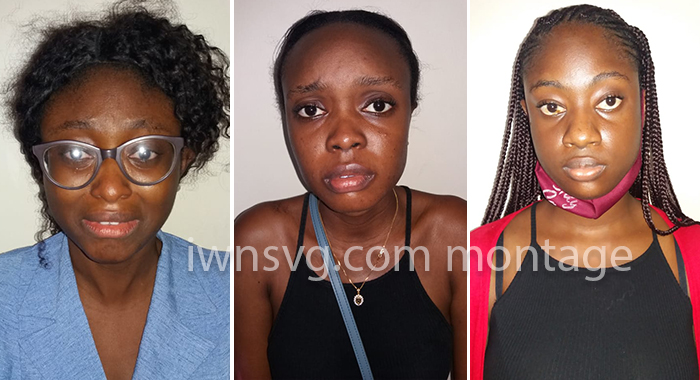 Three Nigerian medical students were today (Tuesday) bonded for one year in the sum of EC$1,000 or three months in prison for stealing EC$910.10 in groceries from Massy Supermarket.

Senior Magistrate Rickie Burnett handed down the sentence at the Kingstown Magistrate’s Court, six days after remanding the students to prison for their crime.

The time on remand meant that Nafisa Nayhaya, 19, Ruth Omachi, 23, and Simisola Babatunde, 25, of Belair and Nigeria, spent the Christmas holidays in prison.

The facts of the case, as presented by prosecutor Corporal of Police Corlene Samuel, are that at about 11 a.m. on Dec. 21, a loss prevention officer on duty at the supermarket received certain information about the defendants.

As a result, the loss prevention officer warned the trio not to put items into their shopping bags before paying for them.

The trio then went to the check-out counter and paid for some of the items but not those in the shopping bags.

They were intercepted at the exit doors and an examination of their receipts showed that they had not paid for items amounting to EC$910.10.

The police were summoned and the women, under caution, admitted to the offence. They were then formally charged.

In mitigation, counsel Grant Connell told the court that Nayhaya came to SVG last January, is a virgin to the law, has no previous convictions, expresses extreme remorse and pleaded guilty at first opportunity. He said she was the one pushing the trolley.

Omachi came to SVG in January 2020, is a second-year medical student, had no previous conviction, was extremely remorseful for her action, pleaded guilty at the first opportunity and was the one who orchestrated the crime.

Babatunde, who also arrived in SVG in January 2020, is also a second-year medical student, has no previous conviction, was extremely remorseful, and pleaded guilty at the first opportunity, the lawyer said.

The lawyer told the court that there are aggravating features of the case, including his clients’ attempts to conceal their actions.

Mitigating, he said, was the fact that the items were returned.

He said there were no aggravating features of the defendants, adding that they are of good character, showed genuine remorse, and are very young.

“We are all mere mortals,” Connell was saying when the magistrate said that most aggravating in the case was the fact that before the act was completed, the women were warned not to put the items in their shopping bags.

However, Connell said that the factual matrix that the prosecution presented to the court is something at variance with counsel’s instructions.

The lawyer noted that the defendants had spent six days in prison.

The magistrate emphasised the fact that the defendants are medical students.

“And they are Nigerians,” Connell added.

“The best of Nigerian students,” Burnett retorted, further highlighting the fact that the defendants are medical students.

The lawyer said that the six “horrifying days” that his clients spent in prison were “far beyond those who have come before the count and have not even blessed the doors”.

Connell, however, said that he understood the thinking of the court — that the defendants must be made to understand that what they did was wrong.

“They understand,” he said, adding that the stolen items were recovered and are all in a condition that they could be accepted by the supermarket.

“They have every mitigating factor in their favour,” the lawyer said and asked the court not to impose a custodial sentence, saying doing so would be “harsh and unconscionable”.

The magistrate, however, reiterated, as he had done at the beginning of the sentencing, that he was not going to send the women back to prison.

Connell again restated that the women had spent six days in prison and during that time had been assigned plastic wares for their meals.

Burnett said that the six days on remand were “time for reflection”.

Connell said it was unfortunate that others who have come before the court “have never blessed that blessed institution”.

“I could see your thinking when they went on remand,” he said, adding that his clients were seeking the mercy of the court.

“There will be ramifications of their actions, including the criminal record and how they are treated by the institutions. We are humbly asking to give them a chance. I think they have suffered enough and I don’t think their suffering is over.”

The magistrate, however, denied the application.

Meanwhile, in her comments on sentencing, the prosecutor said that the aggravating factors outweighed the mitigating features of the case.

“They are remorseful, you could see it before the court today,” she said, referring to the defendants who cried extensively from the time they arrived in court and during the sentencing.

Samuel asked that the sentence reflect the seriousness of the offence but said that the Crown was not looking for a prison term.

At this point, Connell added that another fact in the case is that the defendants, when apprehended, expressed, then and there, their remorse and apologised.

“It’s been some time since I have seen such remorse,” he said.

The magistrate, in handing down his sentence, said he found the defendants’ conduct to be baffling.

“What I can’t understand is medical students thinking like this,” Burnett said and handed down the sentence.