The realities of climate change 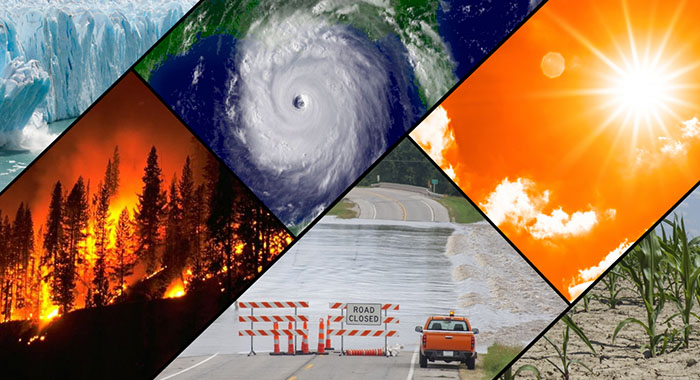 Climate change refers to significant changes in global temperature, precipitation, wind patterns, and other measures of climate over several decades or longer. Humans are the main perpetrator why climate change is accelerating. As the human population increases, more vehicles would be on the road, electrical appliances being increased in homes, schools and offices, more garbage being sent to the landfills , deforestation, etc. These activities would contribute to climate change.

Climate change is accelerated when there is an increase of greenhouse gases such as carbon dioxide, nitrous oxide, methane, sulphur dioxide that warms the earth. The ocean absorbs more than 90% of the heat trapped on earth from increased greenhouse gases. Warmer waters can make some fisheries smaller by putting metabolic stress on fish, making it harder for them to reproduce or find food. It can also cause zooplankton, essential fish food, to decline. It also threatens to cause mass migration of marine species in search of the right conditions for feeding and spawning. This would have a negative impact on fisher folks because it would cost them more gasoline to go further out to sea.

The largest reef in the world, the Great Barrier Reef experience one of the worst bleaching in 2016. Coral bleaching refers to the process in which a coral colony loses zooxanthellae, the microscopic algae, when under some form of environmental stress. As zooxanthellae is expelled, the coral colony appears white, hence the term “bleached”. Ocean acidification also occurs as a result of an increase in carbon dioxide in the ocean. The more acidic the ocean is, it is harmful to sea creatures like oysters, corals, plankton, and shellfish that grow hard shells made of a chalky mineral called calcium carbonate. If ocean water becomes too acidic, it can begin dissolving those shells.

Warmer oceans would cause stronger storms and hurricanes. As the hurricanes or storms travel across warm oceans, they pull in more water vapour and heat. This means stronger wind, heavier rainfall and more flooding when the storm or hurricane hits land. According to a CNN news article, the article states that hurricane Irma is the strongest Atlantic basin hurricane ever recorded outside the Gulf of Mexico and the Caribbean Sea. It lasted as a hurricane from Aug. 31 until Sept. 11. The article further states it stretched 650 miles from east to west, affected at least nine US states, turning streets into rivers, ripping down power lines, uprooting trees and cutting off coastal communities.

Ice Glaciers are melting at an alarming rate as global temperatures gets higher. This would cause sea level rise to occur. The world is at 1.2℃ warmer than it was in the 19th century and it must not pass 1.5℃. However, the planet could warm by more than 2℃ by the end of this century if nothing is done urgently. Are countries going to allow climate change to get worse and not reduce their carbon foot print?

Here are some tips for reducing and adapting to climate change:

Every year world leaders gather at COP26 to discuss their plans for reducing climate change. The leaders always talk the talk but they don’t walk the walk. Countries are staring down the barrel of a gun with climate change. To remove this gun, it is going to require “all hands on deck”. Politicians globally would have to put policies in place to alleviate their carbon foot print and the citizens of each country would have to execute these policies. If this does not happen soon and climate change gets worse it would be a catastrophe on planet earth.