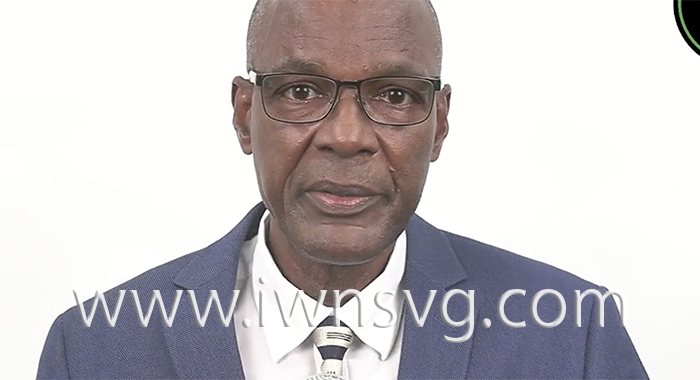 Opposition MP Daniel Cummings says there were no temperature checks and sanitisation at the Parliament Building — as the latest protocols mandate — on Tuesday, a day on which two MPs tested positive for COVID-19.

“It just was noticeable on my entering the Parliament this morning that there was no such mechanism for even checking temperature,” Cummings said.

He noted that this is mandated by the protocols that Chief Medical Officer, Dr. Simone Keizer-Beache has handed down for the House of Assembly.

“So I raised this point to show how inconsistent the house has been in implementing the protocols,” Cummings, who is MP for West Kingstown, told a press conference of the New Democratic Party, of which he is chairman.

Opposition Leader Godwin Friday announced that his team will stay away from Parliament until he receives advice from the CMO, in light of the two positive tests on Tuesday.

When Urban Development Minister, Senator Julian Francis tested positive for COVID-19, it brought to four the number of government lawmakers to be diagnosed with the viral illness since the weekend.

Cummings noted that the government has been adamant that MPs who are not vaccinated against COVID-19 or have not disclosed their vaccination status must speak from behind a plexiglass booth, even if they are raising a point of order.

“They have held steadfastly to that and the speaker has been unequivocal on this one. She has condemned any opposition member who doesn’t meet the requirement, who attempted to speak and silence them almost immediately,” he said.

He said that those protocols are being administered “in the most ruthless manner”.

Under the protocols, only a certain number of lawmakers on each side are allowed in the assembly chamber at any one time.

Cummings said he watched the finance minister’s address Monday night “and it is very evident that very early in the proceedings he was not comfortable.

“He was drinking water very frequently, his voice was not as usual, you can see it quite clearly that he was not on hundred per cent”.

The NDP chairman, who is also the party’s spokesperson on health matters, said that “given the now public exposure of so many members of cabinet having met, on the Palm Island, on the weekend in a social environment, with pictures all over Facebook of many of them not wearing masks, one would expect that they would have been cautious and making sure that they are not in a position to pass whatever infection they may have collected on to members of the Parliament and other persons who operate in the Parliament”.

The prime minister has said the debate will resume today (Wednesday), and Cummings asked Friday whether this was necessary, given that the Estimates were approved in December, and therefore, the government can spend money.

In response, the opposition leader said that over the past few years, the estimates were presented in late January and the Budget in February.

“So the timeframe and so forth for getting this done, would seem to be still very much on, that we can have a prudent postponement until the matter of the safety and availability of members can be addressed and be assured that that would happen.”

He said the notion that somehow the budget has to be passed immediately “is quite a hasty situation that I am hoping and expecting, quite frankly, that the chief medical officer will have an input in it today”.

The opposition leader said that everyone must all take COVID-19 seriously.

“We must all do what we can to protect one another from infection and illness, and worse.”

He urge the public to continue to wear facemark properly in public and to sanitise and so forth.

“And what we haven’t heard much of taking place, in fact, and today demonstrated is that the importance of testing, regular testing for persons who feel that they might have been exposed to come to have a test. Why not test them?”

Friday said there is a notion that somehow one had to demonstrate a certain level of “closeness or symptoms” and so forth before one can be tested.

He said that to him, that is running unnecessary risk, with the Omicron variant, which is highly infectious.

“So, my dear people, I want you to continue to take this matter seriously. You see how quickly that it can change circumstances, someone becoming infected, even if you don’t become ill or seriously ill, it is very disruptive to your life and your ability to work and so forth,” the opposition leader said.

“And it’s not something that we want to see people taking chances that are unnecessary, and the same standard that we use for the general public, we will use for ourselves in the house as well. We have one standard and that is public safety. Individual safety comes first.”

Cummings said that to be absolutely clear, anyone testing positive or who had been in contact with a positive person requires some form of isolation of between five and seven days with testing before and at the end of the period.

“In the case of the cabinet of St. Vincent and the Grenadines, most of them, apparently, were on that island in the Grenadines on the weekend. I don’t know if they met in caucus thereafter.”

He speculated that all members of the Cabinet had been exposed to COVID-19.

“And it is incumbent on them as a government to demonstrate to the population at large that they are serious about COVID. And as a minimum, they should not expose others who are not infected or any members of the opposition, and they should stay away from Parliament for at least five to seven days. And we look forward to them acting judiciously if they want to act as a government and not to pretend otherwise,” the NDP chairman said.