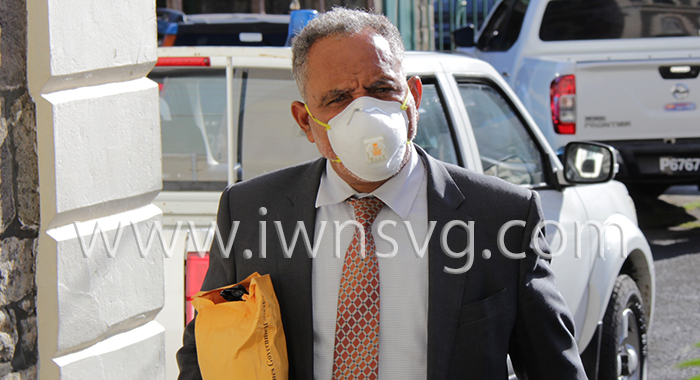 Opposition Leader Godwin Friday and Chief Medical Officer, Dr. Simone Keizer-Beache are expected to discuss on Jan. 31 the COVID-19 protocols she has approved for Parliament.

The two were slated to meet this past Monday, but the talks were postponed as the Budget Debate was pushed back a week, from Jan. 3.

Friday told a New Democratic Party press conference in Kingstown on Tuesday that the new date is the scheduling requirement of the CMO.

“Obviously, I would like to have that meeting as soon as possible.”

The CMO has approved protocols mandating that unvaccinated lawmakers or those who have not disclosed their vaccination status speak from behind a booth and to wear a face mask while doing so.

Some opposition lawmakers are affected by this protocol as they have not disclosed their vaccination status.

Vaccinated MPs can speak from their sitting position without a facemark.

Friday said that one of the things he had requested on behalf of opposition lawmakers was for all MPs to be allowed to have a plexiglass shield around their sitting position so that they could speak from that position and do so as safely as possible.

He was speaking on a day when Minister of Finance Camillo Gonsalves and Minister of Urban Development Julian Francis tested positive for COVID-19.

They join Minister of Agriculture, Saboto Caesar and Education, Curtis King who tested positive on the weekend.

Friday noted that currently, there is one plexiglass booth located towards the end of the large assembly chamber.

“… and it’s just simply impractical for members to be running up and down to use that even if they feel unsafe to speak from where their seat is.”

He said that his request for a plexiglass booth around each sitting position was rejected.

“… the speaker informed me that she had been informed that it would create a weight consideration that would not be safe to have that many of those plexiglass shields in the House of Assembly “.

Friday, however, said that while that decision had been made, “… in light of what transpired today (Tuesday), the notion of returning to Parliament and simply conducting business without the input of the chief medical officer is simply not on”.

He said that opposition lawmakers would not return to Parliament until they were advised by the CMO.

Speaking at the same press conference, NDP Chairman, Daniel Cummings said it is common, as is the case in Trinidad and Tobago, where he spent almost a year until recently, to have each seating position fitted with a plexiglass shield.

“That is a common sense approach. To separate people into vaccinated and unvaccinated categories for the purpose of speaking is using rather foolish spittle.”

Cummings said that he had raised with the speaker the possibility of having lawmakers located in multiple buildings during the meetings of Parliament, in light of the physical distancing requirements.

“And we’ll be able to participate live from an attached facility, they have poured cold water on every recommendation we put including the possibility of having more shields so that everybody can speak to the shield,” the NDP chairman said.

“But it’s clear to the world to see that this is a government that says to the population do as I say, not as I do. In other words, the rules are appropriate for one set, but if it comes home to them, it must not apply.”

One reply on “Opposition Leader, CMO to meet month end”