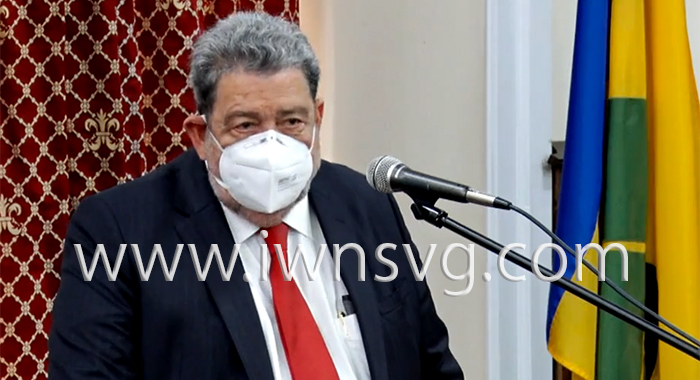 Prime Minister Ralph Gonsalves’ comments on Monday that he would summon his COVID-19-infected MPs to Parliament to ensure that the Budget is passed “sends the wrong message” about how seriously his government takes isolation of people infected with the illness.

“And it has done considerable harm, in my view, to the perception as to how seriously this government takes the public health concerns of COVID,” Opposition Leader Godwin Friday told a press conference held by his New Democratic Party on Tuesday.

“At the risk of infection, I certainly would not be attending the Parliament when if any member who is tested positive is allowed to attend the chamber. And none of the members of the opposition would attend.”

The opposition leader said that House of Assembly staff members would have the right to refuse to be there in the chamber “if they thought that a member who was positive was being allowed to enter and to continue to do business within the chamber”.

The party called the press conference after its legislator left Parliament following the COVID-19 positive results of Minister of Finance, Camillo Gonsalves, Tuesday morning, less than 12 hours after he delivered a five-hour Budget Address.

The opposition leader noted that on Monday, prior to the delivery of the budget address by the finance minister, the prime minister asked the opposition to agree to have voting by telephone for MPs who might be absent from the house when the vote was taking place.

Friday did not agree that this should be done. “I felt that in the circumstances, the rules did not permit for voting by telephone: the standing orders 44 says that the voting is done by members who are present in the house.”

Friday noted that the prime minister then said that he would do what he has to do and suggested that government MPs who are COVID-19 positive might be allowed to vote in person in the Parliament.

“To me, that is irresponsible talk. It sends a very bad message that there’s one rule for everybody else and one for the government as it suits their convenience, their circumstances. It cannot be permitted.

“This is a government that sent teachers and public servants home, refused them entry to their workplaces because they were unvaccinated, even though they had not tested positive for COVID.”

Friday said that the suggestion that because the government had businesses it wanted to conclude that members who had tested positive might be able to attend to vote “is a very damaging position to adopt.

“It sends the wrong message to the members of the public about how seriously the government takes the public health concerns of COVID into account.”

He said there are employers who may have “exigent circumstances, serious matters” to which they would like an employee who happens to be COVID-19 positive to attend.

“You’re going to say, ‘Well, boy, you’re only going to be here for half an hour, come in and fix this thing for me and then you could go back home, because I need it done urgently’?”

He said that the protocol is that COVID-19 patients stay in isolation until the medical officers issue the clearance.

“It’s not just a matter of what is convenient, or what is required by your own personal circumstances. So that is something that, unfortunately, sends the wrong message to the people of this country.

“And it has done considerable harm, in my view, to the perception as to how seriously this government takes the public health concerns of COVID and the risk of infection.”

The opposition leader said there was no indication that any consideration had been done regarding the prime minister suggesting that COVID-19 positive MPs attend Parliament.

“… normally with the changing of the protocols — because that is essentially what that would amount to — those notices would be sent by the office of the speaker, or the clerk.”

Friday said they were sent by email and opposition lawmakers received no notice indicating that the CMO had approved the participation of COVID-19 positive MPs in the debate.

He noted that the protocols once said that unvaccinated MPs or those who had not declared their status had to wear a black mask when speaking in Parliament.

“So, having members who have tested positive continue to be in the house that would, in effect, require an amendment of the protocols. And we received none, from the speaker, and certainly not any indication that the chief medical officer had any input in that,” Friday said.