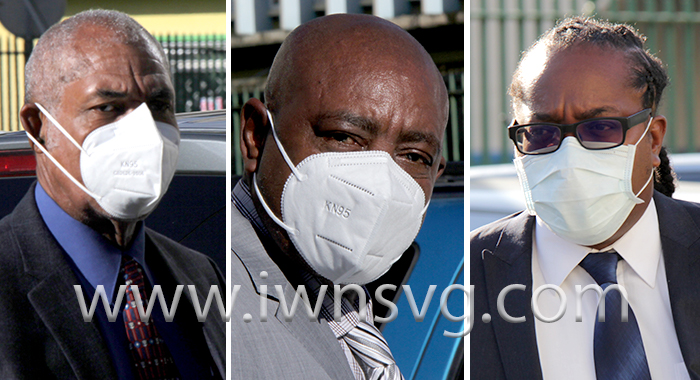 Half of the 14 government lawmakers in St. Vincent and the Grenadines have now tested positive for COVID-19, with three more positive results today (Wednesday).

On Wednesday, Deputy Prime Minister, Montgomery Daniel, who had recovered from “a digestion issue” that kept him at home the previous day, returned a positive COVID-19 test ahead of the day’s parliamentary proceedings.

Minister of the Public Service, Frederick Stephenson, who had knocked wood on Tuesday as two positive results were announced, also tested positive on Wednesday.

The third COVID case was confirmed in Senator Rochard Ballah, a parliamentary secretary in the Office of the Prime Minister, with responsibility for information.

The new protocols see unvaccinated lawmakers or those who have not disclosed their vaccination status barred from the chamber and ordered to quarantine for five days, if they were present when the finance minister delivered the Budget Address.

The protocols mandate no such quarantine for vaccinated lawmakers.

New Democratic Party spokesperson, Laverne King, confirmed to iWitness News that Southern Grenadines and East Kingstown MPs, Terrance Ollivierre and  Fitzgerald Bramble as well as opposition senator, Shevern John, were asked to leave the Parliament, on Wednesday, as they were present when the finance minister spoke.

The prime minister has said that all government lawmakers are vaccinated against COVID-19. Some opposition lawmakers have not disclosed their vaccination status.

On Monday, Prime Minister Ralph Gonsalves appeared to hint that there could be more positive cases among lawmakers following  positive tests in Minister of Agriculture Saboto Caesar and Education Minister Curtis King on the weekend.

He suggested that lawmakers be allowed to vote virtually, a proposal that Opposition Leader Godwin Friday rejected as premature and contrary to the rules.

“It’s my duty to report that this morning there are three other members of the government side who have tested positive with COVID-19.”

The prime minister named the positive cases, adding, “It means, therefore, of the 14 members on the government side — the nine representatives, the Honourable Attorney General, and the four senators — that there are seven who are here. I know we are not taking any issue in relation to quorum.”

He returned to his comments from two days earlier, saying, “… immediately prior to the Honourable Minister of Finance delivering his Budget Address, I had a foreboding.

“I have learned over the years as a leader, when a particular factual situation develops, or I see it’s arising on the horizon, I look very far down the road, and I look down the road in relation to our work here in Parliament.”

Gonsalves said it was because of the urgency of passing the budget that he had raised the issue of interpreting “present and voting” — as mentioned in the Constitution and Standing Orders — to be “present, if we have designated places from which you can call in or you can write or you can do it by Zoom so that we can conclude the business of the the house, this urgent business of the Appropriation Bill …”

The prime minister said this was still a matter for consideration, adding that the Parliament is unique in that it is the only institution in the country which passes laws.

He said that while the Cabinet or other entities designated by Parliament can approve regulations, it has to be done within the framework of a parent act passed by Parliament.

Gonsalves said that unlike other public sector workers who can be replaced by another if they are COVID-19 positive, “you can’t replace an elected Member of Parliament, in that fashion — cannot be done on an ad hoc basis.

“So, that if we do not have the numbers in the Parliament, that we have to find a way in which we can be faithful to the law, … by saying that we can vote by some other means.”

The prime minister rejected a proposal by the opposition leader that the debate be postponed for five days so as to allow all lawmakers to take part.

The debate continues with the response of the opposition leader.