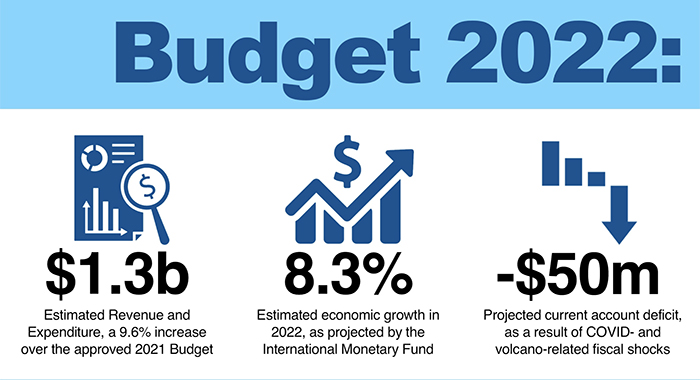 The EC$1.3 billion budget approved in Parliament, on Friday, does not speak “honestly and convincingly” to our people of St. Vincent and the Grenadines, says Opposition Godwin Friday.

He told Parliament that the budget process is “very important not just for grandstanding, but because it affects people’s lives”.

He said that this was also the case with the Estimates, which parliament approved in December, paving the way for the budget.

“… that (the estimates) is the framework, is the architecture upon which the budget is built…

“So if that in itself is rickety and shaky and doesn’t speak honestly to the needs, and the expectations of our people, whatever is constructed upon it will not be productive, will not bear fruit and will be likewise rickety, and shaky, which is where we are now.

“It is painfully familiar to us by now that the budget as presented, it doesn’t level with the people.”

He said that the budget is like one from a minister of finance or government that does not “trust the people in a way that will engage them fully in the process of economic development.

“There is no surprise there. But it doesn’t have to be so.”

Friday said that the presentation of the budget is not for show, though it is, historically, the parliamentary exercise to which people pay most attention.

“They want the budget to mean something; they know something important is happening in the house,” he said, adding that the people urge the opposition to hold the government to account during the exercise.

He said this is why he described as “egregious wrong” the exclusion of three government lawmakers, who were present when Minister of Finance Camillo Gonsalves delivered the budget, one day before testing positive for COVID-19.

The three opposition lawmakers, who are either unvaccinated or have not disclosed their status, were, on Wednesday, ordered to isolate for five days before they might have been exposed to COVID-19 during the minister’s speech.

The opposition leader said that the people ought to be able to rely on the budget as the fiscal package is about them.

“But one gets the impression that in presenting the budget, the minister … saw himself, was like he’s a performer on stage with the people of the country as his audience, seeking approval, seeking their applause rather than engaging them in the process of dealing with their own problems and in our economic development.

“Why should people listen to the budget? Why should they follow it or even when a minister spends more than five hours presenting it and uses language and references that are more suitable for an academic paper to be read by professors and peers than an address that seeks to communicate to our people effectively, and honestly? why should they listen?”

The imposition leader said that the tone and the language, as much as the substance, must be right.

“… More importantly, the government must show that it has a plan that will make things better, it must show that it can see not just problems, but the opportunities, even in a time of crisis, and that it has a plan to take advantage of those that it can see the opportunities and grab them, grasp them, for the people of this country, to use them to make life better for our people.”

Friday said that the budget is not about personal preferences, or personal philosophy or ideology of the minister.

“But you do what is best for the people, meets the needs of the people, of our people, in simple terms.”

The opposition leader said that is why he urged the public to listen to the budget address and debate.

“And if it doesn’t say, ‘Well, no, it does not.’ And find ways to hold the government accountable and bring them back on track.”

He noted that after the budget address, Deputy Prime Minister Montgomery Daniel described it as “a marathon presentation”.

“He didn’t congratulate the minister for ‘a brilliant’ and ‘well-presented’ and ‘useful’ and all of that; he congratulated him for a marathon presentation.

“People shouldn’t be left  after going through all of that, not knowing how it speaks to them and their concerns.”

Friday said he was spending some time on the issue because he wanted people to understand that the budget is “not just for picong (taunting or ridicule); it’s not just for an entertaining speech here and there”.

The opposition leader said that the budget cannot simply be a moment for grandstanding and self praise “that the minister and his government are so good at doing”.

He said that SVG, having gone through so much, more than ever, needs honesty “from particularly those people in government…

“They need that honesty going forward, we must acknowledge that the problems we face that they are serious and we must also grasp the opportunities … as they present themselves.

A critical problem, the opposition leader said, is ‘How do we recover and rebuild?

“But also how do we prosper in the future? What are the things that we can do with our 110,000 people here in this beautiful but small space? To make life better, enjoyable for people?”

He said that young people are looking to get out of SVG and seeking employment in  other OECS nations.

“How are we going to develop our country? How are we going to give hope to people? If we don’t show them how we intend to go forward, to create jobs, and prosperity for them? Can we use this particular time of crisis — COVID and Soufriere being the main ones — to reimagine what we could do and what we could become in our sweet St. Vincent and Grenadines? And I believe we can. But what is clear is that tinkering around the edges that is not an option.”

“Grasping the opportunities now, and looking for ways to do them differently and bigger, in a way that actually transforms lives.”