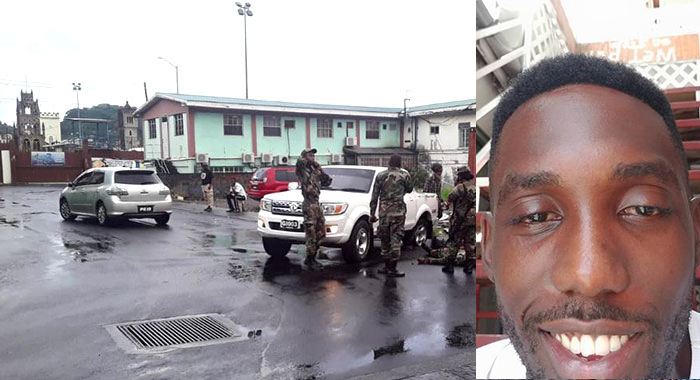 The police officer who was driving a civilian vehicle that slammed into a police pick-up carrying officers in Kingstown last August, resulting in some of the lawmen falling from the truck, has been fined.

On Wednesday, at the Serious Offences Court, Shaka Foster pleaded guilty to a charge that on Aug. 15 at Bentick Square, he drove PE15 without due care and attention.

In presenting the facts, Sergeant Wendell Corridon told the court that it was raining on the date in question.

PE-15, driven by Foster, was travelling from Largo Height to Kingstown along the Nelson Mandela Highway.

There was a vehicle in the area of Randy’s Bakery and when Foster was questioned, he said he had overtaken that vehicle.

On approaching the area of Daddy’s Shop, Foster’s vehicle swerved and slid to the right of the road while G-1005 was travelling in the opposite direction from Kingstown to the Special Service Unit base.

PE-15 slammed into the right rear side of the police vehicle, which was transporting police officers in the pan.

The collision resulted in police officers being thrown from the transport onto the surface of the road.

The vehicle received damage to its rear wheel, the drive shaft broke and the tyres blew out.

The right side of Foster’s vehicle was damaged extensively.

The court was shown two video clips of the accident, each recorded from a different perspective.

In mitigation, counsel Duane Daniel told the court that the facts were, “in a large sum, accurate”.

The lawyer said he could not speak about the injuries sustained in the accident as they might be the subject of a different proceeding, and the information was not disclosed.

He said that Foster was issued a driving permit in February 2019 and it was speeded as a consequence of the accident.

Daniel told the court that his client purchased a vehicle, which was delivered to St. Vincent in January 2021 and was only operating a vehicle for just about six months at the time of the accident.

“That is his effective driving experience,” the lawyer said, noting that the road was wet and put the accident down to inexperience.

Daniel noted that his client had no previous conviction, pleaded guilty, and cooperated with the police.

He said that the charge carries a maximum fine of EC$1,500 and suggested that using the notional starting point of 40%, the court should arrive at a sentence of EC$600.

He said that when the one-third discount is applied for the guilty plea, the court should arrive at a fine of EC$400.

The lawyer noted that his client’s drivers’ licence had been suspended for four months, and asked the court to consider whether the suspension should be adequate in the circumstances.

Daniel said that the aggravating feature of the case, if any, would be the injuries, but added that there was no information before the court in this regard.

He noted the fact that the officers were in the pan of the vehicle, “which is an unwise thing in itself”, adding that there is an advisory from the Traffic Department of the police force that civilians ought not  to ride in the pan of vehicles.

The lawyer said it is possible that were it not for where the officers were riding, no injuries would have been sustained.

Daniel said he could make no qualitative pronouncement on the injuries because no report of medical injury form was before the court.

In his comments on sentencing, Corridon said that the vehicle in which the police officers were travelling belongs to the government and is still awaiting repairs, as the insurer has not settled the matter.

He said that police officers received extensive injuries in the accident and one officer is still having back problems.

“I am asking that the court show Mr. Foster, who is supposed to be a police officer and an exemplary person to the public — giving in my view, Mr. Foster did not even apply the brake; I want the court to show Mr. Foster his carelessness on that day. The sentence should reflect that Mr. Foster fell way below what is expected of him,” Corridon said.

However, Daniel rebutted that Foster was before the court not as a police officer.

In arriving at her sentence, Chief Magistrate Rechanne Browne noted that Foster had pleaded guilty at first instance, his acceptance of liability and admission of his incompetence at the time.

“When the road surface is wet, I drive gingerly. I have over 20 years’ experience as a driver but any false move, sudden application of brakes may not go well.”

She said that sometimes one has to pump rather than hold down the brake and this comes with experience.

Browne told Foster that he does not have to show or prove anything on the road.

She said that the accident was unfortunate and that he must have felt even worse seeing that those affected were his own colleagues.

“It is not that because he is a police officer he is held to a different standard. He is held to the standard of a competent driver,” she said.

The chief magistrate said that suspension of Foster’s driving permit was good punishment, and lifted the suspension.

She gave him until noon to pay an EC$600 fine or spend six weeks in prison.

“Take your time on the road. You are young and young people get something in their head that they need to feel young behind the wheel. Take your time — the road is wet. Always take your time. I don’t play with that.”