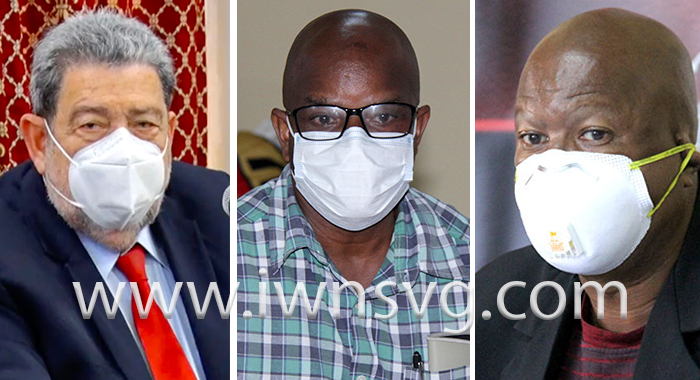 The fact that eight vaccinated government MPs tested positive for COVID-19 in one week does not help make out the case against mandatory vaccination against the illness, Prime Minister Ralph Gonsalves says.

Rather, he said on state radio on Wednesday, the public should focus on the fact that none of the MPs were hospitalised as a result of their COVID-19 infection.

The prime minister made the point as he referred to “a long letter” of “two long pages” that the Public Service Union and the St. Vincent and the Grenadines Teachers’ Union wrote to him and each member of his cabinet on Jan. 17, again outlining their case against mandatory vaccination.

The two unions are suing the government over the vaccine mandate and in the letter, which was signed by PSU head Elroy Boucher, and SVGTU president Oswald Robinson, the unions noted that on Jan. 11 and Jan. 12, Gonsalves suspended the Budget Debate after eight government MPs tested positive for SARS-CoV-2.

The union leaders said that the government has always believed that its vaccination mandate was necessary to create a safe workplace.

Therefore, the purpose of Statutory Rules and Order (SR &O) 2021 No: 28, which brought the vaccine mandate into effect, is cited as “to prevent, control and suppress the risk of the spread of the coronavirus-disease in public bodies,” they said.

The unions further noted that pursuant to Regulation 5 of SR&O 2021 No: 28, the government issued over 200 dismissal letters to public servants who failed or refused to take a COVID-19 vaccine.

Similar letters of dismissal were given to public workers who applied for but were not granted an exemption, the letter said.

“Many of these workers, categorised as front-line workers, had given more than a decade of service to the State. They stand to lose their pension benefits if not vindicated in the courts. They are now unemployed, many without the means to take care of themselves and their families.”

Boucher and Robinson went on to say that the government’s predicament in Parliament on Jan. 11 and 12 “exposes the illogicality, irrational and disproportionate nature of the mandatory vaccination policy.

“It has been known that none of the vaccines prevents anyone from contracting or transmitting SARS-CoV-2. Yet, the Government went ahead with its policy.

“The PSU and the SVGTU maintain that any vaccine programme established in St. Vincent and the Grenadines ought to be voluntary. Each Vincentian must exercise their right to bodily autonomy and integrity and exercise the right to choose based on informed consent regarding any medical treatment or procedure.

“We again unequivocally declare that we are very concerned about the continued health and safety of all workers and their families.”

“Despite the facts, healthy public servants who posed no threat to their co-workers or contributed to an unsafe workplace were dismissed from their jobs. This action, in our view, represents a historical wrong against public servants by your Government. Prime Minister, we urge you and your Cabinet to right this historic wrong by repealing SR&O 2021 No:28 and reinstating all dismissed public servants with their benefits intact.”

The union quoted Gonsalves as saying in his 2005 Budget Address that he would always remember public sector workers’ “voluntary self-sacrifice in the difficult weeks and months following the terrorist events in the USA on September 11, 2001, which affected our country’s economy so terribly”.

He said that workers’ decision to accept voluntarily a partial wage freeze for one year “bonded me and my government to them more than they would ever know.

“To be sure, from time to time, there will be hiccups in our relationship and difficulties may sometimes arise. But the bedrock foundation cannot be shaken.

“I know that their employment situation is not always easy but life has never been universally easy. Still, this government has tried to do its best by you, the public servants, and we appreciate your efforts”.

“We share the same belief that “from time to time, there will be hiccups in our relationship and difficulties may sometimes arise, but the bedrock foundation cannot be shaken”. In this vein, Prime Minister, we urge you to convene an urgent meeting with our unions and the Police Welfare Association to address and resolve all of the issues arising from the government’s decision to institute and enforce SR&O 2021 No:28.”

PM not listen to union leaders ‘about epidemiology’

He speculated that the government MPs who tested positive for COVID-19 were infected with the Omicron variant.

He said that his MPs recovered quickly and “with no hospitalisation, nothing untoward. But if they didn’t have the vaccine, would have been a different story.”

The prime minister went on to speak about the letter from the public sector union, saying that he had not responded to it as yet.

He accused the unions of using “Jomo language”, a reference to their lawyer, Jomo Thomas, a former senator and speaker of the House of Assembly under Gonsalves’ government.

“They write me and tell me I must repeal the regulation and take back (re-employ) everybody. I thought that is what they seeking in the court. But they want short circuit and ask me to do it because of the basis of this.

“But they don’t understand. It is precisely because those brethren took the vaccine why are they able to withstand this problem, this real health problem which we face and it ain’t carry them down the hospital.”

He said that Dr. Anthony Fauci, chief medical advisor to the US president, and Dr. Charles Witty, chief medical officer in the United Kingdom as well as the head of the Caribbean Public Health Agency  make that point

“On the contrary, the fact that these guys got COVID is not the matter, which is the issue on which to comment is the fact they got hit with an easily transmissible variant and that they were not a burden on top of the health services and to themselves.”

He said that the fact that unions had sent the letters to all the cabinet ministers was a “kind of overkill.