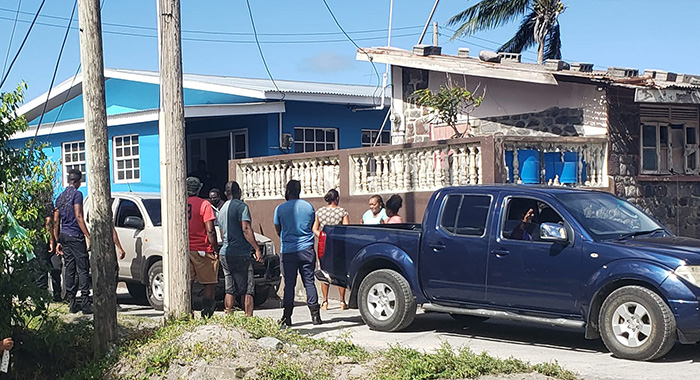 Police and onlookers at near the Owia Clinic on Sunday. (Photo: Rochelle Baptiste/Facebook)

Five female health workers — three professionals and two ancillary workers — were, up to Sunday, in police custody in connection with the discovery of 54 kilograms of cocaine at the Owia Clinic.

The quantity of cocaine was found on Saturday evening, hours after police began an operation that netted three kilograms of the Category A drug at a home in the North Windward village.

iWitness News understands that police conducted an extensive search of the clinic Saturday evening, which initially turned up nothing illegal.

The officers left then returned shortly after and extended their search to the roof of the facility, which was recently renovated.

A reliable source tells iWitness News that the cocaine was found in a barrel in a locked room at the clinic.

The three kilograms of cocaine recovered at the home in the village was found in a suitcase, and one resident of that home, a man, was taken into custody.

Another man was taken into custody Sunday afternoon, as police investigated reports that a vehicle that he usually drives was seen near the clinic sometime ago, around the time when police suspect that the drugs might have been stashed there.

The drugs were discovered during a joint operation conducted by the Narcotics Unit and the Rapid Response and Special Patrol Units, two tactical outfits.

iWitness News understands that police are acting on intelligence that there is “a lot of cocaine in the Owia area”.

Sources have told iWitness News that the police operation is believed to be part of a wider investigation that began after the arrival of a speedboat in Baleine, an uninhabited area in the north of the country, renowned for marijuana and produce cultivation as well as illicit activity.

12 replies on “54 kilos of cocaine found at Owia clinic; 5 health workers in custody”