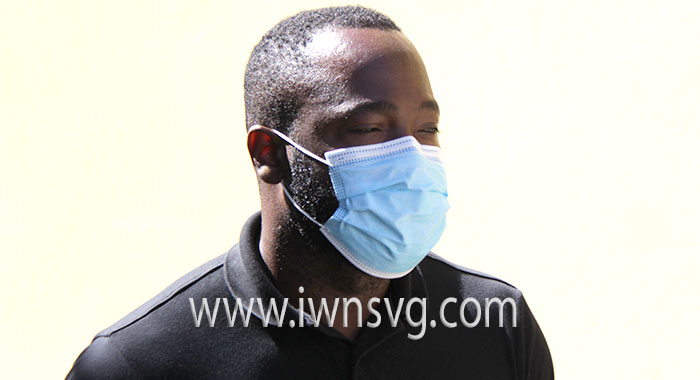 Brently Butler leaves the Serious Offences Court on Friday, Jan. 21, 2022 after the charge against him was dismissed.

One of the three Vincentian soldiers in the British Army charged in St. Vincent with firearm and attempted murder offences was freed on Friday after the man at whom he is alleged to have discharged the firearm did not attend the trial.

Brently Butler, of Chester Cottage and England, was freed at the Serious Offences Court of a charge that on Dec. 24, at Mt. Young, he unlawfully discharged a firearm at Emi Balcombe, of Langley Park.

Balcombe, a 17-year-old labourer of Langley Park, did not attend the hearing and Butler’s lawyer, Duane Daniel, told the court that his application was “obvious”.

After Station Sergeant of Police Julian Cain and the investigator, Police Constable 764 John testified, the prosecutor, Crown Counsel Rose-Ann Richardson told the court that that was as far as the Crown could go at that point.

She told the court that the virtual complainant was absent and she was told that his phone was not on.

Richardson said that the virtual complainant had been informed of the court date and knew that he was supposed to be present.

In response, Chief Magistrate  Rechanne Browne said that since the virtual complainant was informed and he was not there, “we are not going to wait for him. He has no interest.”

The prosecutor told the court that there was another witness in addition to the complainant but the Crown did not intend to call that witness to testify.

Daniel said that his application was obvious, which is to have the matter dismissed.

“And I will do so, because he was served to be here. So what will we do, just wait on him? Dismissed,” the chief magistrate said.

Earlier, in his evidence, Cain told the court that on Jan. 10, PC 764 John, who is attached to Georgetown Police Station, came to him asking for his expert opinion on how a barrel-operated weapon functions in terms of discharging live rounds of ammunition.

“When a barrel operated weapon discharges a live round of ammunition, that spent cartridge does not project from the firearm. That cartridge must be manually removed and replaced when a live round is needed,” Caine told the court.

He said he is aware that colloquially, a barrel-operated firearm is called a “spin barrel”.

During cross examination, Cain told the court that John did not present a firearm to him but only asked for his opinion.

John then took the stand and said in his evidence in chief that on Dec. 24, about  10:08 a.m., he was on duty at the Georgetown Police Station when Eli Balcombe made a report that an unknown-named man had discharged a firearm at him.

The complainant was accompanied by a witness, Arton Patterson.

John said he went to the scene — the public road in Mt Young — shortly after 10 a.m.

On arrival at the scene, the complainant pointed out to the officer an area in the public road.

“It is a flat, smooth, pitched road about 21 feet wide; no obstacle along the roadside to hinder sight,” John told the court.

He said that the complainant pointed out a distance of 20 feet between him and the shooter.

“Which is, basically, close range,” the officer told the court.

“I thoroughly examined the scene in search of spent shells. However, none was found. From my knowledge of this said area, it’s an area where people hardly walk. It’s basically a lonely area and from where the incident happened, the Mt Young gas station is about 600 feet away.”

John told the court that when he returned to the station, he recorded a written statement from Balcombe, as well as the witness.

He said that Balcombe gave him certain information in respect of the defendant, who goes by the name “Cedu”.

With that information, on Dec. 29, about 11:15 a.m., John and other police officers carried out investigations in Chester Cottage.

“I met the defendant in the area of the bus shed at Chester. He was in the presence of Keri Phillips. I informed the defendant of the report which I was investigating, in which he was also a suspect.

“I ascertained his correct name to be Brently Butler, of Chester Cottage. I then took the defendant into custody. Keri Phillips was also taken into custody. Immediately after, I executed a search warrant at the home and premises of Brently Butler in search of guns and ammunition.”

John said no guns or ammunition were found. However, one Calvin Klein hoodie was kept as an exhibit.

He said that Butler and Phillips were taken to Georgetown Police Station, where the hoodie was fitted with an identification tag.

The hoodie was later shown to Balcombe and Patterson, but neither of them identified it.

John said he conducted further investigations and on Dec. 30, 2021 about 15:15 p.m., conducted an identification parade at the Criminal Investigation Department in Kingstown, involving Phillips.

“Initially, the VC identified the defendant and said that there was a second person,” John was saying when Daniel rose and objected.

The lawyer said that the prosecution must train its witnesses better.

“When they come to court, it is a professional responsibility. This is not a civilian witness. They have to know what they can say and what they can’t,” the defence lawyer said.

At this point, Richardson reminded John that the matter before the court involved Butler.

John told the court that on Dec. 31, about 12 noon, he cautioned and interviewed Butler in the presence of Corporal Stay, but the defendant chose not to be electronically interviewed.

John subsequently arrested Butler and charged him with the offence of unlawful discharge of a firearm and served him with a copy of the charge sheet.

The officer told the court that he conducted further investigations and on Jan. 5, about 7:30 a.m., he recorded a witness station from Brenton Antoine, of Bay Road, Georgetown.

During cross examination by Counsel Daniel, John said that the hoodie was not tendered in evidence because Balcombe had not identified it.

He said that the hoodie was recovered from a suitcase but he could not say the suitcase was “packed”, though it was not empty.

The officer said that from his recollection, there were no tags on the hoodie

The lawyer put it to the officer that the hoodie was brand new and still had all the tags attached.

“From the look of the hoodie, it didn’t look brand new.”

The officer said that the clothes in the suitcase did not look new to him.

John said that he had heard the name “JB” during the course of his investigation.

He said he did not know a “Bingo” Ronique Burke, nor could he say he knows an Ethan Burke who goes by the name “JB”.

It was at this point that the matter of the complainant arose and the case was dismissed.

Meanwhile, Keithron Mills, another of the soldiers, is expected to know his fate this Friday in connection with a charge that on Jan. 2, at Georgetown, he had in his possession a .45 pistol, serial number AOC52189, without a licence issued under the Firearms Act.

Mills, who Daniel also represents, was tried at the Serious Offences Court on Thursday and the chief magistrate reserved her judgment until Friday.

And, Keri Phillips is awaiting a preliminary inquiry into a charge that on Dec. 26, 2021, with intent to commit the offence of murder on Istah Mack, of Chester Cottage, he did an act which was more than merely preparatory to the commission of the offence.

All three men have been granted bail.

The court has ordered each of the accused men to surrender his travel documents, and to seek the permission of the court to leave the state.

The court has also ordered that stop notices be placed at ports of entry and exit, preventing the accused men from leaving the country without permission.

One reply on “Vincy UK soldier freed after complainant no-show”