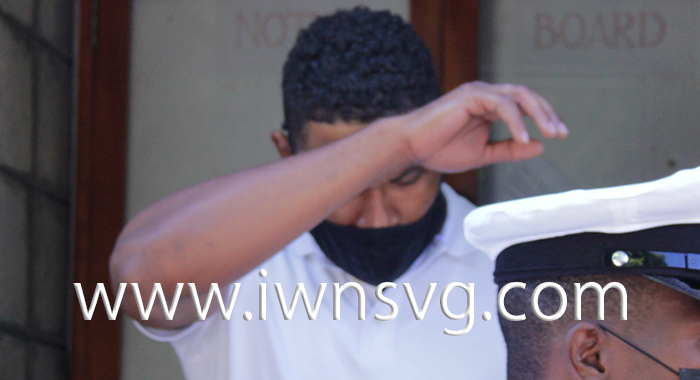 Keithron Mills hides his face as he leaves the Serious Offences Court on Friday, Jan. 28, 2022 on his way to prison for possession of an unlicensed firearm.

Private Keithron Mills, 29, of Chester Cottage and England, might remember “AOC52189” for a very long time.

It is the serial number of the .45 pistol that he had in his possession without a licence on Jan. 2, 2021, an offence that will end his career as a soldier in the British Army — two years after it began.

On Friday, at the Serious offences Court, Chief Magistrate Rechanne Browne found Mills guilty of possession of the firearm without a licence under the Firearms Act.

Mills was intercepted with the firearm when police, acting on information stopped the vehicle outside the Georgetown Police Station.

Mills was the only occupant in the vehicle, and officers found the firearm under the driver’s seat.

At his Jan. 20 trial, which was expedited because of his employment status, Mills opted not to testify in his own defence or to call any witnesses after the court rejected a no case submission by his lawyer, Duane Daniel.

And, on Friday, the chief magistrate ruled that the Station Sergeant of Police Renrick Cato had discharged the prosecution’s burden to prove the Crown’s case beyond reasonable doubt.

In mitigation, Daniel told the court that his client is a private in the British Army, with just over two years’ service.

He said that Mills is the father of a 5-year-old child, whom he supports, and has another child on the way.

“That’s always the case,” the chief magistrate commented, referring to the number of defendants who appear before her court, claiming to be expecting children.

Daniel said that Mills has distinguished himself as an officer abroad. The lawyer said he had a statement from Major Terry Williams, officer in command of Bradley Company, 1st Battalion the American Regiment of the British Army.

The lawyer further said that the army had lent support by sending Chief Petty Officer Dean Goodey to the court.

Goodey, who was dressed in uniform, sat in the court and took notes of the proceedings.

He also took notes of the proceeding against Keri Phillips, another Vincentian soldier in the British Army, who is charged with attempted murder in connection with the Dec. 26, 2021 shooting of fellow Chester Cottage resident, Istah Mack.

The preliminary inquiry into that matter began on Friday and is scheduled to continue on Monday.

Goodey also spoke with Mills, Phillips and Daniel, who is representing both men.

On Jan. 21, an unlawful discharge of firearm charge against Private Brentley Butler, another Vincentian in the British Army, was dismissed after the virtual complainant, 17-year-old Emi Balcombe failed to attend the trial.

Mitigating on Mills’ behalf, Daniel read a letter from Major Williams, who said that Mills joined his company in May 2020 after completing the combat infantry course.

The major said that Mills has demonstrated “a keen intellect and professional competency well beyond what I expect of a soldier of his seniority”.

He said that Mills has recently returned from operations in Estonia as part of NATO’s  enhanced forward presence battle group.

This involved pre-deployment training in Germany, where he showed exceptional determination and resilience despite temperatures below minus 16 degrees Celsius.

Mills is said to have motivated his colleagues with enthusiasm and displayed leadership qualities that mark him out as a potential junior officer.

The major said that Mills had no prior disciplinary entries and his performance would be rated, thus far, as  exceptions.

The officer said he hopes to have Mills back in his company soon, as he is a highly valued and respected member of the team, with a bright future ahead of him.

The letter said that the court should be aware that should Mills be found guilty of any offence, the consequence of any suspended or custodial sentence is discharge from the army.

Daniel said that his client has no previous conviction and is a virgin to the law. He asked the court to consider these things in relation to its sentencing.

‘for every offence there are consequences’

Meanwhile, in his comments on sentencing, Prosecutor Station Sergeant of Police Renrick Cato said there is an old saying that for every action, there is a reaction.

He said there is also a saying that for every offence there are consequences.

Cato asked the court to note that the firearm in question is not registered in St. Vincent and the Grenadines.

He said that the evidence of the police was that the firearm does not appear in the forearms registry, hence the firearm is not licensed in the country.

The prosecutor said that what is striking in the case is that a concerned citizen called the police, who acted on the information and found the firearm in the vehicle.

“The defendant is a soldier by profession. I have listened to the representation by counsel as it relates to the letter that was sent. It seems like he is an outstanding person in his profession,” Cato said.

“And he is of good character,” Daniel interjected.

“These are the things you should consider before finding yourself in a situation that would hamper your position as a soldier,” the prosecutor said.

Guns are as common as cold in SVG

The prosecutor told the court that he had said repeatedly that there is an outcry in SVG regarding firearms.

“Our little SVG has become so much involved when it comes to firearm offences,” Cato said.

He said that long ago, if a school child told a person that he or she has a gun, one would laugh.

“Today, you can’t laugh anymore,” Cato said. “Guns are as common as cold in St. Vincent and the Grenadines.”

The prosecutor noted that the court has to take every case on its own merit.

“But when you have someone who we expect to assist in the reduction of firearm and firearm offences contributing to the increase…, the court must, has to send a message to persons who are in his position or any other person who sees it fitting to have in their possession a firearm without a licence. “

The prosecutor spoke of the public interest, adding that the court has to  protect law-abiding citizens.

“Stray bullets will always be stray bullets. There are too many guns in St. Vincent and the Grenadines.”

Cato said that whatever sentence the court imposes must be such to let the defendant and would-be offenders know that the court has zero tolerance for firearm offences.

In her sentencing remarks, the chief magistrate said that the offence was “most unfortunate” but noted that as the prosecutor said, actions have consequences.

“It never gives me any pleasure to sentence young men, anyone for that matter, who appears before the court.”

Browne said that in the case there was a glowing outline of character reference on Mills’ behalf.

“So, to have become involved in an issue like this which would have caused you to be brought before the court is really unfortunate, but actions have  consequences.”

The chief magistrate began with a starting point of 40% of the maximum prison term, or 2.8 years.

She said that the aggravating features of the offence was the fact that the firearm was concealed and that it was of a type not known to be in SVG.

There were no mitigating features of the offence, and she increased the sentence by six months.

There were no aggravating features regarding the Mills as an offender.

Mitigating on his behalf was the fact that he had no previous conviction and was of good character.

The mitigating features outweighed the aggravating and six months was deducted from the sentence.

The chief magistrate noted that there was a full trial, and, therefore, Mills was not entitled to a discount for an early guilty plea.

She, therefore, sentenced Mills to two years eight months in prison and ordered that the firearm be confiscated.

Browne informed Mills of his right to appeal the sentence.