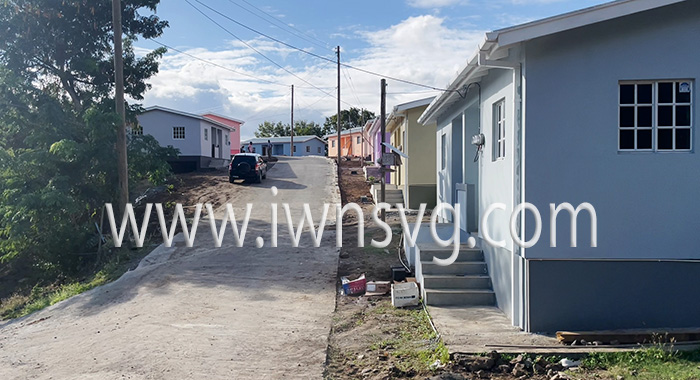 The government of St. Vincent and the Grenadines, on Monday handed over the keys to houses at Lowmans Bay to residents of Rose Place, Kingstown who have to relocate to allow for the construction of a new port in the city.

“What we are here witnessing this afternoon is the substantial completion of construction component of the resettlement project which was designed to resettle residents of Rose Place who live on the beachfront on or before March 30 of 2019,” Lenski Douglas, assistant project manager of Port Modernisation Project, told the ceremony in Lowmans Bay.

Douglas said there was still work to be done at the Lowman housing site, including a stretch of road to be extended to allow for better traffic circulation.

A retaining wall is to be built to support the main road above the three-bedroom structure to the front of the site location.

“Most importantly, we have to have the utilities — electricity and water — connected in the names of the new occupants. But today, we witness the result of focused work of our main contractor, the Housing and Land Development Corporation, which spanned over the past 16 months.”

The site has 28 structures, representing 47 housing units, made up of a mix of one and two-bedroom duplexes along with stand-alone three-bedroom structures.

“Marvellous work has been done and marvellous outcomes have been accomplished.”

He said that the initial project cost was EC$4.47 million.

“By the time we are completed, it’s estimated that we would have spent EC$4.8 million.”

Douglas said that because the project-affected residents included people with physical challenges, pre-selected structures were built specially for these individuals.

“Some affected residents had a house-shop unit in Rose Place. Partially-elevated structures, strategically placed on site, were built to allow for future expansion and continued operation of their businesses.

“These structures represent improved living conditions by far, compared to living on the beach, having to listen to the sound of pounding waves, especially when there is a bad weather advisory, much improved sanitation conditions and privacy as well.”

The construction project created much needed employment, directly and indirectly for over 210 suppliers, providing the necessary employment relief at such a critical time, Douglas said.

“Consultation activities with the project affected residents ensured that their input into the process can be heard as we attempt to manage and mitigate the social impacts.”

He said it was the affected residents who decided that the best way of distributing the housing units would be to have a random selection event.

This event was concluded at the Kingstown Methodist Church Hall last Wednesday.

After Monday’s ceremony, the transition to the residents occupying the facilities commences.

“Both communities stand to benefit from this development. The road repair works and installation of additional street lights are some of the immediate benefits already realised for the Lowmans Bay community, improving safety and ease of access.”

Douglas said that when the previously occupied structures on the beach at Rose Place are demolished and cleared away, the Rose Place community, too, would see benefits.

“We are to mark this one down as another major accomplishment to the housing revolution of the implementation of a socially sensitive construction project as the government seeks to improve lives and livelihoods and deliver modern port facilities through the Kingstown Port Modernisation Project.”

Douglas said that prior to the commencement of work on the site, the Port Modernisation Project executed the resettlement consultancy towards the development of a resettlement action plan to guide discussion on how project affected people will be addressed.

He spoke of the exercise of compensating vendors to relocate their activities from the seawall in Kingstown in May 2020.

The next step is to move towards addressing the shops operated on the Rose Place beachfront, then the fisherfolk and the storage unit owners, Douglas said.

Delivering the featured address, Prime Minister Ralph Gonsalves said that two of the affected persons had lands and told the government they wanted their houses built there.

“And then there are two others who said they would rather compensation. There are persons down there who have their homes elsewhere. I want you to understand that. But, if you are there and you are staying there part of the time, that’s fine. We give you a house up here because that’s how we are. That’s Labour Love. That’s how we do it all the time.”

He said that the people with boats in Rose Place, because they did not come from the community, can haul up their boats anywhere.

The prime minister said that no government in the history of St. Vincent and the Grenadines has built more houses than his Unity Labour Party administration.

“In fact, in nearly 17 years under the NDP, I wah you go and find houses across St. Vincent and Grenadines way NDP build. Julian tell me seven. Oh, they didn’t build them. The fella Mungal Singh from Trinidad did build them.”

“We have built over 2,000 low-income houses. Then we have built hundreds of Lives to Live. We have repaired hundreds of homes, we have given out millions of dollars of building material,” Gonsalves said.