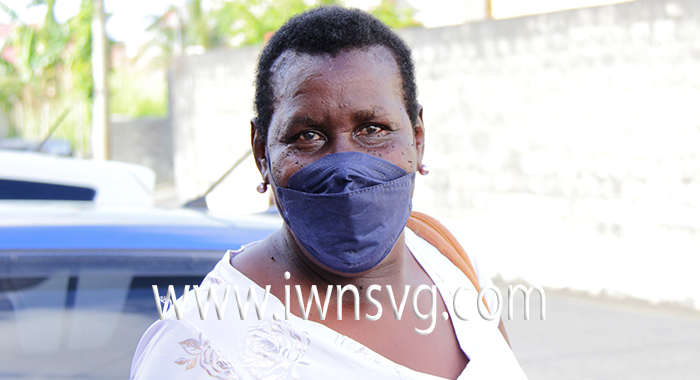 Annamay Lewis outside the Kingstown Magistrate’s Court on Wednesday, Feb. 9, 2022.

The throwing of missile charge against the woman who was initially charged with wounding Prime Minister Ralph Gonsalves last August has been put to Dec. 14.

Annamay Lewis, a 56-year-old vendor of Layou, was scheduled to be tried today (Wednesday) at the Kingstown Magistrate’s Court on a charge that on Aug. 5, at Kingstown, in a public place, to wit White Chapel Road, she threw missiles to the danger of persons who were present.

However, when Senior Magistrate Rickie Burnett called the matter, the prosecutor, Corporal of police Delando Charles, told the court that the prosecution was making an application for an adjournment.

He said that the prosecutor who has conduct of the matter was not in court and he was not “abreast” of the case.

Charles asked the court for a short adjournment.

Burnett then said that he had heard Charles’ application, adding that he had received a letter from Lewis’ counsel, Kay Bacchus-Baptiste.

In the Feb. 8 letter, which was addressed to the Chief Magistrate Rechanne Browne, Bacchus-Baptiste said that she was scheduled to appear before the High Court on two matters and also the Serious offences Court on a traffic matter.

She said that she was still awaiting disclosure of a video that a police corporal  had recorded relating to Lewis’ case.

The lawyer said that given the matters and the time that might be allocated to each, it was highly unlikely that she would be able to attend Lewis’ hearing.

The magistrate noted that both defence and prosecution were requesting an adjournment.

“I know you asked for a short adjournment,” Brunette said, referring to the prosecutor but adjourned the matter to Dec. 14.

The matter had been previously set for trial on Jan. 4.

However, on that date, the court heard that a key prosecution witness was under quarantine, leading to the adjournment to today’s date.

Last August, Lewis made national headlines when she was charged with wounding Gonsalves, who was struck in the head as he walked through a crowd of protesters during an anti-mandatory vaccination demonstration in the capital.

However, that charge was later withdrawn, leaving Lewis to face the throwing missile charge.