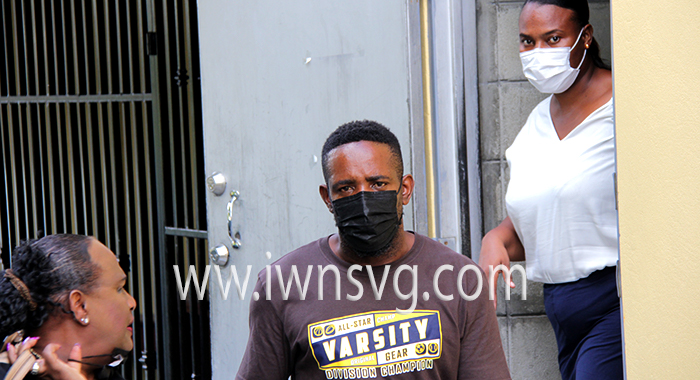 The girlfriend of the van driver accused of not telling Commissioner of Police (COP) Colin John his name and address when ordered to do so on Aug. 5, 2021, in Kingstown, has denied the police chief’s claim.

Odette John, an educator, of Belair, told the trial of her boyfriend, Ken Findlay, that the COP never asked Findlay his name before arresting him at the anti-vaccine protest.

Findlay is also accused of failing to remove his van when instructed to do so and obstructing the flow of traffic by parking the vehicle in the street outside the courthouse building.

He has denied the charges, saying that when he and other omnibus drivers parked there as part of the protest, the traffic had already been diverted.

Chief Magistrate Rechanne Browne reserved her decision to next Wednesday, after hearing this past Wednesday, the evidence of the last defence witness, Adrianna King.

The court did not accept into evidence a video that King reportedly made of the incident.

She said that she knows the police chief but does not know if they are related, because all Johns in Belair, where both she and the COP live, are related.

“I entered the van around 3:30 p.m. There were about 14 vans stationed opposite the Kingstown Vegetable Market, right in front of the court house,” John said.

She said she couldn’t recall the exact time that the COP approached the van but just before he did, Findlay was approached by the head of the Traffic Department Superintendent of Police Kenneth “Scratchy” John, who asked him to move his van.

“At that time, he told Mr. [Kenneth] John he could not because he was pinned in between two other vans and if he clears the traffic he would remove his van,” John told the court.

She said that the traffic chief went back to the front of the protest where the vans were.

“And then probably about a minute or so later, I saw him coming back with the commissioner of police and a whole squad of officers.

“There was a knock on the driver’s window. Ken turned his glass down when the commissioner of police shouted aggressively, ’Yow! Move yo van! Driver, me say move yo van!’

“So Ken was just sitting there helplessly, hopelessly because his van was pinned in.”

John said, adding that there were several officers along with protesters outside of Findlay’s van.”

John said that at that time, a protester approached the COP “and they engaged in a petty quarrel.

“So after engaging in the petty quarrel, he then came back to the van door, opened the van door, hitting Ken in his chest, scuffling him by his t-shirt and remarked, ‘Yo nah hear me say move yo van?’

“He then hit him again and say, ‘Yo nah hear me say move yo van?’ and attempted to pull Ken from the van.”

John said that Findlay asked the police chief what that was all about and what had happened.

“He did not respond. Ken went around with the five black squad officer to the barracks.”

Not a parking lot

During cross examination, by the prosecutor Sergeant 444 Jones, John said that the area where the van was parked was not a parking lot.

“Was it in the public road?” the prosecutor asked.

“Of course it was in the public road.”

“Were there vehicles behind?”

She said she could not say whether Findlay’s van was broken down.

Asked whether she agreed that along that street there is heavy traffic flow out of Kingstown, John responded:

“But during that time, there was a protest action. There was no traffic flow at that time because I can recall when we came out of Paul’s Lot, there was an officer directing the traffic from the market down to Grand Bazaar side.”

John said she was sitting in the vehicle for “roughly two hours” before the police chief came — which was after the incident in which prime minister Ralph Gonsalves was struck in the head.

“Can you say whether there was a chattering noise,” Jones said, having established that there were people around the van.

“It’s a protest. It was loud, it was noisy,” John responded.

Jones said it would have been impossible to hear every word that the COP spoke on that day.

“It would not have been. It was seated inside. He was loud; he was aggressive,” John said.

John said she knows a driver known as Knuckle and his van was parked “more up to the front”.

The witness told the court she could not say if Knuckle removed his van and at what point in time.

John told the court that she was unaware if Findlay was given permission to park his bus along the street.