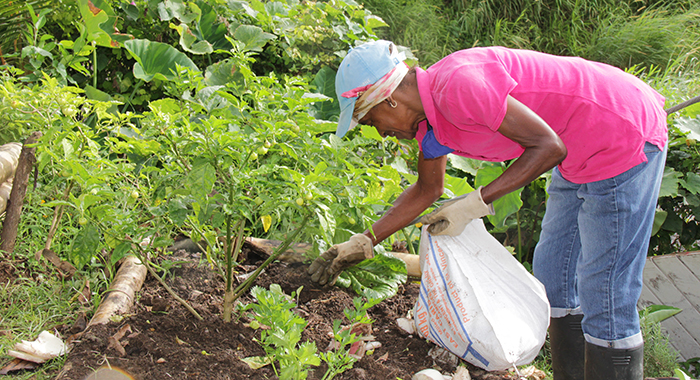 Brenford Findlay, 61, a retired animal health assistant, of Kearton, Barrouallie, has training and experience in plant cultivation. And, like most Vincentians, he has experience in cultivating vegetables and other crops in his backyard.

However, in 2021, after the eruption of La Soufriere volcano, the Richmond Vale Academy (RVA) introduced him to a new method of home gardening. “The way that they showed me to prepare the land, I don’t have to do a lot of weeding now,” Findlay said as he forked the land to prepare terraces.

Meanwhile, that same Saturday morning recently, in Vermont, one of the bread baskets of St. Vincent and the Grenadines, Janelle Hackshaw, commended the RVA’s style of home gardening especially because it is organic. “We got some really nice, big heads of cabbages. They were firm and they tasted different. So it was a really good experience.”

Hackshaw, “a child of the late 70s”, was speaking on behalf of her mother, Silma Moses-Hackshaw, 66, a former nurse, who “has taken ownership” of the family’s backyard garden. “I get to plant something in there sometimes,” the daughter said and laughed as her mother was attending to the garden.

In Barrouallie, Findlay was preparing the land even as the dry season crawled along the hills of his coastal community. He was not deterred, however, as he knows that much more moisture is retained in the soil when he uses to prepare the terraces, the agroecology method, which the RVA taught him.

“After forking the soil, I cover it with wet cardboard. Then I chop up plantain or banana plants and put them on the wet cardboard. On that, I place a layer of animal manure and then comes a layer of dry grass. Because of this, the weeds have it difficult coming through,” Findlay explained.

When he is ready to plant, he digs a hole through the layers, fills the hole with animal manure, then inserts the seeds or seedlings.

“The mulching definitely helps to retain the moisture so that you will find that the plant would be better able to absorb the nutrients from the soil,” Findlay said.

The farms were conducted under projects funded by the University of Exeter, the Global Environment Facility’s Small Grants Programme, and, among others, the Canada Fund for Local Initiatives and involved 10 households in Barrouallie and Vermont.

“What I see is an obvious shift in people’s perception of what ecological farming is and why we should eat organic food,” Danail Petrov, a teacher at RVA, explained.

“Of course, after COVID and the eruption of the volcano, more and more people had problems finding food and food prices went up and more people started thinking about their health. So, all these problems can be tackled in the backyard, if you grow your own food.

Like most people in the Vermont valley, farming was not foreign to the Hackshaws.

But Hackshaw is now so sold on organic farming that she plans to grow her root crops that way, once she can figure out how to do it on a large scale.

Her interest in organic farming was aroused years ago when she accompanied her son on a pre-school visit to an organic farm in North Leeward.

They were given fruits and produce, which stayed good for much longer than those bought in the supermarket or grown the traditional way — with chemical fertiliser — in Vermont.

“From that, I realised that organic farming must be a healthier way of farming because the produce lasted longer; it tasted better.”

A couple years later, she read an article that RVA was assisting people in setting up organic home gardens. Back then, Hackshaw’s yard was planted with lawn grass.

However, sometime in 2019, she noted to her mother that they pay every month to cut the lawn and suggested that they begin to grow vegetables in the yard.

Hackshaw and her mother began to set up the home garden. They made a conscious decision not to use chemical fertiliser, opting for manure from their chickens, and plant cuttings.

Hackshaw also did some research.

“But it just seemed difficult to do it. But we made a conscious effort to do it as organically as possible,” she recounted.

After a while they extended the garden. Then one day, someone from RVA approached the family and told them about the RVA’s home garden project. “I jumped at it. I did the application, because, as I said, I was interested in it a long time ago and this was an opportunity to learn more about it,” Hackshaw said.

Like the Hackshaws, Findlay has reaped his first crop after enrolling in the project.

He said that he is still experimenting with the project, but is pleased with the impact he has seen not only in his produce, but also the soil itself.

“The mulched area feels cooler. There is more moisture available to the plants.”

“This is the first crop since the intervention of RVA and I am pleased with the results.”

And while Findlay farms without synthetic pesticides or chemical fertiliser, he has had no problems with pests, as the RVA has explained to him how to arrange his cultivation to repel vermin.

He also uses the neem plant, soaking the leaves in water for a few days, then spraying the plants with it.

He encouraged people who have the opportunity to enrol in the project.

“I would advise them to try it,” but suggested that farmers keep their projects small. “Because if you don’t have animals, you will have to source the animal manure.”

From his first harvest under the project, Findlay gave some of the produce to his sister and kept most of the remainder for his home. He also sold some cabbages.

“We have to be able to know what we are eating and if you plant your crop, you know exactly what you are putting in it,” said Findlay, who no longer buys vegetables, because one is always in season in his garden.

He is not relying on his home garden to generate money. “Food security, that’s basically it.”

“I’ve been in this thing for a long while but I am very impressed with the way how these guys prepare the beds and I am seeing results… I would advise any farmer in St. Vincent to go that way because it would reduce their labour cost, if they have to pay people to weed,” Findlay said.

Meanwhile, Hackshaw lauded the RVA for their execution of the project.

“Some of the stuff I knew already but they just connected some of the dots for me.”

She noted that the RVA team returned from time to time to check on the garden and conducted a series of workshops. “They taught us how to save seeds, how to make our own compost, and how to take care of the garden. They explained things like companion planting, combining plants to keep pests away. They did a really good job with the after support, which was really good — teach a man to fish,” she said.

The Hackshaws’ home garden has become a talking point in the community, where farming is an everyday activity.

“The garden has generated so much interest in the community. We keep getting questions about how it was done, who did it, how we can get it done for them.

“We had some cabbages that were there. We used to get phone calls in the night about what we did, how come the cabbages look so good. What we did to them, what we sprayed them with.

“Absolutely nothing more than what’s in the beds already — animal manure; brown material like dead leaves and grass; banana bodies and green material, like grass cuttings, and cardboard to help keep down the grass, and that is what fertilised the plants,” Hacksaw said.

Her mother is into herbs and is looking into how to preserve them. The family is hoping to tap into the hotel industry in the Grenadines. In the meantime, Hackshaw is just happy that when she cooks, she can pop out of her kitchen and have access to fresh, healthy, chemical free herbs and vegetables.

One reply on “More Vincies buy into ecological farming”