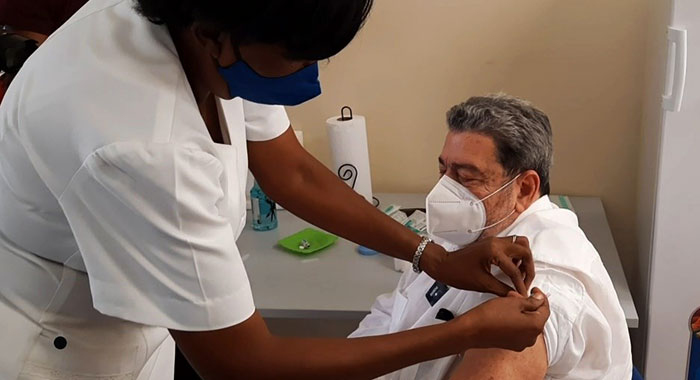 Prime Minister Ralph Gonsalves says he is looking forward to March 18, when he is scheduled to take his 5th COVID-19 jab, just over a year after receiving his first.

The 75-year-old noted on radio on Wednesday that the number of active cases of COVID-19 in the country had fallen to two.

Further, no one is in hospital as a result of the illness.

“So the 18th of March will be the five months after my last dose of the Pfizer and I’m taking a booster. Just like if you have to take boosters for other things or … like in Britain, where you get a lot of cold or in America people take flu shots. It may have to be like that, I don’t know.”

St. Vincent and the Grenadines has seen a constant fall in the number of new or active COVID-19 cases, suggesting that the latest wave of the illness has ended.

“That’s why I am so interested in the young people playing their sports,” he said, noting the National Netball Team’s participation in the recent OECS championship –which the team won.

Gonsalves said that the Vincentian Premier League, a cricket competition, will be held soon.

He said that on Monday, the Cabinet met to discuss a separate issue, but also discussed inter-school sports.

“… I understand that some persons are talking about having a primary school-secondary school sporting events. So I said, ‘Why are we downgrading it? We have the facilities. All we have to do is do the organisation properly.’

“We have to come out of this siege mentality of old. We have to protect ourselves very much during the time of COVID. And it (COVID) is still real and alive … but we need to embrace fresh hope. We have to respair after a period of real extreme challenge and difficulties and even despondency and even some despair because I saw the numbers,” Gonsalves said.

“Of course, if you have any sports events or cultural events, we bear in mind what is taking place with COVID. You still go through the Health Services Subcommittee of NEMO,” he said.

The prime minister said he was pleased to see only two active cases of COVID-19 in the country and nobody hospitalised.

“I believe that the push that we had with including the requirement for the frontline workers and strategic workers, that that has helped,” he said, referring to the vaccine mandate, under which a large section of government workers had to take a jab or lose their jobs.

“Plus, of course, there is a view that the Omicron has helped, in the sense that the Omicron being easy to spread, but wasn’t as dangerous, so it kind of helped to knock out the other variants, the Delta for instance.

8 replies on “PM looking forward to his 5th COVID jab”