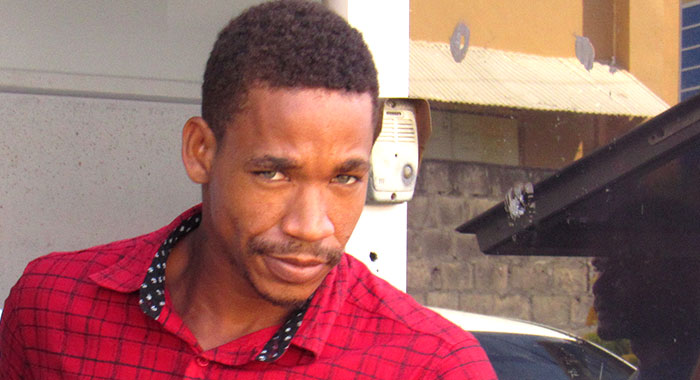 Jahmol Carter will spend the next six months in prison for his crime. (iWN file photo)

A man who told police he was given a job to throw over into a prison compound packages containing a cell phone, nine cell phone batteries, cannabis, and, among other things, three bottles of rum, has been jailed for three months.

Jahmol Carter, 26, received the maximum six-month sentence as he racked up his 19th conviction at the Serious Offences Court on Thursday.

The prosecutor, Station Sergeant of Police Renrick Cato told the court that Carter had told police that the cell phone, some of the batteries, and some of the packages of marijuana belonged to “Jacket”.

Cato said that Jacket is in prison in connection with capital offences.

Carter pleaded guilty that on Wednesday, March 9, at Paul’s Avenue, without lawful authority, he did attempt to introduce into Her Majesty’s Prisons (HMP), one ZTE cellular phone, nine cell phone batteries, three bottles containing liquid substances, 629 grammes of cannabis, one package with tobacco and two packages of high leaf, which are prohibited substances, contrary to the Prison Act.

He entered the same plea on a charge that, also on Wednesday, at Kingstown, he had in his possession 629 grammes of cannabis with intent to supply it to another.

The facts, read by Sergeant Atnel Ash, are that about 12:45 a.m. on Tuesday, PC482 Edwards and Special Service Unit personnel were on mobile patrol duty about Kingstown.

Edwards, the driver of the vehicle, had information that people are in the habit of throwing contraband over the walls of HMP from the Paul’s Avenue area.

While driving along the Paul’s Avenue Public Road, Edwards saw two males in the vicinity of HMP.

The area was lit by street lamps and the men appeared to have recognised the police transport and began acting suspiciously.

Edwards drove the police vehicle passed the two men and pulled in front of them to block them from running.

The officer quickly exited the transport and approached the two men.

Edwards recognised the defendant, who he knows quite well, and shouted, “Police!”

The other man escaped.

Carter consented to a search of his person and belongings and the items were found in a backpack he was carrying.

Edwards opened the bottles and smelled the odour of Sunset Strong Rum coming from them.

He was cautioned and told police that pieces of string in the bag were to be used to lower the bag into the prison compound after throwing it over the wall.

“Officer, is somebody give me to throw over,” Carter told police.

‘It was foolish of me’

In mitigation, Carter said he was at home when someone phoned him, offering him a job to throw the items over the prison wall.

“It was foolish of me to come from Calliaqua and come in town to do something like that, especially around the prison compound. I have a legal job, too,” Carter said.

“Construction. I am working at Marinas,” Carter said.

In his comments on sentencing, Cato told the court that Carter’s criminal record shows he is very familiar with the prison.

“What really strikes me is that these were packaged together and the name ‘Jacket’ is written on them,” the prosecutor said, holding up two of the packages.

“And we all know Jacket is a prisoner at Her Majesty’s Prison for capital offences,” he said.

“This has the batteries and this is the phone. So this really caught my attention. That is why I started off by saying the defendant is well aware of the prison. Up to 2020, he was in prison.”

At this point, Carter said that after being released from prison, he “changed by finding legal work”.

Cato observed that both Jacket and Carter were in prison in 2020.

He further noted the time when the offence was committed.

“The time of the day, 12:40 a.m. and he in Paul’s Lot and he knew what he was doing because on recognising the police transport, he started to act suspiciously and the other guy ran. But he had the bag.”

“Because the guy gave it to me.”

Cato continued: “He is here saying he had a legal job but he chose to go to Paul’s Avenue.”

Cato further told the court that the bag contained a charger, and cigarette lighters.

“Phone, phone batteries, charger. You can just imagine? A package of medical marijuana. And then we have the party: Sunset in the bottles.”

The prosecutor said that those types of offence are not to be taken lightly.

“If it wasn’t for the police officers being so alert, these would be in the prison since yesterday.”

“Right place, right time. Just keep up the good work,” she said of the officer who she had commended one month earlier for the way in which he had apprehended a man who had discharged another man’s licensed firearm in public.

Cato told the court that after the incident with Carter, other things were found at the prison “as relates to the same day”.

The prosecutor said that another striking element of the case was that names were written on the packages indicating who they belong to.

“This is well planned,” Cato said.

The chief magistrate commented that taking Carter’s version at the highest, he didn’t plan the crime but got a job to execute it.

Carter told the court that he had told the police the name of the person who gave him the bag.

“They stopped and searched the person and let him go,” he said.

The chief magistrate told Carter that by his own admission, his was a foolish act. She said that the court has no tolerance for such crimes.

In handing down the sentence, the chief magistrate commented on the maximum sentence for introducing prohibited items into the prison.

“It always strikes me that it is six months,” she said.

She began with a starting point of 4.5 months and, after considering the aggravating and mitigating features of the case, said that she felt that the full six months was warranted.

The magistrate ordered that the drug be destroyed and the other items confiscated.

After his sentencing, Carter inquired about his personal cellular phone, which police had confiscated on his arrest.

Cato said: “I can say to you that that phone is being used as it relates to another investigation. That’s what I will say to you.”

Carter said that the police had caught me with two phones.

“You said calls came to you. You said you got a call and you left Calliaqua and came into Kingstown to do the job. You understand it now?” the chief magistrate said.

6 replies on “Man jailed for trying to send phone, batteries to murder accused ‘Jacket’ in prison”