SVG ‘under no obligation to follow any unilateral sanctions,’ PM says 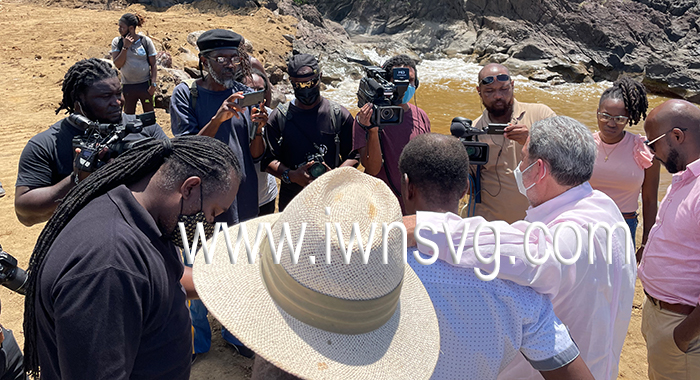 Prime Minister Ralph Gonsalves speaking with the media in Richmond on Friday, March 11, 2022.

St. Vincent and the Grenadines follows “automatically” United Nations Security Council sanctions but is under no obligation to honour those that countries impose unilaterally.

“By virtue of our membership of the United Nations and in relation to security. From time to time, I will get come on my desk individuals or companies who are sanctioned by the United Nations Security Council,” Prime Minister Ralph Gonsalves told the media on Friday.

He said that by virtue of SVG’s membership of the United Nations, from time to time, Security Council sanctions of individuals or companies come to his desk.

“… when I get it, I send it immediately to the Financial Intelligence Unit, the commissioner of police, Financial Services Authority, comptroller of inland revenue, chief immigration officer, and the director general of finance and planning. That’s United Nations Security, sanctions.

“… we are under no obligation to follow any unilateral sanctions by any country,” he said, noting that SVG has, however, mutual legal assistance treaty arrangements with the  United States, Canada, Britain, and other European countries.

“If you have a particular individual or company that you require action to be taken under the mutual assistance treaty, you inform us through the usual channels and there is a process and that triggers an internal legal process in our country.”

He said that if an arrest warrant arrives, either within the terms of the mutual legal assistance treaty or Interpol, “we act because it triggers a particular internal legal process.

He said that because SVG has security relations with the United States, France, Canada and other countries, and the CARICOM Implementation Agency for Crime and Security, through the Regional Security System, Kingstown would be provided with and would provide information.

“…  but the idea that because Country A says John Browne is sanctioned means that in my law, that in my country, that I could pick up John Browne, he’s entitled to certain protections under domestic law. “Of course, that’s when I say the system is triggered.”

The prime minister was responding to a question regarding a warning from George Brathwaite, senior lecturer in political science and international relations, at the University of the West Indies Cave Hill Campus, that Kingstown would do well to abide by the sanctions imposed against Russian individuals and companies.

“George Braithwaite doesn’t guide my government; the law of St. Vincent and the Grenadines does,” Gonsalves said.

Told that Braithwaite was speaking about fear of backlash from countries that have already passed sanctions against Russia.

Asked if he thought that the unilateral sanctions were “justified, moral, ethical, or however you want to describe them”, Gonsalves said:

“I am sure that some of the sanctions against particular individuals may well be justified and Britain and US and so on, all of them may consider them justified.

“All I’m saying is: if John Browne is sanctioned, don’t just tell me that he sanctions. Send something through the legal process because my legal process has to be triggered.”

Gonsalves said that as prime minister, he is sworn to upkeep the laws of SVG.

“If I can act in an executive manner against somebody who you say is a bad man, but you don’t give me the legal basis to trigger my own legislation to deal with John Browne, I will be acting arbitrarily.”

He noted that he was not saying that his government would not “deal with” someone who is sanctioned.

“But you sanction somebody, you would have to make a specific request within the existing legal processes… You might have issued a warrant for the arrest, you might want additional information, … the mutual legal assistance treaty has different dimensions.”

He said “the other day” a yacht belonging to “a wealthy person who is Russian by birth” entered SVG with the owner travelling on a Cypriot passport.

“Now, immediately in some quarters there was a lot of Russophobia but the first thing which you’re informed is that this person is on no sanctions,” Gonsalves said, apparently referring to billionaire Dmitry Rybolovlev and his super yacht “Anna”.

Gonsalves said there were 38 crew members on the yacht, 26 of whom were British.

He said Britain has passed a law prohibiting its citizens from working aboard a sanctioned yacht.

“They didn’t just pronounce it, they put legislation in place,” Gonsalves said.

“I have to do things within a particular legal framework. Otherwise, we could be subjected to certain actions in the court against us for detaining somebody without [legal basis].”

11 replies on “SVG ‘under no obligation to follow any unilateral sanctions,’ PM says”