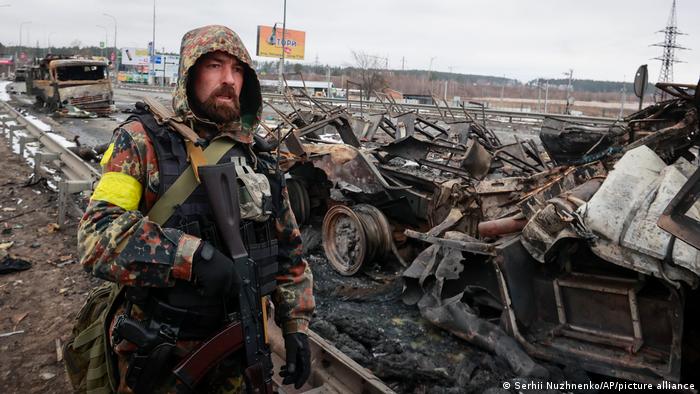 Casualties have mounted amid Russian shelling.

Prime Minister Ralph Gonsalves says he is worried that “an error or a miscalculation of salience” could cause the Russo-Ukrainian conflict to escalate.

He said that any escalation of the conflict could result in “mass destruction affecting the globe even more”.

Gonsalves noted that both the North Atlantic Treaty Organization (NATO) and Russia have nuclear weapons.

“I worry that somebody may make a miscalculation on error of salience — notice the formulation — and that something untoward can happen. And that is why I’m asking for us to have peace.”

Gonsalves spoke as he fielded questions from the media on Friday during a visit to the quarry site in Richmond.

He said he was happy that there were negotiations between Russia and Ukraine taking place in Turkey.

He, however, noted that the talks fell apart on Thursday.

“But that’s okay. They agree to talk, and once you’re talking, there’s hope,” Gonsalves said.

He said he was also “fortified” by two decisions that US President Joe Biden had made, “which indicate to me that he’s not being particularly rash”.

One of them was Washington’s rejection of a no-fly zone over Ukraine.

If a no-fly zone were agreed, Ukraine’s Western allies would use their fighter jets to ward off Russian military aircraft.

Gonsalves also welcomed Biden’s rejection of Poland’s offer to NATO of Russian-made fighter jets to be sent to Ukraine.

“And on the other hand, where the Russians are agreeing, even though there are reports that it is breached, for humanitarian corridors for people to leave, signaling to me that both sides may well have an apprehension that this thing can get further out of hand.”

The prime minister was asked whether the position of his government has changed as the conflict has progressed.

“We expressed our position, clear, in principle, on all of the issues involved,” he said.

Gonsalves said that Kingstown’s position was outlined in a letter he sent to Russia’s President Vladimir Putin and in its statements to the United Nations General Assembly.

“And for St. Vincent and Grenadines, we remain steadfast in relation to the principles of the Charter of the United Nations, because those are existential: peaceful settlement of disputes, issues touching on sovereignty and independence, territorial integrity, non-interference and non-intervention in another country’s affairs.”

He said that he has always spoken about these principles, adding that some countries are now coming to them.

Gonsalves urged people “to read and study the relationship between Russia and Ukraine over the years and with NATO” in order to get “a glimpse at the complexity of this thing”.

Asked if there was anything particular about that relationship that he would like to point out, Gonsalves suggested former US Secretary of State Henry Kissinger’s May 2014 commentary on Russo-Ukrainian relations.

“And he further said this: he said the test of these principles is not absolute satisfaction but what he calls balanced dissatisfaction.”