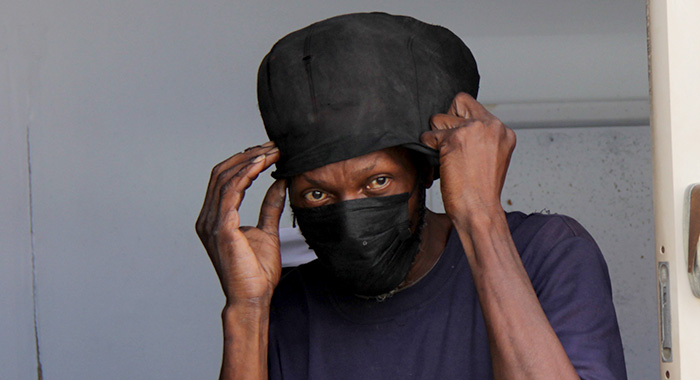 Edwin Edwards leaves the Kingstown Magistrate’s Court on Monday, Dec. 5, for Her Majesty’s Prison, where he will await his sentencing on Friday. (iWN photo)

A man who suggested in December that an employee of a store in Kingstown was in on his shoplifting has been jailed for stealing from a hardware twice in as many days and assaulting an employee.

He also pleaded guilty to a charge that on March 21, at Arnos Vale,  he assaulted Camronique John, of Richland Park, causing actual bodily harm.

The facts of the case, as read by acting Corporal of Police Corlene Samuel, are that about 9:45 a.m. on March 21, Keith Bailey, the manager of Ace 2, at the Joshua Centre, in Arnos Vale, saw Edwards enter the store.

Bailey knew of Edwards and, having received certain information, he and other employees kept him under observation.

The manager noticed that Edwards was putting items into a bag and was acting suspiciously.
Bailey called Ace Kingstown, from where the CCTV system was monitored and asked them to check the system.

The Kingstown store relayed certain information to Bailey, who noticed that Edwards was trying to leave the store.

Edwards got to the exit with his bag and John inquired about his receipt and whether he had paid for the items.

She requested a search of the bag but Edwards did not consent.

Bailey left his office and told the defendant of his observation and informed him that he had called the police.

However, Edwards insisted on leaving, so Bailey held on to his bag.

John was at the door and the defendant pushed her in an attempt to leave, squeezing John’s hand in the process.

A police officer who was in plain clothes was at the store and assisted in apprehending Edwards.

A check of Edwards’ bag revealed the stolen items and when the CCTV footage was reviewed, it showed that Edwards had stolen items from the store the previous day.

All the items stolen on Monday were recovered, but items valued at EC$644.01, which Edwards stole on Sunday, were not recovered.

In mitigation, Edwards told the court that he paints vehicles and does a “couple other things” like masonry for a living.

Senior Magistrate Rickie Burnett asked Edwards if he was before the court on similar charges.

Edwards responded in the affirmative.

“When I heard the facts in the matter, something clicked in my head that the defendant was before this court entering Jax and Coreas.”

Burnett, referring to Edwards’ criminal record, noted that on Dec. 5, 2021, he stole items from Jax Enterprises and Coreas City Store.

The magistrate asked a court officer to check whether Edwards had paid the fines the court had imposed for those crimes.

The defendant said he had not paid the fines.

“Well, you have some jail time here,” the magistrate said.

“So, in your head, you are of the view that when you do these things, all the court will do is to order you to pay compensation and make a restitution order…

“Maybe you are of the view that if I do this again, maybe it would be the same outcome. Well, that is not going to be the outcome today. You are a big man — 50 years old. I have to put a stop to it. I have to stop you.”

Burnett told Edwards that whether he had paid the fines imposed last year is a different matter.

“But the matters before me, you have to go to prison. There is no if or but about that. The way you are conducting yourself, the court has to give you some time to reflect…”

For the March 20 offence, Edwards was jailed for four months.

The magistrate said the fact that Edwards had recent convictions for a similar offence was aggravating.

The court also imposed a four-month sentence for the March 21 offence.

This sentence would run consecutive to the other prison term, but concurrent to a three-month jail term for assaulting John.

“So, in effect, you will do eight. months. But you have some compensation that was not paid. That will take care of itself,” Burnett said.

Edwards had also been bonded for one year in the sum of EC$1,500. He was unable to pay the bond and was ordered to serve an additional four-month jail term.

3 replies on “Shoplifter strikes two days in a row”