We all stand with Ukraine 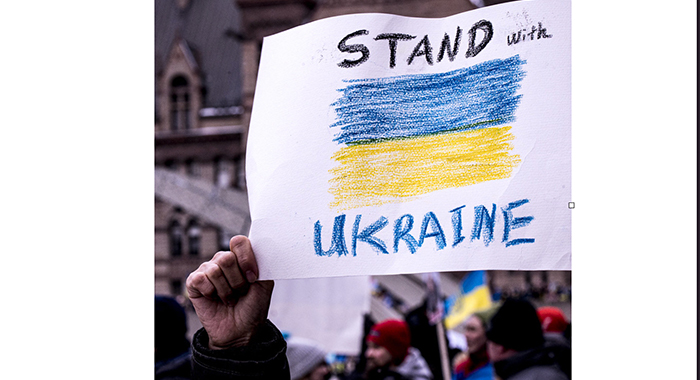 People across the globe have been shocked and moved by the harrowing scenes from Ukraine. Whole cities are being destroyed by Russian missiles, with hospitals, apartment buildings and railway stations reduced to rubble. Thousands have been killed, including many children. Three million people — equivalent to the entire population of Jamaica — have fled their homeland, uncertain if they will ever return. Of these, more than 1.5 million are children. According to UNICEF, since the start of the war, 75,000 children per day have become refugees — that’s one child almost every single second. What was once a peaceful, free and democratic country has been subjected to fear, destruction and death.

Russia’s assault on Ukraine is an unprovoked, premeditated and barbaric attack against a sovereign state. And yet Vladimir Putin has shamelessly sought to justify the horror he has unleashed. He claims he is protecting ethnic Russians from an imagined genocide. He claims he is responding to NATO provocation. He claims that Ukraine is not a real country. The truth is that Putin is lying to his people and he is lying to the world.

But the world has seen through Putin’s lies. Earlier this month 141 of the 193 United Nations (UN) Member States voted in favour of a UN resolution deploring the Russian invasion (only five countries voted against the resolution — Russia, North Korea, Belarus, Eritrea and Syria) and demanding that Russia “immediately, completely and unconditionally withdraw all of its military forces from Ukraine”.

Caribbean states have been at the forefront of international action, with all 15 CARICOM countries backing the UN resolution. CARICOM issued its own, clear statement against the “violation of the territorial integrity and sovereignty of Ukraine”. Caribbean leaders condemned Russia’s assault on multilateralism, upon which the independence of small states rests.

The strength of Caribbean leadership on this issue has surprised some people. Many have asked why their governments have taken such a strong stance. Why get involved in someone else’s fight? What has a war five thousand miles away got to do with people here?

The fact is that this needless invasion has a direct impact on us all. Putin’s actions are sending economic shockwaves around the world, driving up food and fuel prices and increasing the cost of living. We are already feeling those effects here.

More than this, however, Putin’s war of choice is a direct attack on the principles of sovereignty and self-determination. These can seem like abstract ideas but they matter to us all. As a sovereign state, Ukraine has a right to determine its own future — to choose its own allies, secure its own borders, and to trade and deal with whomever it wants. This is the same sovereignty that the countries of the Caribbean rightly cherish; the same principles of self-determination on which all our countries are built. In trampling Ukraine’s sovereignty, Russia’s bullying aggression is threatening all of our freedoms. The implications for all of us are profound.

And so it has been vitally important that the countries of the Caribbean speak so clearly on this issue, and from a position of such clear moral authority. Once again — just as we saw in the COP26 climate talks last year— the voice of the Caribbean is being heard loud and clear on the world stage. Our governments — in London, Ottawa, Washington, and the 27 Member States of the European Union — have been proud to stand with you on this, together with such a large coalition of countries across every continent.

Our dispute is not with the Russian people, but with Putin and his government and their proxies, including a well-established and insidious propaganda machinery. His flagrant violation of international law, and the barbaric suffering they are inflicting on the people of Ukraine, must not succeed; 141 countries have made that clear.

The people of Ukraine stand firm for the core values every democracy is built upon and take heart from knowing that the world stands with them. This struggle is not theirs alone. In defending Ukraine and her people, we defend ourselves, our freedoms and the right to self-determination, which we cherish. The aggressors must not win. We are confident in Ukrainian President Zelenskyy’s prediction: “Life will win over death, and the light will win over darkness”. We must all #StandWithUkraine

Lilian Chatterjee, high commissioner of Canada to Barbados and the Eastern Caribbean States

Linda Taglialatela, U.S. Ambassador to St. Vincent and the Grenadines

Malgorzata Wasilewska, head of delegation of the European Union to Barbados, the Eastern Caribbean States, the OECS and CARICOM/CARIFORUM.

2 replies on “We all stand with Ukraine”