ULP showers itself with ‘litany of untruths, self gloating and ridiculousness’ — Cummings 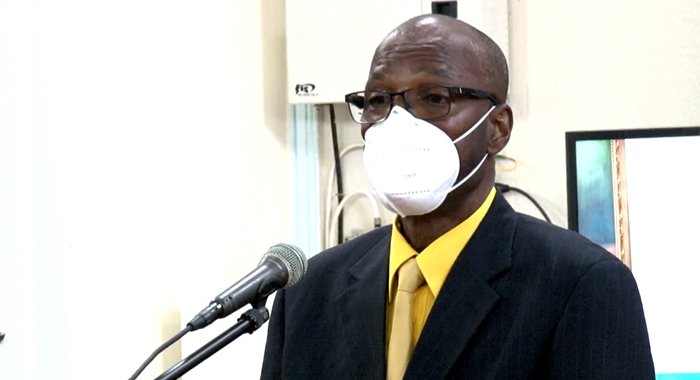 An opposition lawmaker has described as “a litany of untruths, self gloating and ridiculousness” government MPs praise of the Unity Labour Party on its 21 anniversary in office.

During Thursday’s meeting of Parliament, Daniel Cummings, chairman of the opposition New Democratic Party, rose at 11:58 a.m. and noted to the Speaker the context in which that meeting of the national assembly was taking place.

Cummings, who is MP for West Kingstown, noted that he was in Trinidad on medical grounds for nearly a year.

He said that while he did not have medical leave, there was no cause for him to be alarmed as an MP.

“… because Parliament did not meet in that year in a sufficient number of times for my absence that would have caused you to take action,” Cummings said.

He noted that Thursday’s meeting of Parliament was the first since the Budget was approved in January.

“And I want to place that into context about the reason for Parliament and what this exercise is about.

“We have been here from 10 o’clock — at least I was here before 10 o’clock. We have a number of matters to be dealt with and thus far, we have had to sit and listen to a litany of untruths, self-gloating and ridiculousness.”

He was speaking about the congratulatory messages that government MPs had given to the ULP ahead of its 21 anniversary in office on Monday — March 28.

Cummings said it was “therefore, absolutely necessary” for him as NDP chairman to congratulate the party’s president and members on the staging of its convention last month.

The MP said that the NDP held its convention “at a time when COVID has prevented the other side — so some of them claim — from holding a convention.

“Indeed, the braggarts have not have a convention for very many years,” Cummings said.

He told Parliament that not only did the NDP hold “a full fledge convention, we also were able to use the electronic media to have free and fair elections and to elect a new team of persons to guide our party in the very challenging works that we must undertake in staving off the negative attribute our people feel consequent upon the many years of a government that has obviously lost its way”.

He noted that the NDP won the majority vote in the November 2020 general election.

In that poll, the NDP lost for a fifth consecutive term to the ULP.

“We are a party, who, unlike the other side in 1998 brought this country to tears, having lost the election under the terms and conditions that same first-past-the-post, they said and endeavoured to make this country ungovernable.

“That is the party we just heard from. They are the ones who caused the pregnant women to have to have their children delivered on the street, cannot get access to hospital.

“They are the ones who caused investors who had committed themselves to bring investment into this country to run because of the chaos created by their post-election dictates and actions, sanctioned by the leadership of the party.”

Cummings said that under the NDP’s tenure from 1984 to 2001, SVG saw “economic growth, unprecedented”.

However, over the last 21 years, “we have seen the flip-side,” he said.

“We have seen the lowest growth ever over that period of time while neighbouring countries are doing well. That is what they are boasting about.”

He said that the level of crime under the ULP government is “unprecedented” although the party came to office promising to be tough on crime and the causes of crime.

Despite this promise, the ULP administration rehired two police officers who were convicted of beating a teen into a coma when he was in custody, Cummings pointed out.

“How can we have faith in a police service whose members have been charged and convicted of serious crimes, beating up poor, innocent people, and those officers found guilty, put back into the police force?” Cummings said.

“Is that something to come here and brag about? I am not hearing any thunder on the other side. When we sat here and listened to their folly and the tissue of lies, we have to listen but I want the people of this country to know—”

However, at this point Tourism Minister Carlos James, a former speaker of the House of Assembly, stood and said it appeared that Cummings was responding to or debating the comments made during the congratulatory session.

“There is nothing wrong about going on to talk glorious things about their political party during their convention. But he is responding or providing a debate during this segment on congratulatory remarks,” James said.

The Speaker, Rochelle Forde, reminded all members that Parliament follows an agenda as contained in the order paper and they are under congratulatory remarks.

She invited Cummings to continue his remarks within the context of the congratulatory remarks.

“The truth is a painful thing…”

He further spoke of “he record of this noble institution (NDP), the oldest one, by far, in St. Vincent and the Grenadines, the only one that has succeeded its founding father…”

2 replies on “ULP showers itself with ‘litany of untruths, self gloating and ridiculousness’ — Cummings”