MP threaten to give minister ‘a Chris Rock special’ (+Video) 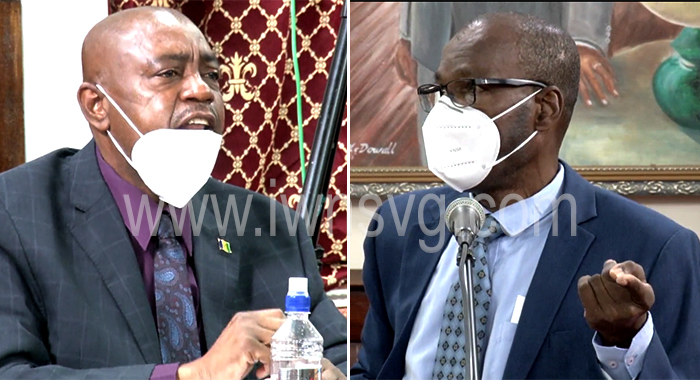 A composite photograph of MPs Frederick Stephenson, left, and Daniel Cummings during the exchange in Parliament on Thursday, March 31, 2022.

Days after a slapping incident at the Academy Awards generated mixed reaction globally, an MP in St. Vincent and the Grenadines has threatened to give another “a Chris Rock special”.

On Sunday, Will Smith’s slapped comedian and Academy Awards host Chris Rock over a joke about Smith’s wife.

And, on Thursday, West Kingstown MP Daniel Cummings told Minister of the Public Service, Frederick Stephenson that he would have gotten a “Chris Rock special” were they near each other.

Cummings was debating a resolution, COVID-19 (Miscellaneous Amendments) Order 2021, (No.32 Of 2021)” when the exchange occurred.

He was saying: “On this side of the house, one of the portfolios I shadow is health. And, therefore, I have been on the forefront of discussing matters relating to COVID from this side.”

“From overseas,” Stephenson said in a muted comment from across the floor.

“Madam Speaker, I charge you to advise the honorable minister who makes these cynical comments about my medical attention to resist being asinine in his comments, because that is what he’s doing. You do not make snide remarks about people’s medical needs.”

Cummings continued: “If he were close to me, he would get a Chris Rock special.

Some laughter and applause erupted and the Speaker, Rochelle Forde banged her gavel.

But Stephenson maintained that Cummings was overseas.

Cummings spent about a year in Trinidad where he had gone for medical attention for a back injury he said he suffered in parliament when he and other opposition lawmakers were thrown out of the assembly chamber in March 2011.

The MP was prevented from leaving Trinidad after the country closed its borders in response to the COVID-19 pandemic.

However, if Cummings was referring to a slap, it appeared that Stephenson, a lay preacher, would not have turned the other cheek.

“Thank you Madam Speaker,” Cummings said as the speaker united him to continue with the debate.

“Try that outside,” Stephenson said again.