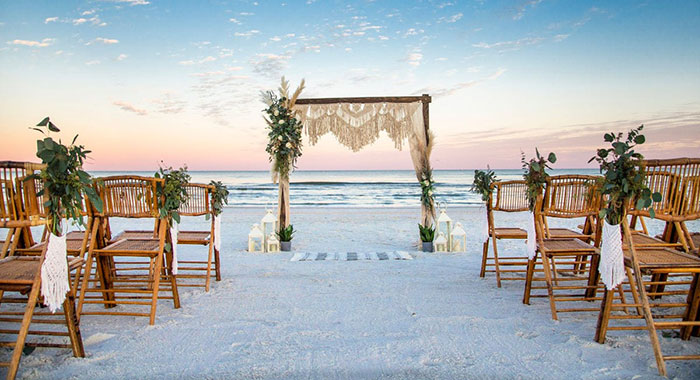 And internet photo of a beach wedding.

St. Vincent and the Grenadines has amended its marriage regulations to make it possible for people to tie the knot after being in the destination for just one day.

In moving the amendment in Parliament, Prime Minister Ralph Gonsalves noted that his government has amended the Marriage Act to facilitate the process of people getting married.

“Compared to several other countries, we make this matter far too difficult,” he said.

The prime minister said especially as SVG is a multi island state, “there is too much centralisation in the City of Kingstown and with the Registrar General and the number of days required are just too many for many persons prior to entering into marriage”.

He said that if SVG is to take advantage of a growing market for wedding destinations, it is important that the government puts the institutional arrangements in place.

“The hoteliers, the Ministry of Tourism, the Tourism Authority have been calling for some changes and we have made some — and the small ones, on the face of it which we are doing today to the regulations, are important and they may well be others.”

He said that, by and large, the amendment would not impact “on Vincentians, generally speaking, who want to get married.

“Because people who want to get married here will tend to plan their business in advance.

“So these changes are rarely to facilitate those who would wish to come to the destination to get married and move on, as happens in many countries in the Caribbean and the world.”

He said that before the amendment, the law required a declaration by the applicants that they had been resident in SVG for at least three days prior to the date of the application for the marriage licence.

With the change to the law, a notary public could make the declaration and only one day’s residence in the country is required.

“I don’t think that this should be particularly controversial and wherever we have to make any further amendments to facilitate this particular process so that we can get … an increased part of the business, in our beautiful islands,” the prime minister said.

This will allow for the governor general, who grants marriage licence under Section 23 of the Marriage Act, to be able to delegate this particular power to district officers and revenue officers in the Grenadines.

He said this illuminated the need for someone to travel from the Grenadines to Kingstown to obtain a marriage licence.

“It has proven to be a bit inconvenient to those persons who are coming to our destination and who may have a preference for the Grenadines as a particular choice for their destination weddings.”

He said that in St. Lucia, Antigua, or Grenada, all of these processes could take place in a day.

The tourism minister said that the Grenadines had been a leading wedding destination.

“We have fallen off for a number of years primarily because of these challenges that persons would incur when they come to St. Vincent and the Grenadines.”

He said that globally, destination weddings are a US$16 billion sector.

“It’s a huge, huge market. And we’re talking over 25% of Americans travel for destination weddings, and 2.4 million weddings are performed,” James said.

He said that SVG has everything that people want in terms of destination weddings, such as beautiful beaches, weather, friendly people, “perfect” hotel and “the right scenery”.

And, Leader of the Opposition, Godwin Friday, supported the amendment, saying:

“I have listened to the description and the promises that this seemingly very small amendment may have for the tourism sector, that is, the specific niche market of wedding destinations tourism.”

The opposition leader, who is his party’s spokesperson on tourism matters, said the tourism industry has taken considerable blows over the last few years and had been lagging behind even before then.

He said it is always a good thing when SVG can promote additional avenues to attract more visitors.

“It’s not a foregone conclusion, necessarily, that the amendment would bring more people here because everybody else is upping their game and trying to provide more services and make things more user friendly and easier to access and so forth.”

He expressed hope that the amendment would also benefit Vincentians living in the Grenadines.