Man caught driving without licence 2 days in a row 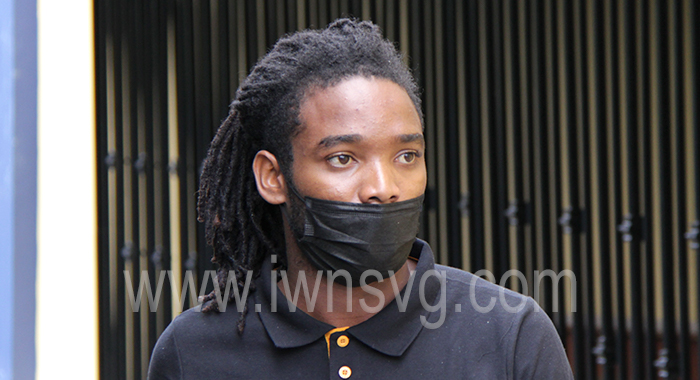 O’Dayne Hoyte leaves the Serious Offences Court after his sentencing on April 4, 2022.

An unlicensed driver has escaped immediate jail time for driving dangerously one day after police charged him for driving without a permit and other offences.

O’Dayne Hoyte, 20, of Owia, was nabbed in Kingstown on March 25, after he and another driver did not comply with a “no crossover” road sign.

On March 25, Police Constable 379 Hamilton of the traffic department was the driver of transport G948, in which a party of officers, headed by Corporal 189 Caesar, was doing traffic checks about the city.

Upon reaching the area of PH Veira Building on Bay Street, travelling in the direction of the hospital from the police station, Hamilton observed two motor vehicles exiting the Windward Bus Terminal and driving over the “no crossover” road sign.

The vehicles turned right and headed in the direction of the police station.

The officers failed in their attempts to stop the vehicles and Hamilton gave chase and stopped both vehicles on Back Street, near Voyager.

Hamilton asked Hoyte why he had failed to comply with the “no crossover” road sign and he responded, “Which road sign?”

The officer told Hoyte about the location of the road sign and informed him that she was going to issue him with a traffic ticket and requested his driver’s permit.

Hoyte told the officer that he did not have it with him.

Hoyte was also arrested and taken to the Traffic Department.

He was charged with driving motor vehicle P4753, without being the holder of a driving permit; driving the vehicle without there being in force a policy of insurance in respect of third party risk in respect of the said vehicle; and failing to comply with the road sign “no crossover”.

Hoyte was granted bail and ordered to attend court.

Then, the following day, March 26, about 10:45 p.m. motor vehicle P5787, driven by Albert Morris, of Villa, was travelling towards Villa along the Arnos Vale Public Road, via the ET Joshua Tarmac.

On approaching the “no entry” sign at Ace 3, Morris saw the lights of a vehicle approaching from the left side.

The vehicle was P4753, driven by Hoyte, which was travelling along the Arnos Vale main road, and had made a right turn on approaching the “no entry” sign.

Morris stopped his vehicle but Hoyte stopped some distance away then approached Morris and told him he would repair the damage.

The matter was reported to PC 889 Huggins, who visited the scene and noted that Hoyte was the driver of P4753.

Huggins had met Hoyte at the station the previous day, when he was charged with the traffic offences.

Hoyte was remanded to prison on March 30 after he pleaded guilty to the charges.

He said that his client had been shaken up by the time he spent on remands.

“He looks fine to me,” the chief magistrate responded.

“I am sure there are others around there saying the same thing,” Connell said, referring to the prison.

The magistrate said that the court would consider prison time in such a case, where an offender was charged with an offence and went on to commit the same offences the following day.

Connell asked the court not to send his client to prison, adding that the court should deal with the matters with the seriousness they deserve, but should also show some mercy.

He was also barred from holding or abstaining a driver’s licence for 12 months beginning last Monday.

For failing to comply with the “no crossover” road sign, Hoyte was fined EC$250 to be paid forthwith two weeks in prison.

On the March 26 charges, he was fined EC$700 for the insurance offence, to be paid by May 4 or seven weeks in prison.

By that date, he is also to pay EC$250 for failing to comply with the “no entry” road sign, or spend two weeks in prison.

Further, Hoyte must pay EC$400 by May 27 or go to jail for four weeks for failing to stop after being involved in an accident.

For driving in a dangerous manner, he was sentenced to four years in prison, suspended for four months.

He was also disqualified from holding or obtaining a driver’s permit for 12 months beginning last Monday.

After handing down the sentences, the chief magistrate told Hoyte that should he decide to drive anytime in the four months, he will put himself in prison.