Hotels won’t buy local meat if they see where, how animals are killed — butcher 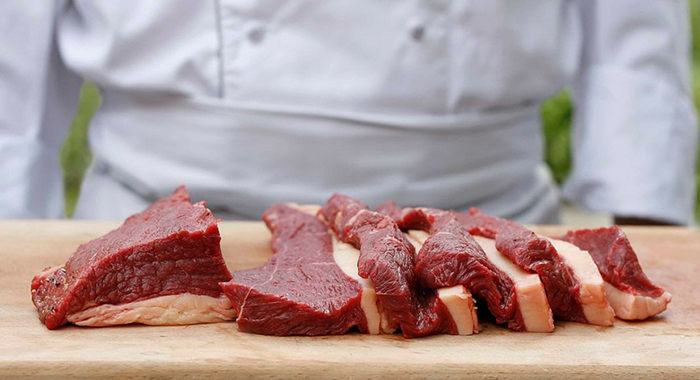 A local butcher says that while the government says that the opening of more hotels will result in increased demand for local produce and meat, this may not materialize.

“Beaches has promised to buy local. But no effort is being made to train any young person to cut the meat to suit the hotels,” Richard Gibson told iWitness News.

Gibson, who was a butcher in England for years before returning to St. Vincent and opening Midway Butchers, said that in England, he is a licensed slaughterman and is a master butcher.

However, in St. Vincent, he buys carcasses, rather than slaughter animals himself.

“I do not kill my own animal. I am not equipped here… I haven’t got the facility here to kill,” Gibson said.

“A lot of the animals are being killed in a field or under a mango tree in inhumane conditions.

There are no proper abattoirs in St. Vincent and the Grenadines, and farmers and butchers make do before transporting the animal carcasses to their meat shops.

Gibson said that he has been suggesting for 25 years “that we should have a slaughter house with a cold room.

“It’s a very expensive thing for the butchers to do here because they get in their trucks, somebody from Georgetown or Orange Hill may say they have a cattle to sell. When they go and see the farmer, they can’t come to a price. So that is a wasted journey and expense on behalf of the butchers.”

Gibson said that farmers are also paying attention to the retail price of the meat.

“But you must realise a little establishment like this, my electricity bill here, every month is $2,500. People who are selling meat by the roadside, they haven’t got an electricity bill to pay. So there is no need to check out what the butchers are charging.”

He said that people are ignorant about the art of butchering, resulting in consumers being served substandard meat.

“A lot of people kill beef today and eat beef today. That is no good. It wants to be aged,” he said and suggested that people watch YouTube videos about the aging of meat.

“They will tell you exactly what I’m telling you today. This year is 62 years I’m doing butchering and nobody coming forward to learn the trade…

“When I left St. Vincent in the 1960s, the same type of butchering was going on as today; chop up meat everywhere — wherever the cutlass lands.

He said that a slaughterhouse would address the issue of the price of meat.

“Have a slaughterhouse and the slaughterhouse owner will buy a cattle at the live weight by quality — because you have some cattle that are 80-90% fat. Some pigs got about three inches of fat on the back and they all want the same price for that animal.

“There’s no quality control here. And you have a cow that had four or five calves, that meat is only good for stewing. You can’t sell steak like that. It is like cooking leather,” Gibson said.

“Let’s have a standard. Let the butchers in St. Vincent get together. The slaughterhouse doesn’t have to be run by the government. Private enterprise can run the slaughterhouse and it can be done.”

Meanwhile, a manager at a local supermarket said that there are many issues surrounding meat production in the country.

“It is not just the slaughtering of the animal but also the way they are transported,” the manager said, adding that he has asked his suppliers to address the issue.

4 replies on “Hotels won’t buy local meat if they see where, how animals are killed — butcher”