Mastermind jailed for 31 years, shooter gets 13 in ‘Precious’ murder case 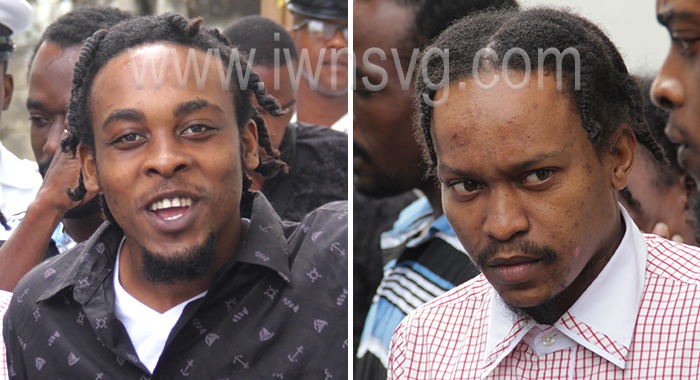 A composite photo of Etson Timm, left, and Jeremy Alexander outside the Serious Offences Court on Dec. 3, 2019, when they were committed to stand trial for murder.

A man who threatened to kill his friend if he did not murder another man has been sentenced to 31 years in jail for the slaying while the man who actually pulled the trigger was jailed for 13.

In handing down the three-decade jail term on Etson Timm on Wednesday, Justice Brian Cottle noted that his lawyer, Stephen Williams had noted that Timm did not fire the shot.

“… but his was the controlling mind behind the killing. The victim was not known to the shooter,” Cottle said, adding that he did not consider this to be a mitigating feature.

The two men had been in each other’s company since the previous day.

Timm stopped the vehicle at a shop in Rose Place to buy marijuana.

He pointed out a young man and told Alexander that they are enemies, they having had a disagreement previously and Timm expressed a desire to get rid of him.

Timm, who Alexander knew had a loaded pistol, demanded that Alexander kill Davy and threatened to murder Alexander if he did not comply.

Timm drove around the corner and parked.

Alexander took the pistol, put on a mask, approached the man and shot him in the head.

He fired another shot to deter pursuit and ran back to the car.

Alexander gave the mask and gun back to Timm, and they fled the scene in the car.

The following day, Alexander learned that the man he had shot was Darren “Precious” Davy, an 18-year-old labourer, of Arnos Vale.

He and Timm were arrested and charged and at their arraignment in October 2020, they both pleaded not guilty.

Then, on Monday, April 11, Timm pleaded guilty to the charge and was sentenced on Wednesday, April 13.

In sentencing Timm at High Court No. 1 in Kingstown, Justice Brian Cottle

established a starting sentence of 40 years, saying he had not taken into account any aggravating or mitigating features of the offence.

He then considered those features and adjusted the sentence.

The judge said that aggravating was that the murder took place in full view of the public.

There was a significant degree of planning or premeditation, in that Timm brought the gun to the scene, gave the weapon and instructions to Alexander and waited in the getaway car.

The killing was unprovoked and the gun was not recovered.

Justice Cottle found no relevant mitigating feature of the offence.

Regarding the offender, he found no aggravating features, and said mitigating on his behalf was that he was still relatively young and had good prospects for rehab.

The judge said that Timm showed genuine remorse and was only 23 years old at the time and has a 5 year-old son.

He said that the court noted Timm’s personal circumstances — as outlined by his lawyer, Stephen Williams — in mitigation.

Timm attended church for some time, grew up in poverty and lacked adequate parental guidance which played a significant role in his socialisation.

The judge said that after considering the aggravating and mitigating features of the offence he saw no reason to disturb the 40 year sentence.

In considering the discount for the guilty plea, Justice Cottle said this came at the “latest opportunity”, after the advice of counsel, after Timm had knowledge of Alexander’s sentence and the fact that Alexander was willing to testify against him.

The judge granted a discount of 15%, which brought the sentence to 34 years.

He subtracted the 2 years, 11 months, three days that Timm had spent on remand, leaving him to serve a sentence of 31 years and 27 days.

“Still, on his release, the prisoner will still have many days if the good Lord allows and I hope he will make the best use of the rest of the days allowed him,” Justice Cottle said.

On April 1, Justice Cottle sentenced Alexander to serve 13 years in prison and gave him the full one-third discount for his guilty plea and the sentence fell to 10 years five months and 24 days.

When the time spent on remand was deducted, the sentence fell to 8 years, five months and 24 days in prison from April 1.

Mitigating on Alexander’s behalf on April 1, lawyer Kay Bacchus-Baptiste accepted the facts as submitted by the prosecution, represented by Crown Counsel Rose-Ann Richardson.

Bacchus-Baptiste said that the defense and the prosecution had collaborated over time to arrive at that stage.

She told the court that the facts reflect the duress that her client was under when he committed the offence.

She pointed out that Alexander committed the offence under threat and cooperated fully with the police afterwards.

The lawyer said her client gave a statement to police despite Timm having threatened to harm him if he did.

The case might never have been solved had it not been for Alexander’s cooperation, she said, and argued that the only aggravating factor was that the killing was committed in the view of the public.

Bacchus-Baptiste, however, said that taking into account the duress, Alexander’s youthfulness, and the fact that he had never gotten into any trouble before, the nominal sentence should not be increased.

Mitigating was that he acted because he was forced to do so and that he was of very good character, the lawyer said.

She said this could be borne out by a letter that Justice of the Peace Marlon Joseph said he felt constrained to write to the Director of Public Prosecution and shared with the defendant.

The lawyer said that her client had shown genuine remorse and had good prospects for rehabilitation and the mitigating feature outweighs “the lone aggravating feature mentioned”.

She asked that Alexander be given the full one-third discount for his guilty plea,

“He did not do it at the earliest opportunity but once requested, he cooperated fully and it was logistics in getting statements from him that delayed the matter. The Crown and prosecution were always in agreement,” Bacchus-Baptiste said.

She asked the court to consider in its sentence the two years 10 months and six days that Alexander had been in custody awaiting disposal of his matter.

“This is a commendable one that the prosecution admitted that if the defendant did not take the step that he did it might have been very difficult to pursue this matter, especially against the co-defendant.”

She said this is worth taking into account, adding that it is not easy for a defendant, in such a situation, to give evidence against a friend.

“It is not a light decision. It’s a very difficult decision that he made and he must be commended in the interest of justice.”

The lawyer asked that the sentence really reflect this, adding that it will encourage other persons in similar situations “to be bold in taking that step and no doubt, dealing with certain consequences of being that bold”.

In handing down his sentence, Cottle said that he had seen the letter by Joseph detailing his intimate connection with the Alexander family.

The justice of the peace said that the family was close-knit and the young family members had benefited from the transmission of values such as honesty and hard work.

Joseph said he was surprised to learn of Alexander’s violence and he still considered him to be a good young man and was happy to write in mitigation.

The judge noted that the court is allowed to depart from the sentencing guidelines only in exceptional circumstances.

He established a starting sentence of 30 years, adding that he had taken no aggravating or mitigating factors into account when choosing the starting point.

When arrested, Alexander cooperated with the authorities and his assistance was indispensable in solving the crime.

The judge saw no aggravating features of the offender, adding that mitigating was the fact that he had one single conviction for possession of cannabis, which the court ignored.

The judge said that Alexander was still relatively young, had good prospects for rehabilitation and showed genuine remorse, by cooperating fully with the prosecution and police and agreeing to testify against the co-accused.

Justice Cottle said that taking the aggravating and mitigating features into account, the starting point was lowered to 20 years.

The judge gave Alexander the full one-third discount for the guilty plea, noting that it had come after he had the benefit of counsel, and the delay was because of discussion between prosecution and defense.

Justice Cottle pointed out that the prosecution had noted Alexander’s cooperation and his agreement, in writing, to testify against Timm.

“Without this evidence, it is unlikely that a successful prosecution can be had against the prisoner or the co-accused,” the judge said.

“This fact weighs heavily in his favour,” Justice Cottle continued, adding that this amounts to exceptional circumstances, as outlined in the sentencing guidelines and allows a departure from the sentence.

He said that a further discount of two years was merited, leaving Alexander to serve 8 years, five months and 24 days as of April 1.

The judge noted that on Alexander’s release, he will still be a reasonably young man.

“I hope he will make the best use of the days the good Lord has given him,” Justice Cottle said.

At the end of the April 1 sentencing, Richardson told the court that the case was one for which a gag order would be most appropriate.

The judge ordered that no reports from the trial be published until the matter against Timm was disposed of.

He noted the importance of accused persons getting a fair trial before this court, adding that were a report to be published, it might have been difficult to find a juror who has not been affected by the remarks in court.

7 replies on “Mastermind jailed for 31 years, shooter gets 13 in ‘Precious’ murder case”