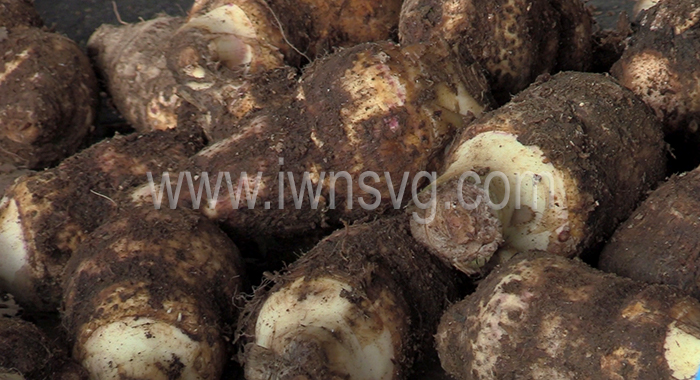 Dasheen being prepared for export in Kingstown on April 10. 2022.

Vincentian traders in agricultural produce to other Caribbean countries — known locally as “traffickers” — say that the government’s idea of re-establishing a marketing corporation can work.

However, the government must be ready to pay farmers more promptly for their produce than it has done for those it bought to put in its “Love Boxes” in 2020 and 2021.

Further, the traffickers say that the corporation would have to be staffed by people hired for their competency rather than their politics.

“I think what the government is trying to do might be something good if they’re paying cash. Because look at the Love Box, some people ‘til now nah geh no money for produce that they sell to the Love Box,” Judy Barker, whose family has been in the produce business for decades, told iWitness News.

“So I don’t know if this will be the same as the Love Box or if what they’re planning to do it might be better. But if it be better, well maybe we will get something more…”

“And if they pay better money than I have to go and send my goods to Trinidad, I will sell it to them. Once I know I get my money. And me nah want money two or three, four weeks after because when I go to farmers’ land, I pay them their money in cash.”

She suggested that should the idea work, there might be more cooperation among traffickers, thereby avoiding a situation where she said Trinidad is being flooded with Vincentian produce, resulting in lower prices for Vincentian produce.

“… So if they can get it work, hay! Hay!  It’s good because at least you might get some cooperation within this,” Glasgow said.

Prime Minister Ralph Gonsalves said recently that farmers in his constituency have complained about the prices that traffickers pay them for their produce.

“The traffickers, historically, have served St. Vincent and the Grenadines pretty well.

“But we have had, over the last several years, a trend where a number of traffickers taking advantage of the farmers,” Gonsalves said.

He said it is all well and good to say that the farmers must know which traffickers are honest, and those who deal with them fairly.

“But they were looking at an alternative proposition. And the people put it to me, I took it to Cabinet,” Gonsalves said.

He said that the proposal for a marketing corporation “has come up now with great urgency” because farmers are producing more fruits, vegetables, ground provisions, and spices.

Gonsalves said the idea is not to cut out traffickers, noting farmers’ freedom to trade with whom they wish and the fact that some traffickers are also farmers.

“But we have under investigation, working out some details, and we took the decision in cabinet four weeks ago to see if we can revitalise a marketing corporation but in a new period and of a different kind.

“So, I want the farmers to know that that is being explored. That is to say that the farmers and the government together will establish this particular facility.

“Not just the state alone, not just the government alone and which will purchase produce from the farmers and to make the arrangements for the export of those commodities.

The marketing corporation and its adjunct supermarket were closed soon after Gonsalves Unity Labour Party came to office in 2001.

Before coming to office, the ULP had complained that the New Democratic Party administration was exploiting the supermarket, but no one was charged nor any inquiry was held to determine what might have happened under the NDP’s stewardship.

In his recent comments, Gonsalves said that the supermarket had “deteriorated into more like a corner shop.

“And the marketing corporation was losing money. And they essentially closed it down. And the mantra was, let the farmers work with the traffickers”.

He said that when his government came to office “we sought to revive the Marketing Cooperation with the agricultural produce.

He said that farmers are “asking for the state to come back in with the marketing corporation, but we have to bring it back in a different way. That’s why we are putting it under serious study, serious analysis”.

Meanwhile, Roland Antoine, a farmer from Caesar’s South Central Windward constituency, told iWitness News that he was also in the produce business when the Marketing Corporation exited.

“… it needs some private people to run it.  Not because you vote for Labour and you know me, you going give me to run. It’s not going to work because who in there going to turn a big rat,” Antoine told iWitness News.

“Once you see money come in there, they going hustle that money out. Early, early they going knock out that money out. Three times down the road and the fourth time you hear they can’t pay… I see that happen already,” he told iWitness News.