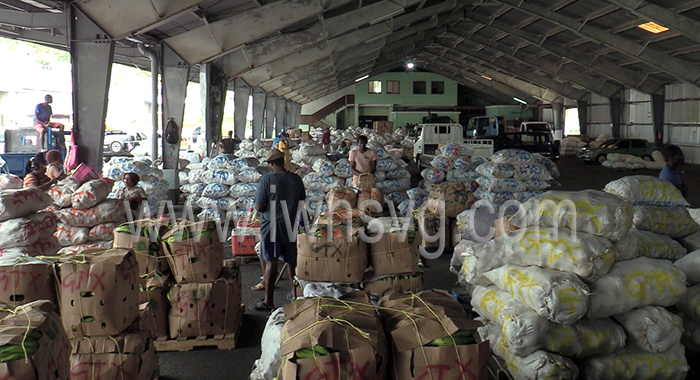 Traffickers prepare produce for export in Kingstown on Sunday, April 10, 2022.

Some Vincentian traders in agricultural produce across the region are not pleased with Prime Minister Ralph Gonsalves’ comment, earlier this month, that farmers are revolting against them over prices.

“… we have had, over the last several years, a trend where a number of traffickers taking advantage of the farmers,” Gonsalves said.

He said farmers in his constituency have complained about the prices that the traders, known locally as ‘traffickers” have been paying for produce.

Now, we are seeing the farmers revolting against the traffickers because of how too many of them behave in relation to the farmers,” Gonsalves said.

The prime minister said that the farmers have called for the re-establishment of a marketing corporation.

But the traffickers and farmers who spoke to iWitness News said that the prime minister should have gotten their side of the story before speaking about the farmers’ complaint on radio.

Jennifer Glasgow, a farmer and trafficker told iWitness News there are “two major hiccups, when it comes to trading in Trinidad”.

She said that Trinidad Market cannot absorb the vast quantity of produce that is exported from St. Vincent.

She believes that 75% of the produce exported from St. Vincent goes to Trinidad.

“Trinidad alone cannot take that vast amount of produce,” she said, adding that this results in lower prices.

“We have to sit back and wait and let them give us whatever they so desire,” Glasgow said.

She said that wholesalers in Port of Spain do not ask how much traffickers paid for produce in Kingstown.

“… they just do whatever they feel to do, which is wrong. We tried to complain; we tried to ask for help; nobody listened to us,” Glasgow told iWitness News.

Judy Barker, who took over from her mother, Isabel Barker, “one of the longest traffickers”, told iWitness News:

Barker told iWitness News that she pays farmers what other traffickers are also offering.

“But if they’re paying too much that I know I wouldn’t get a profit for, I wouldn’t buy it.

“…Look the other day we get TT$150 dollars for a sack of dasheen in Trinidad. That is like 50-something EC dollars… That week, we bought dasheen for $50.

“We lost because we have to pay the farmers and still end up and make up the money for the boat freight.”

Barker said that a few weeks ago, she did not order any dasheen because she thought it was unfair to pay farmers EC$30 or EC$40 for a sack of dasheen, even as she couldn’t afford to pay EC$50.

“So I did not buy any. I didn’t send any that week. I tell them they could hold on and leh we see if the price will go up. If not and they want to sell somebody else for that money, that is them, but I don’t go that low buying goods from any farmer because I know the expense.”

Glasgow told iWitness News that the cost of the produce is but one of the expenses in the intra-regional produce trade sector.

The traffickers and farmers told iWitness News that they pay EC$2 for each nylon sack in which the produce is exported as well as the cord with which to close them.

They have to pay between EC$85 and $100 for a package of a compound with which to treat the dasheen.

Transportation from the farm to their processing facility could cost EC$5 a sack then a further EC$5 to the export shed in Kingstown.

They also pay 50 cents to sew each bag of produce shut.

“… we cannot do anything different. And if the prime minister hears farmers complain to him, what I feel he need to do, come, sit down with traffickers and find out what is our problem. We need to voice our issues; we have a lot of issues too.

“… and I feel the Minister of Agriculture, they’re supposed to come and sit down with the traffickers and listen to what we have to say, before they run and say we’re ripping them off.”

Dexter Simmons, a farmer and trafficker, said he was concerned because the prime minister’s comment could make the nation think that traffickers are bad.

“… really and truly people know exactly that we’re the ones holding up the agriculture sector.”

He said that traffickers are going through a bad patch and things could have been better “but we can’t do nothing because the situation right where we shipping, we have no power over it, which the prime Minister knows that and the agriculture minister knows that…”

“ but they don’t really want to come forward and say anything because everything is politics.

“I ain’t a politics person. You can’t play politics with your job. This is my job. This is my living. I was surprised and that is the reason I came forward and talked,” he told iWitness News.

“…  the Prime Minister really — I am kind of disappointed in him, which is someone who is highly respected by all the traffickers,” Simmons said.

He said the prime minister should have consulted with traffickers before speaking publicly.

“… he would have heard exactly what the problem is. And whosoever not paying farmers, then you could have come forward and say something about it and talk to the person or relate to that person say whatsoever — straighten it up.

And, Glasgow said that while she was growing up, her parents sold their produce to traffickers.

“And this has been going on for [an] amount of years, simply because the government don’t have no market otherwise to help the farmers. We are the ones that help the farmers,” Glasgow told iWitness News.

“We are the ones who actually put money every week in farmers’ pockets. In everything, you find some bad apples; I’m not saying that they are not some bad apples within the trafficking thing.”

She said that 75% of traffickers are honest and a lot of them pay cash for their goods.

“When I go to the farmers’ land, I pay them their money. But you have a lot of people who don’t do that, because they cannot afford to do that. So you have a few bad apples within it. But you cannot blame all the traffickers for something that one or two are doing.”

Glasgow said it would help if the Ministry of Agriculture in Kingstown helps to negotiate with wholesalers who buy the produce when it arrives in Port of Spain.

“Everybody’s saying, traffickers ah mek money. It’s not the point that I’m making money, is a point that you’re trying to make a living. And if we don’t do anything, the goods are going to stay there and spoil.”