Leacock urges N. Leeward to rise up like Layou against quarry 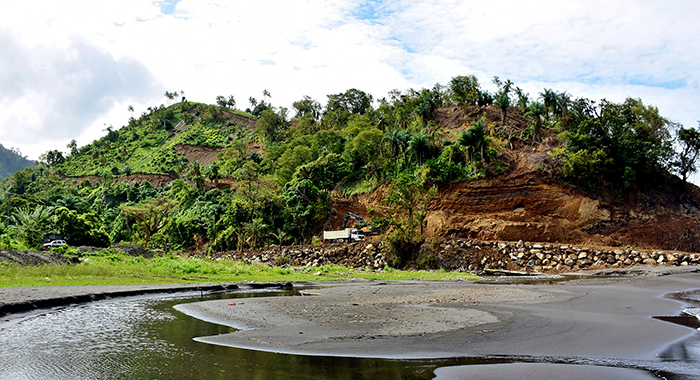 The quarry site in Richmond on March 11, 2022. (Photo: Lance Neverson/Facebook)

Central Kingstown MP, St. Clair Leacock has called on Fitz Hughes residents to bring to an end the “ill-conceived” quarry in Richmond, telling them no amount of money can pay for their health.

The government has leased 59 acres of the headland between Fitz Hughes and Richmond to a St. Lucian company for the operation of a quarry for 30 years.

Leacock said that the project is “corrupt from the beginning in its intent”.

“… don’t surrender good health for a little wealth because when the sickness catches up with you, no amount of money is going to look after you”, he told a community meeting held by his New Democratic Party in Fitz Hughes.

“If you disrupt the soil and the wind is blowing from the sea to the land, and the dust is suspended, it must land somewhere,” he said, repeating a point made by South Leeward MP Nigel “Nature” Stephenson at the same meeting.

“And it will land in your nostrils, in your mouth, in your eyes, and into your stomach. And those of you who have respiratory disorders, be it asthma, or whatever form, will be the worst for it.”

He said that residents will “begin to understand the inconveniences that you will have to put up with for just a little more”, referring to the revenue that the government will receive from the quarry.

“… the blasting, they will have to close off the road, they will not allow you to come around there.

“It’s not speaking any untruths to say your house will be cracked. And all sorts of things will happen.

“But I’m saying to you, the people of Fitz Hughes, good decent people who know of struggle and suffering, that there’s nothing that separates you from the people of Central Leeward, specifically, the people of Layou.”

He was referring to the protest that Layou residents mounted after a quarry operator in that town applied for permission to construct a jetty, the third, in the community.

Days after the protest, Prime Minister Ralph Gonsalves announced that the Planning Board had rejected the application.

“Friday don’t have to come here to make sense out of you, or Patel,” he said, referring to NDP President and Opposition Leader, Godwin Friday and former North Leeward MP, Roland “Patel” Matthews.

“It is time you put your foot down in Fitz Hughes and in North Leeward; be a man, be a woman; be a young person for the future,” Leacock said.

“… the New Democratic Party hasn’t come here tonight to say that we are stopping it because it advances our political interests. When we propose that, we will come another day when the agenda is different, to show you in crystal clear terms, how we have a better way for the people of Fitz Hughes,” Leacock said.

“So you’re not going to lose a cent over the New Democratic Party because we’ll make sure just as how so many ah them say that they’re there to eat ah bread, you all need to eat bread but you have something in the bread.”

One reply on “Leacock urges N. Leeward to rise up like Layou against quarry”