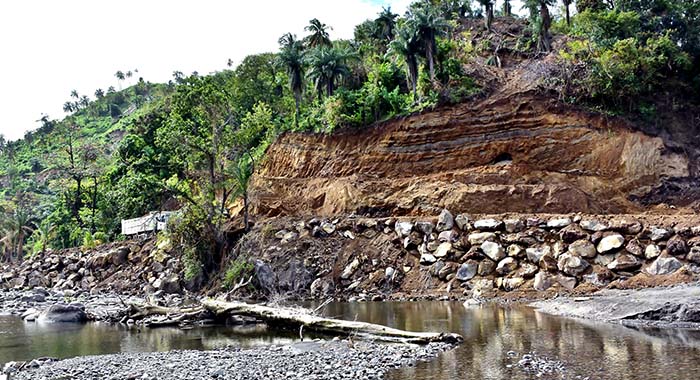 The quarry site at RIchmond on March 11, 2022. (Photo: Lance Neverson/Facebook)

An opposition MP is questioning the government’s decision to lease lands to a private firm to mine stones in Richmond when the government is about to spend millions of dollars on stone to build an EC$600 million harbour in Kingstown.

Central Kingstown MP St. Clair Leacock also noted that there was no mention of the quarry project in the campaign for the November 2020 general election, in which the ruling Unity Labour Party (ULP) won the North Leeward seat by a single vote – after a series of controversial recounts.

“Not once did a government that badly wants to win a seat say to you, they were going to have mining at that place; not once,” Leacock told a community meeting organised this month in Fitz Hughes by the opposition New Democratic Party (NDP), of which he is a vice-president.

“And if, as they are trying to impress upon you now, they were so convinced, they would have put the argument before you in their manifesto, in their words and in their deeds, to help and secure this constituency. But it was withheld and withheld for good reason.”

While the ULP did not mention the quarry on its platforms or in any of its speeches, it is listed in its manifesto.

In the manifesto, the party listed the quarry under the “large strategic policies and programmes are on offer by the ULP to Lift SVG Higher”.

“Building-out, in conjunction with a private sector entity, a quarry in North Leeward. This is vital for private and public construction, including roads.”

Leacock said that the environmental management plan for the quarry says it will benefit the construction of the new port in Kingstown, as well as other government projects and private sector projects.

“And when they look at the project in Kingstown, the deep-water pier, which they have estimated to be as high as $600 million dollars and they know that you’re going to need a hell of a lot of stone…

“They know those stones have to be secured; it has to be bought, it has to be paid for and that in itself is going to be amounting to millions of dollars.

“And perhaps, just perhaps the temptation was too great as some of them looked around and saw that their days in politics was coming to an end and so they said, ‘A lot of money dey in big stone and the time to move and secure that is now. So said; so done.”

MP for North Leeward Carlos James, in his attempt to reassure residents that the quarry would not have a negative impact on their lives, said that he had visited Rayneau’s quarry in St. Lucia unannounced and was impressed with what he saw there.

“Ask him why did he feel compelled to take his own money to go to St. Lucia, to see what was happening there and to come back here, and to say all is well, all clear, let’s proceed…

Leacock said it is not easy when money is dangled before someone who has utility bills or medical bills to pay or children to take care of and educate.

“And right is right and wrong is wrong. And you could never ever be too poor to say, ‘You see that thing, that spells disaster for me, my children and for generations unborn.”

He urged listeners to think about what South Leeward MP, Nigel “Nature” Stephenson said at the same meeting.

“A government is going to give a man those lands for 30 years.  … he (the operator of the quarry) will make money for the next 30 years,” Leacock said, noting that the farmers who occupied the lands would only be compensated for their existing crops.

“But in the same way he is going to benefit from it for 30 years, if you are going to lose from your land, from your fishing, from whatever the hell you’re doing, you, too, should be compensated for 30 years.

But in the first instance, they were never concerned about that.”

He noted that a tonne of stone is sold for around $70.

“Imagine they’re going to take your stone, sell it for $70… and in return give you a penny — two cents — out of $70. What the hell you’re going do with two cents out of $70? Something ain’t radically, fundamentally wrong with that?”

The quarry operator will pay the government EC$12,000 annually for the lease and EC$2 on each tonne of aggregate that it produces.

Further, it will sell the government aggregates at an 8% discount.

Leacock asked the meeting to consider that the stone that will be quarried belongs to the country.

“So you can sell to me and tell me that you want stone to build a wharf in town; you can call a man from St. Lucia, give him the stone and buy back your stone from him to full up your wharf?

“… You ain’t bring them from St Lucia. But you going to take your stone give it to him and buy it from him. Well, I have to be a nincompoop. I have never heard some guinea hen bring ram goat story like that in my life. Who the hell they talking to? It’s got to be the joke of the century.

“They are dishonest to the core and taking you for a ride.”

Leacock noted the NDP’s proposal of a constituency development fund.

“It means that everybody who wants to represent you must understand that there must be money put aside expressly for you and your constituency,” he said.

“There is something in this project that also has a similarity to the people in the Grenadines because nowhere in the development of this … project that will reach into the amount of billions of dollars … do you get a sense or has it been indicated to you, Fitz Hughes, you Richmond, you Chateau, you Peto,  you Spring Village, you the surroundings that as a consequence of things coming from your community, a portion of money will be put aside specifically, directly, expressly for you the people.”

He said that the revenue that the quarry generated will all end up in the Consolidated Fund.

“They would send it to Kingstown, one big pot and you don’t even have a guarantee that as a consequence, you who live ya will be a beneficiary of something that came from ya.”

He said this could not be right.

“… you understand now why in the general election that went, come hell or high water, Patel wasn’t to be allowed to win this seat,” Leacock said, referring to the NDP Roland “Patel” Matthews, who lost the North Leeward seat by a single vote after two five-year terms.

“Because if he only won this seat, and the NDP went back into government, … this thing will not come off. So they had to do everything, all, in their powers to keep Pato out of this constituency.”