Protesters use royal visit to call for reparations 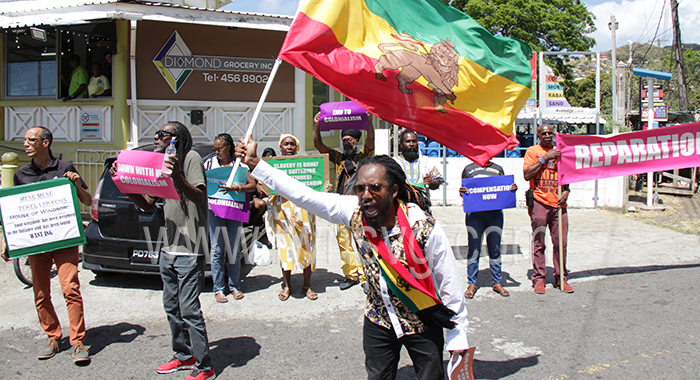 Protesters used the royal visit on Saturday, April 23, 2022, to call for reparations for the slave trade.

The Government of St. Vincent and the Grenadines, on Saturday, rolled out the red carpet in welcome to the British Monarchy, even as a small group of protesters registered their objection to the visit and called for reparation for African slavery.

At Argyle International Airport, The Earl and Countess of Wessex — Prince Edward, 58, and his wife, Sophie, 57 — were greeted by Montgomery Daniel, acting prime minister, who is of Garifuna descent.

Also welcoming the Wessexes was Opposition Leader Godwin Friday and other government and opposition lawmakers.

Prime Minister Ralph Gonsalves, who feted Princes William and Harry during a visit in 2016, missed this year’s tour — in celebration of the 70th anniversary of the reign of Queen Elizabeth II — as he was receiving medical attention in Venezuela.

While the sound of steel pan welcomed the royals outside the airport, it was chants of “Reparations now!” that rang out in Diamond, where Prince Edward watched races among athletes preparing for the Commonwealth Games, to be held in Birmingham this summer.

The small group of protesters said Britain should pay for its role in the African slave trade.

She said that while some people might not agree, “we know what our forefathers went through; it’s in our DNA.

“We feel their pain and every time I talk about African brothers and sisters who had to struggle for survival in these ships and work for many years — 400 years of slavery — and still up to this day, we are not compensated.”

Jackson noted that at the end of the slave trade, it was the slave masters, rather than the slaves who were compensated.

“I am here to demonstrate, to show my disgust, my disappointment, my vengeance for my bothers and sisters … who, over 400 years had to suffer the slave masters’ whip, the slave masters’ rape and  brutal dehumanisation of our people.  So I am here to stand up for those persons and seek from Britain reparations now.”

She said some people might argue that slavery was legal and permitted when it occurred.

“Our African brothers and sisters were never permitted to be enslaved. So the wrong was done against a sector of the human race by another and this wrong must be compensated.”

Jomo Thomas, a former chair of the national reparations committee, was among the protesters.

“We just wanted to indicate, represent, manifest our disgust, our disdain and our concern that the neo-colonial government of St. Vincent and the Grenadines would again, yet again, be welcoming and celebrating these people,” said Thomas, a former government senator and Speaker of the House of Assembly

He said that under the Royal African Charter, the British were “responsible for the hunting down, kidnapping and transshipment of 60% of all of the Africans who were taken from the African continent”.

Thomas noted that for hundreds of years, Europeans forced Africans to work without pay.

“… they owe us and they must now pay us, as this sign is indicating,” he said, referring to the large “Reparations now” banner that he and another protester were holding.

“… this is not so much for the colonials who are coming in but to raise the consciousness of our people, that the call for reparation is a just cause and a just demand and we will fight until we achieve that.”

In London and other European capitals that had colonised in the Caribbean, governments have dismissed the reparations call, saying that current generations should not be held responsible for acts committed by their forebears.

Thomas, however, said that it was only in 2015 that the British government finished repaying the 20 million pounds it borrowed in 1831 to compensate slave owners in preparation for the end of slavery.

“So if they finished paying in 2015, the argument that slavery is remote is nonsensical, it is farcical,” said Thomas, a lawyer and newspaper columnist.

“Slavery is alive and well. It is alive and well in the underdevelopment of our people; in the fact that so many of our people are captured by a neo-colonial European mind-set and we can only emancipate ourselves from mental slavery if we understand that the struggle for reparation is an integral part of freeing ourselves, or regaining our patrimony.”

“When we say reparation, it’s not just money. We want repair for all of the damage that has been done to our people in all the areas of human activity: economics, education, entertainment, religion, sex, war, politics, labour.

“The earth is suffering; people are suffering. This is what you all have done. The damage, we want it repaired. This is what this stands for,” he said, referring to the slogan on his placard.”

Theo Thomas, 69, of Lowmans Hill, saw the royal visit as the government joining in the exploitation of the people.

“I came out here because it’s a shame that a so-called progressive government would be using our people as props to entertain members of the Royal Family and there has been no conversation about reparations,” said Thomas who travelled 11 miles from the western side of St. Vincent to the protest site.

“The Royal Family is in the position where they are today because of the pillage of our country and the enslavement of our ancestors,” he said.

He noted that Grenada had rejected the royal visit, and speculated that the real reason was because of the demands for reparations there.

SVG is a constitutional monarchy, with the queen as the ceremonial head of state, represented by the Governor General, Dame Susan Dougan.

Dougan was the first to be introduced to Prince Edward and Sophie at the airport on Saturday.

The British Monarch continues to be the head of state in SVG because in 2009, electors voted in a referendum to keep the British monarch.

But Jomo Thomas cautioned against using this as an indication of support for the monarchy.

Political observers have said that the constitutional reform vote 13 years ago was a referendum on the Ralph Gonsalves administration and electors might have voted differently, if given a chance to vote on individual elements of the Constitution.

Thomas, who in 2009 campaigned in support of the changes to the Constitution, echoed this view on Saturday

“… if you lock yourself into a political conversation, you may want to listen to the foolishness that is presented a lot of time by the Unity Labour Party administration and their supporters that we had a chance [to vote on whether to keep the monarchy].

“So many other things were involved in that reform — things that people voted against. If the vote only had to do with the monarchy, maybe people would have voted ‘yes’.  There was a whole package and people rejected the package,” he said.

He, however, noted that 43% of the voters supported the proposed changes to the Constitution.

During their visit, Sophie spoke to women in leadership roles about the community’s response to the April 2021 eruption of La Soufriere volcano.

The Wessexes congratulated those who have recently completed their Gold Duke of Edinburgh’s Award and watched part of a 10-10 cricket match.

They planted a tree at the Botanical Gardens in Kingstown, the oldest in the Western Hemisphere, and met privately with the acting prime minister.

Correction: An earlier version of this piece mentioned Prince Andrew. It was actually Prince Edward that visited St. Vincent and the Grenadines on April 23, 2022.

4 replies on “Protesters use royal visit to call for reparations”