Unique opportunity for young Vincies to study in Isle of Man 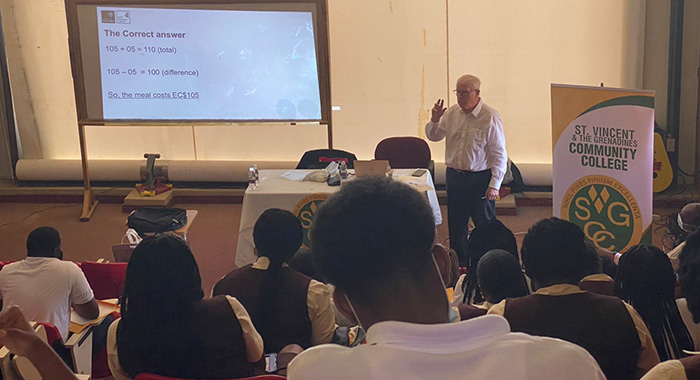 Professor Tim Cullen teaches a session on negotiations at the SVGCC in March.

Young Vincentians are being presented with a unique opportunity to pursue fully-funded tertiary education at Kings William’s College in the Isle of Man, starting from 2023.

The scholarships are being offered under the “Isle of Man–St Vincent and the Grenadines Education Programme” (ISEP).

ISEP’s inaugural programme is scheduled to take place in this August and offers an exceptional opportunity for six girls and six boys of school-leaving age (plus two chaperones), to spend three weeks in the Isle of Man.

In March, 37 students at the Community College got an insight into the quality of the education they would receive in under the programme, were introduced to the fundamentals of how to become effective negotiators.

The lively half-day session was a compressed version of the renowned five-day Oxford Programme on negotiation for senior executives at Oxford University’s Saïd Business School.

Professor Tim Cullen, who founded the Oxford programme two decades ago, and is widely recognised in the field, having taught negotiation all over the world, taught the class.

“We negotiate every day of our lives and so it is an essential skill, requiring empathy, self-awareness, and a knowledge of psychological biases,” Cullen said. “I really enjoyed interacting with the very bright students from the College and I hope that they took away some useful lessons in the short time we were together.”

Cullen, who is the former chief spokesman of the World Bank, is also the founder of the Small Countries Financial Management Centre and Programme, an international charity based in the Isle of Man, which, since 2009, has offered an annual executive programme to officials in small countries, including SVG.

The objective of this programme is to enhance the management and leadership capacity of small states, recognising that this can play a key role in a country’s overall economic development.

So far, 14 senior officials from SVG have attended this two-week financial management programme at no cost, at Oxford University and in the Isle of Man, and have been taught by educators of the highest calibre.

Sharda Bollers, a Vincentian citizen and former director of the FSA and the FIU, attended the inaugural programme in 2009 and retained contact with Cullen through the directorships they both hold on the board of the Small Countries Financial Management Centre.

When he learned of the havoc wreaked upon SVG by the volcanic eruptions of April 2022, Cullen was especially moved by the plight of students who were displaced by the use of their schools as shelters, while having simultaneously to deal with the effects of the coronavirus pandemic.

“We believe ISEP offers a unique and diverse experience which will benefit young people in their personal, educational and social development at a pivotal transitional stage of their lives,” said Bollers, who, along with Lavinia Gunn, will be a director of the new charity.

Gunn, a Vincentian citizen and former teacher and business entrepreneur, has a long track record with charitable causes and lived for several years in the Isle of Man as a schoolgirl.

The programme will be fully funded by private donations to the new charity and embodies the theme of the “Art of the Possible” which propounds that the opportunities are endless for young people, no matter what their personal circumstances may be.

The programme targets candidates with a combination of academic achievement and all-round good citizenship and will include students who have been evacuated from the volcano zone, as well as students from other parts of SVG.

Cullen taught the class in appreciation to the Community College and its Director, Nigel Scott, for their key role in identifying the students who will go to the Isle of Man.

“I believe this presents a unique educational opportunity for young Vincentians, which will, at the same time, strengthen links between the island nations of the Isle of Man and St. Vincent and the Grenadines, and open valuable opportunities to the world at large for the country’s youth” Professor Cullen said.

“During my short visit, I was immensely encouraged by the positive response the ISEP initiative has received from Government leaders who have placed the highest priority on secondary education for more than two decades,” he added.