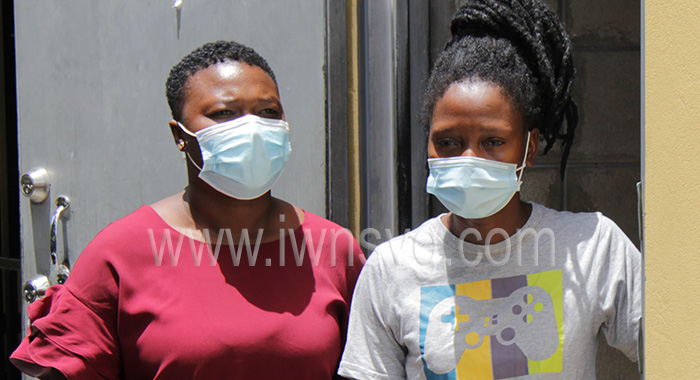 A plainclothes police officer escorts the defendant, Zepporah John, right, from the Serious Offences Court on Thursday, May 2, 2022.

Zipporah John, the woman nabbed with 38,707 grammes (38.7kgs) of cocaine in a barrel inside her house in Union Island on April 25, will have to wait until Monday to know her fate.

John was slated to be sentenced today (Thursday) at the Serious Offences Court in Kingstown, one week after pleading guilty to drug possession and trafficking charges.

On April 28, her lawyer, Grant Connell asked the court to impose a suspended prison sentence on the 32-year-old mother of three children, aged 3, 10, and 14.

Prosecutor, Station Sergeant of Police Renwick Cato, noted that Connell had said that John was of limited means.

He further pointed out that if a fine is imposed, the maximum alternative prison sentence is one year.

Cato asked the court to consider the message that its sentence would send to the public.

Chief Magistrate Rechanne had deferred her sentencing to today.

However, when the matter was called, Connell told the court that he did not mention last week “the possibility, small as it may be, of her family’s ability to pay a fine”.

He said he had a duty to mention to the court that John’s family was willing to provide whatever financing they can in the event that a fine is imposed.

He asked the court to entertain this, although he had mentioned that John’s family is of little means.

Asked to respond, Cato told the court that he was standing by his submissions of a week earlier.

“I will not respond,” he told the court.

The chief magistrate said that the court had considered a sentence already, but to be fair, would consider the counsel’s latest submission.

Browne said that certainly the quantity and nature of the drug had not escaped Connell.

“I think this may have caused his submissions to be made in the way they were made,” Browne said, adding that if guided by previous cases, Connell would have seen the types of fines imposed in similar cases over the past few weeks.

Browne said that considering the maximum fine that the court can impose and the significant value of the before the court, she would take the opportunity to consider his submissions and hand down the sentence on Monday.

At this point, Connell rose and said in light of the time the court would need, “given the flood of cocaine, 50-odd and 30-odd [kilograms]”, given the factual matrix in the case and John status, and “to be abundantly safe”, he did not hear mentioned in the facts that the police had carried out a field test on the substance, contrary to their usual practice.

He asked the court about the possibility of a field test being done.

The court, however, said that Connell was aware of the implications of a guilty plea.

“So we will not even go there. Next week Monday, May 9th,” Browne said.

The magistrate then ordered the defendant to stand down.

“There is never a dull moment,” Browne said.

Connell noted that the sentence has not been passed.

“Yes, but you are aware of the ramifications of a guilty plea so we will not go there, counsel,” the chief magistrate responded,” she said.

John, who has been in custody since her arrest, was further remanded, pending sentencing.