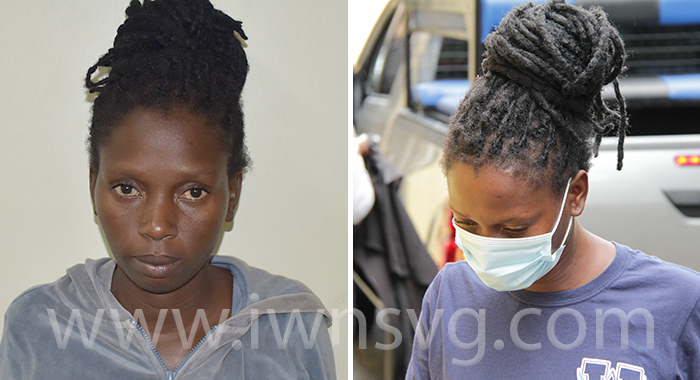 The lawyer for the woman nabbed in Union Island on Monday with 38,707 grammes (38.7kgs) of cocaine in a barrel inside her house has asked the court not to jail her.

The drug has a street value of EC$1.13 million.

Grant Connell told the Serious Offences Court, on Thursday, that his client, Zepporah John, 32, should be handed a suspended sentence.

However, prosecutor Station Sergeant of Police Renrick Cato asked Chief Magistrate Rechanne Browne to impose a custodial sentence, noting that just a few weeks ago, she fined another of Connell’s clients EC$68,000 for possession of 4kgs of cocaine and possession for the purpose of drug trafficking.

The prosecutor noted that Connell had suggested that John, a housekeeper of Asthon, Union island, originally of Barrouallie, is of limited means.

Cato noted to the court that the maximum alternative sentence for any fine imposed by the court is one year in prison.

Browne adjourned the sentencing to next Thursday, May 5, to allow her time to consider her sentence.

On Wednesday, at the same court, John pleaded guilty to charges that on April 25, at Union Island, she had the drug in her possession, and that she had it for the purpose of drug trafficking.

The hearing of the facts and sentencing was adjourned to Thursday.

In presenting the facts, on Thursday, Sergeant 172 Ash told the court that on Monday, April 25, about 7:50 p.m., acting on information, Corporal 771 Bowens headed a party of Rapid Response Unit (RRU) officers to John’s home to execute a search warrant.

During the search, Bowens asked John if she had anything illegal to declare and John said, “Ah how you all find me?” and told the officer, “Search.”

While searching in the house “which is an open area”, Bowens saw a blue barrel, with a grey cover next to John’s bed.

Bowens opened the barrel and saw two white and orange and blue buoys inside.

He cut the buoys open in the presence of the defendant and Durrant.

Bowens immediately cautioned John, who replied, “Ah Blackie from Bagga give me to hold.”

The officer continued the search of the barrel and the house but nothing else illegal was found.

At the Ashton Police Station, the packages were counted and drug weighed in John’s presence and they amounted to 35 packages and 38,707 grammes.

‘raw expression of an innocent woman’

In mitigation, Connell told the court that John has three children, ages 3, 10, and 14, having quit secondary school at form 4 when she became pregnant.

He said she has no previous conviction, was extremely remorseful and pleaded guilty at the first opportunity.

The lawyer said that the aggravating feature of the offence was the sophisticated nature of the concealment and the fact that it was cocaine — “a wretched drug”.

Connell said that mitigating was John’s mistaken belief regarding the type of the drug, taking into account “the reasonableness of such belief”.

He said that she is of good characters, expressed genuine remorse and assisted the police

His client, the lawyer told the court, is “a good citizen who was simply used by others to stash” the cocaine.

The lawyer read to the court his client’s account of what happened.

He quoted her as saying, in dialect, that she was at home the morning and her friend brought some sacks “and some things by me” and told her another friend’s boat had broken down on the way to Grenada.

She said the police came later in the day, saying they wanted to search for cocaine and guns, but she told them she did not have either and they could search.

Connell said that when the police arrived, John told them that the packages were in the barrel and recounted what the men had told her.

“They (police) pull out the thing them, black square thing with some donkey face thing pon them,” Connell quoted John as saying.

According to the lawyer, John said that it was the police who told her it was cocaine.

“If me been know is that thing dey, me wouldna tek but the boat thing them been like when dem dey pon sea. Me real sorry. Me ain’t in dem thing dey; me don’t use them thing they; me never in them thing dey before.’

“What you have heard there is the raw expression of an innocent woman who was asked to hold a small portion of weed — locally grown.

“That, too, was illegal but the difference is when an angel is by your door and the devil himself, you welcome one in and the other you would have closed off had you known.”

He asked how the woman was to know it was cocaine rather than marijuana, adding that if anyone at the bar table or the magistrate were given the buoys, they would not have known the content.

The lawyer said this is why the sentencing guideline that speaks to mistaken belief about the type of drug is important.

He said that a marijuana run between St. Vincent and Grenada was “run-of-the-mill”.

“Cannabis is to St. Vincent as rice is to China,” the lawyer told court, adding that St. Vincent was at the point where a local company might have cannabis on its shelves to sell.

He said it was not until the police cut open the buoya, something for which he gave Bowens’ credit, that John, and the police, knew that they contained cocaine.

The lawyer said that an appropriate sentence can be passed without incarcerating John as she is no danger to the public and does not have a history of non-compliance with court orders.

Connell said that John has a realistic prospect of rehabilitation.

“There is actually nothing to rehabilitate. A good, honest hardworking Vincentian…” he said, adding that John has every possible mitigation factor in her favour.

The lawyer said that John’s 3-year-old child would suffer, adding that her 14-year-old is three years away from the hurdle at which she fell in secondary school.

“This is why it is important that people like her do not serve a custodial sentence.  What it may do is cause the young children to look at the hurdle before them and because of Mommy going to jail, will not be able to cross that hurdle,” Connell told the court.

Connell said that 38kgs of cocaine is no small amount, but the nexus to John did not warrant a custodial sentence.

He said that from his calculation, her sentence would amount to 3 years seven months in prison.

Connell said that if the court was minded to jail John he was asking that the sentence be suspended, as her culpability is minimal.

“Many would say, ‘Watch how much cocaine’, but each case must be dealt with on its own merit,” he said, adding that he was certain that if John is given a suspended sentence she would “continue on the straight and narrow…

“She is no criminal. You can look at her and see her heart beating out of her chest.”

However, in his representation on sentencing, Cato told the court that he had listened to the statement that Connell read on behalf of his client.

“My concern … is that according to her, they asked her to hold them until in the morning. The police went there minutes to 8.

“They told her a boat was malfunctioning. She called a name but none of what was said in the statement except that Blackie gave it to her, was communicated to the police.”

Cato noted John’s right to remain silent, but said if the incident happened as Connell said and John was deceived, “Why would there be a cover as to where is this boat?

“Because the same day, boat malfunctioning. And if the boat is malfunctioning, it means the boat is on land, because the police found the drug by her. That was not communicated to the investigator. That could have been sorted there and then by competent Corporal Bowens.”

Cato noted the recent case involving 4kgs of cocaine and the fine handed down by the court.

The prosecutor noted that the court could impose sentences of up to seven years in prison and fines of up to EC$500,000.

Cato said he was hoping to hear Connell comment on John’s ability to pay, adding that it seems that she has little means.

He said that John has not previous conviction and pleaded guilty at the first opportunity and, based on the sentencing guidelines, generally such a person would not receive a custodial sentence.

“But in the same sentencing guidelines, these judges also suggested that the court … can depart from the guidelines in exceptional circumstances.”

He noted that if John is fined, regardless of the amount, the alternative sentence would be a maximum of one year in prison.

Regarding a suspended sentence, Cato asked what message the court would be sending to people involved in the cocaine trade.

He said that a custodial sentence is appropriate in the case, given that John’s lawyer said that she is of little means and has three children to care for.

“There is no means to pay a fine that is even one-tenth, not even one-fifth of the value of the substance that is before the court.”

‘I want to carefully consider all factors’

Responding to questions from the chief magistrate, Connell said that John’s 14-year-old son, who is in form 3, has been living with his paternal grandfather in northwestern St. Vincent since he was 3.

The 10-year-old son lives with his father in north-western St. Vincent and is in grade 5.

The 3-year-old boy lives in the Grenadines, where his father also lives. The father, however, does not support the child, the lawyer told the court.

He said that the “Blackie” that John had mentioned to the police is not any of her children’s fathers.

The chief magistrate said that 38,707 grammes of cocaine was “not a drop-in-the-bucket amount”

She noted Cato’s reference to the recent cocaine case, adding that when the weight is considered, on the face of it, John’s offences will attract “a substantial figure and or a substantial custodial sentence”.

Regarding a custodial sentence, Browne said that the court could only suspend up to a certain number of years.

“These are very serious offences and I wouldn’t want to rush a sentence. I want to carefully consider all factors so that the objectives of sentencing are met and the sentencing guidelines applied so that the sentence will be reflective of the appropriate punishment,” the chief magistrate said.