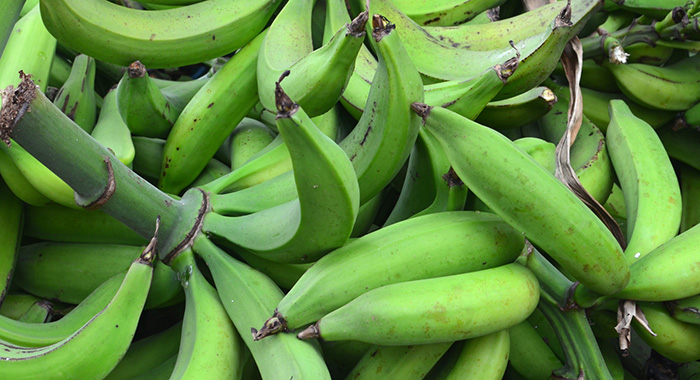 A Georgetown man who said he stole a bunch of green plantains to feed to his cousin’s pig has until May 25 to pay EC$30 in compensation to avoid one month in jail.

The man, Angus “Sinsayman” Guy, pleaded guilty at the Georgetown Magistrate’s Court to a charge that on March 4, at Georgetown, he stole one bunch of full, green plantains, valued at EC$30, the property of George Sam, of Chilli.

Presenting the facts, prosecutor Corporal Delando Charles told the court that Sam’s farm is located opposite his home and the defendant frequently steals from the farm.

Sam has repeatedly warned the defendant against such practice.

On the day in question, Sam was at home when he heard someone saying, “Sinsayman, leave the man plantain!”

Sam went to his farm, retrieved the plantain from the defendant and took it to the Georgetown Police Station.

Guy told the court he was rearing a pig for his cousin “and the food was right there.

“The plantain had fall down so me take it and carry it for the hog,” he told the court.

In handing down his sentence, Magistrate Bertie Pompey pointed out that in 2018, Guy was reprimanded and discharged on a similar theft charge.

He ordered the defendant to pay EC$30 in compensation.

“Please give me a little time to pay. I have no money right now,” Guy told the magistrate.

“If you continue like this you will end up in prison,” Pompey said.

“But, if you come back before me, you hear me, I’ll send you to prison,’ Pompey said.

“Whenever temptation arises and you want to steal, you must remember that I say if you come back here to this court before me, you will go to prison. Remember that,! the magistrate told the defendant.