Ring around the sun is a ‘halo’ – Met Services 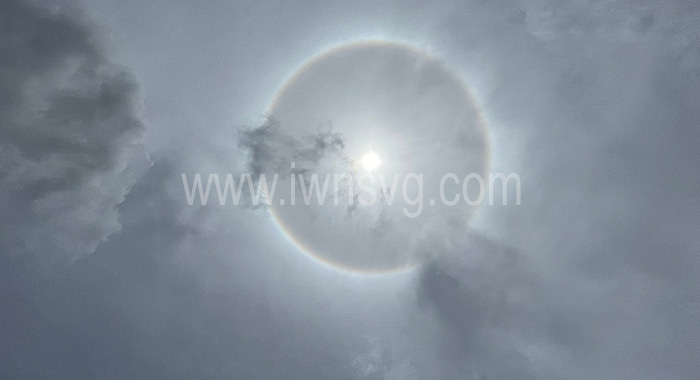 The ring around the sun that has generated interest across St. Vincent and the Grenadines is a “halo”, the SVG Meteorological Service tells iWitness News.

“There are thin cirrus clouds drifting high above your head and they form some tiny crystals in the earth’s atmosphere and this is what creates the halo,” forecaster Desiree Neverson Jack told iWitness News shortly after noon on Saturday.

“They surround the sun and even the moon,” the forecaster further said, adding that the phenomenon does not affect the weather.

Neverson Jack said the phenomenon is generated by mid to upper level instability that is expected to affect St. Vincent throughout the weekend.

“The mid- to upper-level instability will linger around for the weekend. However, how conducive it will be to sustaining the halo, I cannot give a definite answer,” Neverson Jack said.

“The cirrus cloud will be around for the weekend but the refraction that is taking place, if it will continue for the weekend, I cannot say,” she added.

In its midday forecast, the Met Services said the weather will be “generally cloudy with some isolated showers” through to 6 p.m., when the next bulletin is expected.