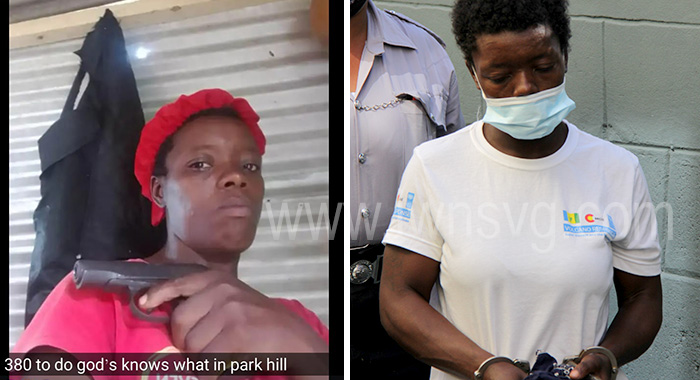 Jemelia Bailey in the Facebook post, left, and as she arrived at the Serious Offences Court on Monday, May 9, 2022.

A Park Hill duo were on Monday jailed for 38 months for possession of an unlicensed firearm, two days after a Facebook post of one of them posing with the weapon.

Jemelia “Gaza” Bailey, 29, a farmer, and Glendon De Freitas, 28, a labourer, pleaded guilty at the Serious Offences Court to a joint charge that on May 7, at Park Hill, they had in their possession one .380 pistol, serial number unknown, without a license issued under the Firearms Act.

In handing down her sentence, Chief Magistrate Rechanne Browne noted that the Facebook post included the words, “380 to do god’s knows what in park hill”.

Browne said the quotation showed an intention to cause harm, and, in keeping with the sentencing guidelines, the court viewed the seriousness of the offence as high.

The court established a starting sentence of 53 months, saying that the prevalence of firearm offences in St. Vincent and the Grenadines was an aggravating feature of the offence.

“The police recently said this is a problem,” Browne told the defendants.

“You are living in St. Vincent and the Grenadines. I believe you know of the problem. There is a problem in Park Hill — elsewhere,” she said and noted the three shooting deaths in the country the previous weekend.

She said the fact that the post appeared on social media no doubt created alarm and panic, adding that she was certain that there was some alarm in Park Hill.

After considering the aggravating and mitigating features of the case, the magistrate added eight months to the sentence.

She deducted four months, as it was the defendant’s first offence, Bailey had dependent children and De Freitas said his girlfriend was pregnant.

The chief magistrate also applied the one-third discount for the guilty plea, leaving a sentence of 38 months.

She informed the defendants of their right to appeal and ordered that the firearm be confiscated.

In presenting the facts, prosecutor Station Sergeant of Police Renrick Cato told the court that on Saturday, May 7, about 5 p.m., Sergeant 523 Collin Pitt, stationed at Colonaire Police Station, saw a post on Facebook with Bailey holding what appeared to be a firearm across her chest area.

The post included the words “380 to do god’s knows what in park hill”.

As a result, Pitt headed a party of police officers to Bailey’s home in Park Hill, where the warrant was shown and read to her.

She consented to the search and the police found the firearm in a basket of clothing in a storeroom.

Bailey, under caution, told police the gun belongs to the defendant, De Freitas.

De Freitas was met in the yard also and police also cautioned him and he said, “The gun belongs to me.”

Bailey and De Freitas were arrested and charged.

“What I must highlight is that on the post on Facebook, as the calibre, it has .380 and when examined by the gazetted ballistic expert, it is, in fact, .380,” Cato told the court.

The prosecutor asked that Pitt read the caution statement Bailey gave to him.

In the statement, Bailey said she has known De Freitas for about 15 years. They are friends and usually “lime” at her boyfriend’s house.

She said she went to the shop Saturday morning to buy detergent and when she returned, she met De Freitas sitting in the yard.

Bailey went to wash and felt something heavy when she took out the pants and sheets.

She saw a gun and called De Freitas and asked him if it belonged to him.

De Freitas told Bailey he had already suspected that she had called him to ask about the gun.

Bailey told the police she took a picture with the gun with her phone and told De Freitas that the gun is trouble.

She said that when she had the gun, De Freitas also took a picture of it.

Bailey said that later that day, a friend came by and showed her the photo of she (Bailey) holding the gun and said it had to be De Freitas who had posted it to social media.

In mitigation, Bailey told the court she has four children — two daughters aged 14 and 10 and sons aged 7 and 5 — all of whom live with her.

She said the children were playing at the neighbour’s when she found the gun.

Bailey told the court that her brother would send money to pay a fine.

De Freitas, on the other hand, told the court, “They say the truth will set me free. That is why I told Sergeant Pitt—”

However, the chief magistrate told him that the matter had gone past that stage.

De Freitas then said his girlfriend is four months pregnant and it will be very hard for her.

He asked to be fined, telling the court he works at a bakery part time.

Before his submission on sentencing, Cato showed the court the Facebook post, Bailey having confirmed it was the same one she saw on Facebook and that it is she in the photo holding the gun.

Cato noted that in her caution statement, Bailey said that two photographs were taken of her with the firearm.

“And she is saying she had no idea how that photograph ended up on social media,” Cato said, adding that Bailey said she also questioned De Freitas, who said he did not know either.

“So I do not know what magic was performed to have two photographs taken by each accused and it ended up on social media,” the prosecutor said.

He said that Bailey’s action after discovering the firearm was striking.

The prosecutor said that the photograph of Bailey posing with the gun was still circulating on social media.

“What message is she sending to the public to take a photograph like that. And the words attached to that photograph, describing the calibre of the weapon and the place where that weapon is. And asking a question in a sly way, God knows what can be done with this in Park Hill.”

Cato said Bailey did not encourage De Freitas to remove the firearm.

“She didn’t go to her boyfriend and say, ‘There is a gun in the storeroom. This is trouble. Tell Glendon to remove it.’ She put it back and put clothing on it — her clothing on it.”

The prosecutor said the court should take into account the public interest factor in the case “because everyone has all sorts of comments to make as relates to this photograph.

“The court is not pleasing the general public but it is something the public is looking forward to with a young woman with a firearm brandishing against her chest,” Cato said.

He noted that Bailey, in mitigation, had spoken about her children.

“This seems to be the last thing people think about when committing crime,” Cato said.

The prosecutor said that were it not for Pitt’s professional thinking, the weapon could have still been in Bailey’s house, where the same children live.

“Suppose it was one of her children who went there and found that. And these are the same children that the defendant is trying to put before the court and expect leniency before the court with this kind of behaviour,” he said.

Cato told the court there must have been a common understanding between the defendant that he would see it fit to put the gun there, and, having been confronted, to leave it there.

The prosecutor noted that the maximum sentence for possession of an unlicensed firearm.

He said that based on the prevalence of firearm offences, the public interest factor, and the serious nature of the offences, precedence and the facts and circumstances surrounding the case, “in my judgement, there is no other fitting place for both defendants than Her Majesty’s Prisons where they can sit and reflect on their actions and where they went wrong”.

At this point, Bailey began to cry and leaned over the dock and begged the court not to send her to prison.

She said that her brother was willing to send money to pay a fine.

“A .380 is not a joke weapon and, as I indicated earlier on, those words that were branded on that post caused alarm in St. Vincent and the Grenadines. That’s why the police reacted,” Cato said.