Zipporah John jailed for 40 months for 39kgs of cocaine 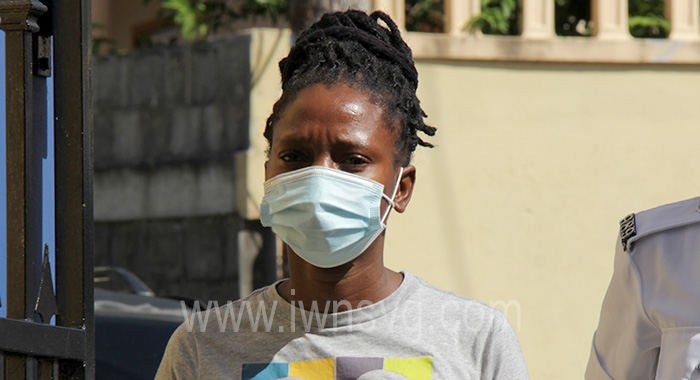 Zipporah John arrives at the Serious Offences Court for her sentencing on Monday, May 9, 2022.

The woman who was nabbed with 38kgs of cocaine in Union Island on April 25 has been ordered to spend 40 months in prison.

That was the sentence for possession of 38,707 grammes of cocaine drug for the purpose of drug trafficking that Chief Magistrate Rechanne Browne handed down on Zipporah John, 32, on Monday at the Serious Offences Court.

John, who is originally from Barrouallie, was also sentenced to 36 months in prison for possession of the drug. Both sentences will run concurrently.

Browne summarised the case, saying that on April 25, Corporal Mikail Bowens and a team from the Rapid Response Unit executed a search warrant at John’s home, where the cocaine was found in two sealed buoys in a plastic drum.

John pleaded guilty to the charge.

The prosecution, represented by Station Sergeant of Police Renrick Cato, placed the value of the drug as over EC$1 million.

The court, having concluded that the offence fell into category one and John’s role was significant, established a range of 35-65% of the maximum sentence, or 53 months.

The aggravating features of the case were the sophisticated manner of concealment and the fact that the drug was cocaine.

“And we know the effect that substance has on lives,” Browne said.

She also spoke of the prevalence of cocaine offences in St. Vincent and the Grenadines.

The court found no aggravating feature of the offender and concluded that John being mistaken about what the substance was, as pointed out by her lawyer, Grant Connell, was a mitigating feature.

After considering the aggravating and mitigating features of the offence, the court added six months to the sentence.

The court found no aggravating feature of the offender, adding that mitigating was the fact that she had no previous conviction, had shown extreme remorse, and has dependant children, though they live with other relatives.

When these features were weighed, six months was deducted from the sentence.

The chief magistrate noted that John pleaded guilty at the first opportunity and was accorded a one-third discount — 17 months.

She said that after doing the mathematical calculations, the court had arrived at a 36-month sentence for the possession charge and 40 months for drug trafficking.

The court ordered the destruction of the drug and informed John of her right to an appeal.

The time on remand, calculated as 12 days, is to be deducted from the sentences.

John pleaded guilty on April 27 and was remanded in custody until last Thursday, May 5 for sentencing.

However, the sentencing did not take place on Thursday as Connell told the court that John’s family had since indicated that they would be willing to help her to pay a fine.

In his initial submissions, Connell had told the court that John was of limited means, and Cato, noting this, had asked for a custodial sentence, pointing out that the alternative for non-payment of a fine is one year in prison.

In handing the sentence, the chief magistrate noted that each case must be accessed on its merit.

She pointed out the principles of sentencing, namely retribution, deterrence, prevention and rehabilitation, adding that the court must also consider case law and precedent, as well as the Eastern Caribbean Supreme Court sentencing guidelines and the law, which says the court can fine up to EC$500,000 or a custodial sentence of seven years or both.