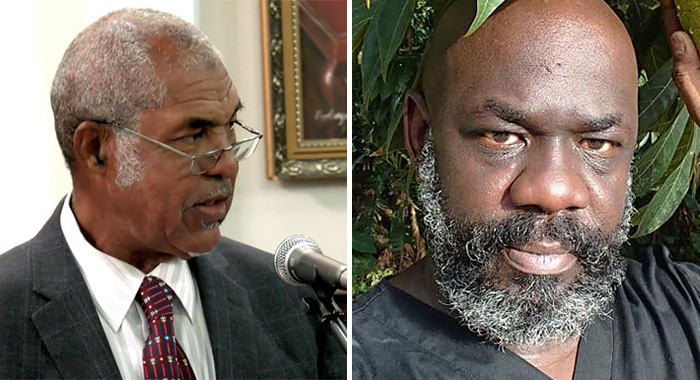 Minister of Lands, Montgomery Daniel, left, speaking in Parliament on May 5. Dr. Wayne Murray is at left.

While Minister of Land, Montgomery Daniel told Parliament, on April 5 that the government had paid a family half of the cost of lands acquired in Richmond Hill in 2020, the family says they were only told, one day after the minister’s statement that a payment was ready.

Daniel said the government had not paid the family of Dr. Wayne Murray the remaining EC$432,900 because the family “never” had proper title for the lands.

He was responding to a question in Parliament from East Kingstown MP, opposition lawmaker Fitzgerald Bramble.

However, Murray, speaking on radio on April 6, accused Daniel of misleading the public and demanded an apology.

“I want and I will send this message to that Minister Gomery, I expect him to make a public apology relative to those statements which he made. Until he does that I will consider it to be one that was done in spite and evil. And I will wait for his response on that,” Murray said.

In August 2020, the Ralph Gonsalves government acquired a portion of land that has been in the family of Dr. Murray’s wife for 100 years.

The acquisition came after the family gave notices to vacate to non-compliant tenants who had rented the lands over a 25-year period.

The government’s decision came after the Murrays moved, earlier in 2020, to enforce 5-year-old court orders for tenants to vacate the lands that the family had rented to them.

The government acquired the land without having any conversation with the family to try to understand the situation.

Dr. Murray’s wife, Simone Murray, the manager of the McLean estate in Richmond Hill, of which the lands are a part, told iWitness News she felt as if she was living in a communist state with the manner in which the government had acquired some three acres of the land.

During the meeting of Parliament this month, Bramble asked Daniel about the status of the acquisition as well as the amount of money paid or to be paid to the family.

He also wanted to know whether the tenants will be allowed to own the plots of land that they will be occupying; and if the government will be assisting the tenants with building homes on the newly acquired lands.

“This question that is before this honourable house, this will bring personal matters of a private nature into the public business. I don’t know whether or not if the representative wants to have it done.”

He went on to tell Parliament that the Lands and Surveys Department valued the land acquired from the Murrays at just over EC$865,000.

“Yes, he was collecting monies from the tenants but when the assessments were done, proper title was not established in the name of Dr. Murray. And so, part payment is being done and another part payment will be done in due course.”

Daniel said the Land and Surveys Department was in the process of compiling the names of all of the occupants of the land.

“He stated in Parliament that my family was in receipt of, in essence, and in excess of $400,000, which is half of the amount relative to the acquisition of my family’s property, which is not true. It’s blatantly, not true.”

He said that the minister’s statement had the effect of causing people to believe that he and his family had lied to them about not being paid.

Dr. Murray further said that at no point did he claim to have had title to the property.

“It’s always been stated that this property is in the title of my wife’s family and that my wife, through her grandmother, has direct control, as she was the manager of all the properties. And she is the one via which the tenant was engaged in any rent from.

“Clearly, I, being her husband — unlike many of the ULP husbands who don’t stand up behind their  wives — I stand behind my wife. And I supported her in this principle that what was done to us was wrong.

He said MPs should be informed about the issues they comment on in Parliament.

“And, therefore, such was not the case because people believe they can sit in Parliament and not be liable for statements.

“But what it does, it demonstrates ignorance of the highest order. And because he went into Parliament and made a statement, today, my family is being contacted to state a payment was made to you and it’s  in the [Treasury],” Murray said.