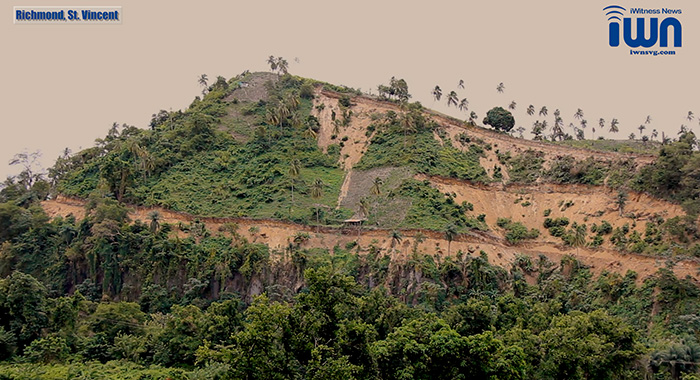 The quarry site in Richmond in February.

The government has waived the payment of value added tax (VAT), import duties, excise duties, and customs service charge on the importation of all plant and machinery, heavy equipment, motor vessels and motor vehicles to be used by the company setting up the quarry in Richmond.

Further, the government has granted Rayneau Construction and Industrial Equipment Ltd. a 100% exemption from corporate income tax and withholding tax for 15 years in the first instance.

The government would consider whether this exemption should be continued in the future, depending on circumstances, according to the agreement that Prime Minister Ralph Gonsalves signed on April 8 on behalf of his government.

The Unity Labour Party government has leased 58.8 acres of land to the St. Lucia company for 30 years for the operation of a stone quarry.

The opposition New Democratic Party has criticised the deal and has said that the quarry should be shelved.

Leader of the Opposition, Godwin Friday brought a motion in Parliament saying the quarry should be “halted immediately pending satisfactory consultation with residents, including farmers, business people, fisherfolk and public sector workers, a satisfactory environmental impact assessment of the project, and a satisfactory review of the financial arrangements between the Government and Rayneau Construction concerning the project”.

In presenting the motion on May 5, Friday noted that Minister of Lands, Montgomery Daniel had refused earlier in that day’s sitting of the national assembly to disclose the concessions that the government had granted to the quarry company.

“… he tells me it is a public document and I must go look for it myself — paraphrasing, of course — to try and find out. So I went and I got it,” Friday said.

“I mean, you have a big project of this magnitude; they don’t come out and brag about it and say to people, ‘Look, this is what we’re going to bring for North Leeward.’”

He noted that the government is granting Rayneau a waiver of 100% of the VAT, import duties, excise duties, customs service charge on the importation of all spare parts for the plant and machinery, fuel, lubricants, explosives and all other direct materials and supplies necessary for undertaking quarrying, crushing and relevant and related operations.

The waiver of the customs service charge shall expire after the third year.

The opposition leader pointed out that the agreement is also for a waiver of 100% VAT, import duties, excise duties and customs service charge on the importation of all replacement quarry-related plant, equipment, machinery, heavy equipment and motor vehicles.

Again, the waiver of the customs service charge expires after three years.

“It goes on to say a waiver of export taxes and levies on the export of all quarry material from the Richmond quarry.”

The opposition leader noted that based on the company’s own sales plan, 91% of the aggregate and stones quarried will be for export.

“Yet all of that export will be done without any export taxes and levies on the export of all quarry material from Richmond.”

Further, the agreement says the government will allow and assist with all approvals to build a jetty and manage the jetty.

“That jetty was built in no time at all with disregard for the environmental impact, the fishers who use Cavalli Rock and so forth will now have to share it,” he said, referring to an iconic rock near to the jetty.

Friday noted that the government will get from Rayneau EC$12,000 annually for lease of the 58.8 acres of land, which is estimated to contain 25 million tonnes of quarriable rock.

“They say Rayneau shall pay $2 per tonne of materials quarried at the Richmond site and sold, either exported or locally…”

He noted that the agreement said Rayneau will give the government an 8% discount on any quarry products that it purchases.

This means that with the going rate of EC$70 a tonne, the government would pay EC$64 instead.

“You own the rock, you own this whole ridge. It’s yours. You say you need it for development to build roads and to build the port in Kingstown. But you privatise it and it’s all-okay, I will buy it back from you. But remember you got to give me a discount, 8% off. And even on that you’re giving me $2 per tonne on it.

“This is the kind of deal that in any language, they will tell you it’s a steal of a deal. It is too good, too good to be true; too good to be true. And all of this without taking the environment into consideration without first considering how it’s going to affect the people, the farmers and the people in the areas. All of this now is coming after the fact.”

He reminded lawmakers that Daniel had said that the Rayneau is expected to mine about 400,000 tonnes of rock per year, grossing EC$28 million annually.

“Out of that, you know how much the country gets, the government gets? The people get $800,000 and that is based on the price of the aggregate here in St. Vincent. But don’t forget, Rayneau, in his own sales plan, says that 91% of that will be sold overseas.”

The opposition leader noted that Rayneau’s sales plan says that its operation in St. Lucia exports aggregates to Guyana and that the St. Vincent operation can only complement its export market

“So it’s a possibility that this will be sold in Guyana. You think they’re going sell in Guyana for $70 per tonne?

“And we still get — that is we, the government, the people — $2 per tonne. Who negotiated this deal?” Friday said.

“What was the reason for inviting someone to develop something that you say is an asset to this country, simply for them to essentially be the chief beneficiary of it? Why was this project even conceived?”

The opposition leader said that Rayneau’s operations plan says that its plant would operate seven days a week.

Friday further told Parliament that “Rayneau’s environmental social management plan” that it presented to the government identified no adverse impact on the enjoyment of human, civil rights, political rights.

“What is amazing is out of over 30, 40 items not a single one of them said that there was any risk. Every one of them was ticked off, ‘no’.

“This ought to be a perfect project. But of course, it can’t be because this is self-serving. This is a developer himself doing this to get the project approved. And maybe he believes that this is what it is. But the point is, you must have the independent agency doing it, coming between the people and the developer to represent the interest of the people.”

Friday said he has no objection to quarrying if it is done in a responsible way, for use for the country’s needs.

He noted that a quarry was opened in Bequia to provide rocks for the construction of the J.F. Mitchell Airport and closed after.

“This notion of exporting, just ripping aside the land because it’s nice rocks and sending it abroad, where does it end?

Friday emphasised that Rayneau was invited to set up a quarry in North Leeward.

“This is one of the most outrageous and bad deals on behalf of the country. And it needs to be examined much more closely. The government needs to review the financial arrangements and everything else associated with that project,” Friday said.

The motion was defeated when government lawmakers voted against it on May 11.