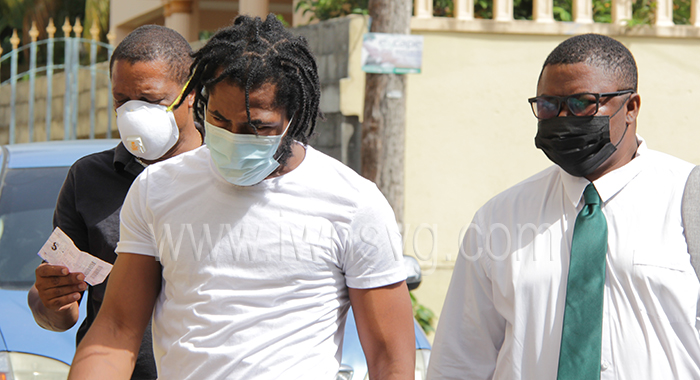 A butcher has been charged with murder after a man he allegedly stabbed two months ago died of his injuries last Saturday.

Curtley “Beenie Man” Nanton, 22, of Belair was initially charged with wounding with intent in connection with the injury he allegedly inflicted on Jevorne Gibson, 24, a labourer of Welcome, on March 22.

It is alleged that on March 22, Gibson went to James Questelles’ shop, in Belair, to buy something.

Nanton reportedly offered him a drink, which he refused.

Gibson exited the shop and Nanton is said to have struck him on the shoulder.

An altercation ensued and other patrons parted the men and Gibson walked out of the shop.

After he exited the shop, he was reportedly stabbed in the torso, leading to his hospitalisation from that day until his death last Saturday, bringing to 18 the number of homicides in St. Vincent and the Grenadines this year.

Nanton had initially been charged with wounding with intent and had been granted bail.

Nanton appeared before the Serious Offences Court, in Kingstown, today (Thursday) where he was read a charge that on May 14, at Kingstown, with malice aforethought, he caused Gibson’s death.

Prosecutor Station Sergeant of Police Renrick Cato told the court that the Crown has 16 witnesses on file.

The chief magistrate said that she was certain that the investigator — detective Constable PC 647 Roberts of the Criminal Investigations Department, Calliaqua —  would be well advanced with his investigation.

“It is just a change in the charge so he will continue at the same pace,” she said and remanded Nanton in custody until July 7.

Cato then withdrew the wounding-with-intent charge against the accused.

One reply on “Butcher charged with murder over stabbing death”