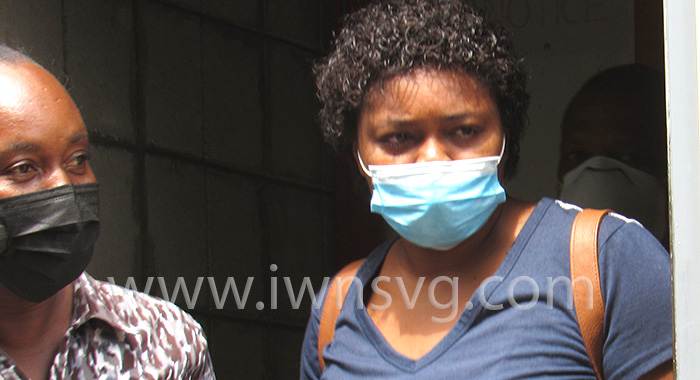 The defendant, Maruth Francis, right, is escorted to prison on Monday, May 23, 2022.

Prosecutor Station Sergeant of Police Renrick Cato has asked the Serious Offences Court to give a “short, sharp shock” of a prison sentence to a hotel worker who stole US$1,140 from a member of the delegation of the Indian president that visited St. Vincent last week.

Earlier today (Monday), Maruth Francis, of Sandy Bay and Diamond, pleaded guilty to a charge that  between May 14 and 19, 2022, at Villa, she stole US$1,140, the property of Anju Sharma, of Suriname.

The facts of the case are that Sharma, who works at the Embassy of Indian in Suriname, travelled to St. Vincent as part of the advance party that arranged the presidential visit.

Sharma stayed at Beachcombers Hotel and made reservations there for the presidential delegation.

Francis was assigned to clean Sharma’s room during her stay.

On the afternoon of May 14, Sharma spoke with her mother, who told her to secure her money because she is in another country.

Sharma, therefore, went to her room and counted the money, which she had in her laptop bag.

Sharma wrapped the money in a piece of paper and placed  it back in her bag, which she put in the clothes cupboard.

On May 19, about 9 a.m., Sharma along with the Indian First Lady, Savita Kovind, was going out so Sharma went to check on her bag and found that it only contained US$20.

After the discovery, Sharma sat for 20 minutes, unable to believe what had happened.

She then went and checked again. She checked a third time and then reported the matter to the hotel manager.

The matter was reported to the police and detective Corporal 858 Hoyte conducted an investigation, during which he recorded a statement from Francis.

Police also conducted a search at Francis’ home, during which they recovered a Bank of SVG  pass book.

The detective questioned Francois about the transaction and she said that her boyfriend had sent money to her.

Francois was taken to the Calliaqua Police station, where she was cautioned and interviewed in the presence of justice of the Peace Joel Woodley.

During the interview, she admitted to stealing the money. Police recovered EC$1,790 from Francis.

In mitigation, Francis, who was not represented, told the court that she has a 3-year-old child and asked to be given an opportunity to repay the money.

In his submission on  sentencing, Cato told the court that Francis was placed in a position of trust, and breached that trust.

He further pointed out that the Indian delegation had donated money to charity in St. Vincent but Francis stole from them.

The chief magistrate remanded Francis into custody until her sentencing to Tuesday.