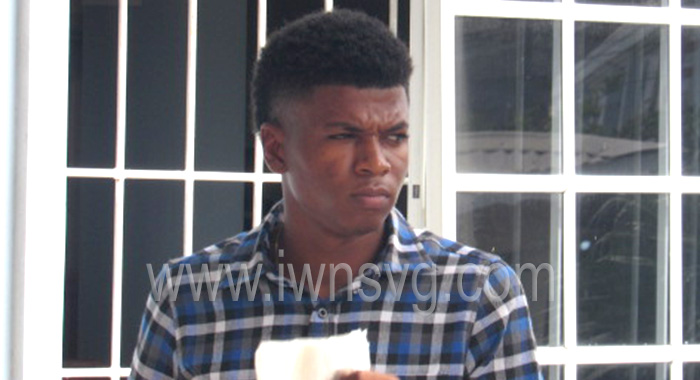 The defendant, Zackrie Latham outside Calliaqua Magistrate’s Court on Monday, May 30, 2022.

The trial of Zackrie Latham, the ex-police officer charged in connection with the theft of firearm and ammunition from the Georgetown Police Station last year, has been adjourned after a no-show by the prosecutor and the police chief — who was summoned as a witness.

The trial was set to continue on Monday, at the Calliaqua Magistrate’s Court.

However, Devon Bute of the Office of the Director of Public Prosecution, asked for an adjournment, saying that the prosecutor, Crown Counsel Maria Jackson-Richards, was on sick leave and would not be back until June 3.

Defence lawyer Grant Connell, who, on May 17, requested summonses for Commissioner of Police Colin John and other witnesses, noted John’s absence.

He told the court he was aware that the commissioner is out of state and would not be back until June 4.

Magistrate Zoila Ellis-Browne adjourned the matter to Aug. 30, stating, “… in terms of my own availability for next week, that is not going to happen”.

Connell then rose and asked if, light of the adjournment, the reporting conditions that form part of Latham’s bail conditions, could be revised.

The court had ordered that Latham reports to Colonarie Police Station on Mondays and Thursday.

Bute had no objection to the reporting condition being revised.

The court ordered that Latham report to the Colonarie Police Station on Saturdays between 6 a.m. and 8 p.m.

However, on May 17, the court upheld no case submission on 10 of those counts, placing Latham on his defence on three of the charges.