In letter, Gonsalves urges regional leaders to boycott Summit of the America 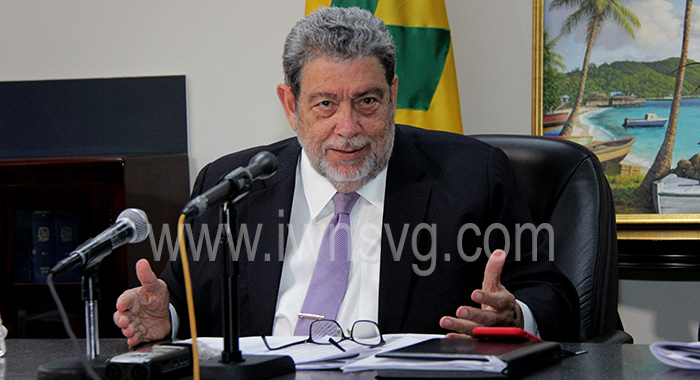 By Peter I. Richards

BRIDGETOWN, Barbados (CMC) — St. Vincent and the Grenadines Prime Minister Ralph Gonsalves is urging Caribbean Community (CARICOM) leaders “not to attend” next month’s Summit of the Americas to be held in the United States.

“I realise it is a difficult decision, but our American friends have left us with no other credible, principled, and practical choice. We may yet persuade them to alter their posture,” Gonsalves wrote in a letter to all the CARICOM leaders and copied to the CARICOM Secretary General, Carla Barnett.

Caribbean leaders are still undecided as to whether or not they will boycott the June 6-10 summit if Washington goes ahead with its plans not to invite the leaders of Cuba, Venezuela and Nicaragua to the event.

In addition, the regional leaders had also expressed their opposition to Venezuelan Opposition Leader, Juan Guaidó leading a Venezuelan delegation to the event.

CARICOM chairman and Belize Prime Minister, John Briceño had confirmed that Washington is lobbying for CARICOM to change its position and not boycott the summit that the United States said is expected to focus on “Building a Sustainable, Resilient, and Equitable Future” for the hemisphere.

In his May 11 letter, a copy of which has been seen by the Caribbean Media Corporation (CMC), Gonsalves, one of the longest serving leaders in the 15-member regional integration movement, wrote he is “very aware that CARICOM governments’ good relations with the USA are of paramount importance.

“However, our relations are too close, and our self-interests too tightly inter connected for there to be any lasting rupture, certainly not more than a temporary dissonance. Our friendship has to be grounded elemental respect, and the truth be told, we have been profoundly disrespected and disregarded by our American friends on this matter.

“Certainly, they are pulling out all the stops to persuade us to accept their ignoble stance; it is not a genuine dialogue as to what is best for our Americas,” Gonsalves wrote in the five-page letter to the regional leaders.

He warned that CARICOM “is in danger of finding itself in an uneasy position given the public declarations of several Latin American governments of their non-attendance of the summit either at the presidential level or at all”.

Gonsalves said he had held out hope that Cuba “may endorse CARICOM’s attendance even in its absence,” but that “is more unlikely to happen.

“The Cubans have principle and practicality on their side. We are at this sorry pass because of the decision of the US government,” Gonsalves wrote, adding “so the option of attending the Summit and protest strongly in our own language regarding the non-invitation to Cuba, Venezuela and Nicaragua is, in my view, not viable in both principle and practice”.

In his letter, the 75-year-old Gonsalves wrote that he has been giving the matter “mature consideration” and following discussions with various people, including representatives of the United States government and leaders of civil society across the Caribbean, he has “arrived at the conclusion that CARICOM leaders ought not to attend the Summit in Los Angeles … unless the US government alters its position” regarding Cuba, Nicaragua and Venezuela.

In outlining what he described as “the basic reasons” driving his conclusion, Gonsalves wrote that CARICOM leaders at their inter-sessional summit in Belize in March had “declared publicly that CARICOM will not attend the Summit if Cuba were excluded and/or if Mr. Guaidó was invited, preposterously, to represent Venezuela.

“This stance was repeated by Belize Foreign Minister in a meeting last month between CARICOM’s Foreign Ministers and the Foreign Minister of Canada. If CARICOM, or part thereof, now attends, I fear that irreparable damage would be done to CARICOM, at least in the immediate future. I feel certain that our people, with justification, are likely to damn us,” Gonsalves wrote.

Earlier, Trinidad and Tobago Prime Minister Keith Rowley said he was hoping in the “not too distant future” CARICOM leaders would adopt a position on attending the Summit of the Americas.

The regional leaders had held a virtual meeting on the issue, but failed to reach consensus on the matter.

“We discussed this matter and we are still discussing it and people have different views and we are trying to come to a consensus position because we would like to have a CARICOM position, but sometimes it is difficult for all of us to see eye to eye on everything all the time,” Rowley told a news conference.

However, an informed source told CMC that while a draft statement providing the regional leaders position on the matter had been sent to the CARICOM leaders for their endorsement, consensus has not been reached.

“They could not agree on the statement,” the source told CMC.

The US State Department, in a statement announcing the Summit of the Americas, had indicated that “as Chair and Host, the United States will work with the region’s stakeholders toward securing leader-level commitments and concrete actions that dramatically improve pandemic response and resilience, promote a green and equitable recovery, build strong and inclusive democracies, and address the root causes of irregular migration”.

11 replies on “In letter, Gonsalves urges regional leaders to boycott Summit of the America”